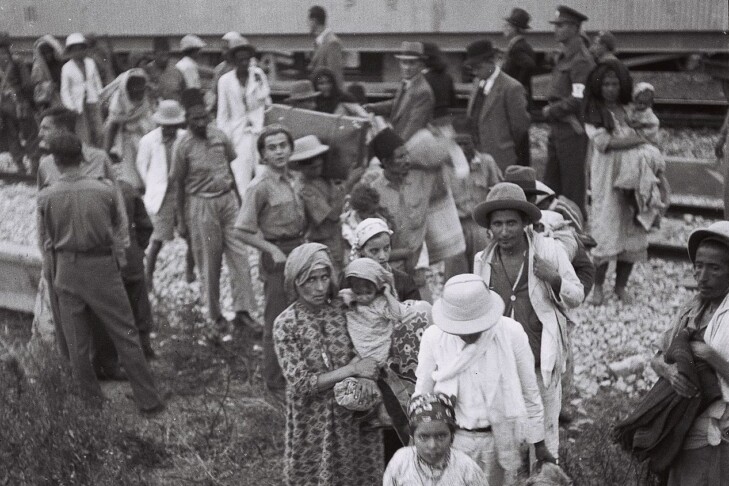 For over two millennia, Jews lived relatively peacefully across the Middle East, North Africa and Iran. Although periods of persecution and pogroms disturbed life, the Jews in these countries notably embraced the cultures of their surroundings. According to Dana Avrish, a multidisciplinary artist, curator, interior designer and Mizrahi Jew based in Tel Aviv, many of these communities flourished until 1948. Israel’s founding set off a cataclysmic expulsion for Jews who considered countries such as Iran, Libya, Syria and Yemen as home.

Avrish is a descendant of Jews from Lebanon, Syria and Iran. She spent five years researching her own history and that of fellow Mizrahi Jews. Her research culminated in a powerful exhibit at Eretz Israel Museum in Tel Aviv called “Leaving, Never to Return: The Journey of the Jews of Arab Countries and Iran.” Avrish talked about the exhibit and the history of Mizrahi Jews on a webinar hosted by the Consulate General of Israel to New England, with co-hosts AJC New England, Lappin Foundation, CAMERA and JIMENA.

Avrish was invited to speak about “Leaving, Never to Return” on Nov. 30, officially designated in 2014 as the “Day to Mark the Departure and Expulsion of Jews from Arab Countries and Iran.” The day is a culmination of years of lobbying on behalf of Mizrahi Jews to be recognized culturally and historically in Israel. It symbolically falls on the day after the Nov. 29 adoption of the 1947 U.N. Partition Plan for Palestine. Although the day has garnered global attention, Avrish asserted that “too little has been raised about the status of Arab Jews, including the issue of Jewish refugees and restitution of property and the equivalent.” Avrish calculated that if Jews in just half the Arab countries from which they were expelled were compensated for the properties confiscated from them, the sum would be a staggering $150 billion.

In the watershed year of 1948, more than 850,000 Jews fled their countries in the Middle East and North Africa. Most of them went to Israel. “Suddenly, these Jews were refugees overnight,” said Avrish. “Leaving, Never to Return” refers to the brutal finality with which their exit papers were stamped. Avrish illustrates the installation’s title with the stark image of individual suitcases she has filled with photographs, documents and newspapers from countries such as Egypt and Syria. These artifacts bring a forgotten past into the present day.

Avrish highlights 11 countries where Jews were part of the Arab narrative and Middle Eastern storytelling. In her talk, she emphasized that there is “a pressing need to correct the injustice done to Jews in Arab lands by giving them a platform to have their stories heard and their contributions and connections to the countries they once called home.” Avrish’s assemblage of everyday items takes on the sheen of historical import. She brings back a bygone world through examples of ceremonial dress, instruments and workaday documents. She even displays a piano that once belonged to a Jewish Tunisian singer.

For Avrish, deciphering a millennium of cultural, social, religious and even political strands is wrapped up in the symbolism of a single suitcase. “There was just one direction of travel [for Arab Jews] who were allowed only one suitcase, shrinking down all of their cultural assets,” she said.

Avrish also wanted to memorialize the good times in these communities. She noted that rich and diverse rituals, costumes, sounds, music, tastes and smells made for a joyous life for Middle Eastern and North African Jews. “These communities flourished,” she said. “Jews were integrated into the country’s economy and tapestry of life.” Avrish added that Jews participated in all aspects of society as educated professionals and successful merchants.

“Every community,” she observed, “is faceted, but the strong denominator across these countries was the Jewish religion and tradition. It influenced Jewish identity and communal unity. Judaism was the guardian unifying and influencing the structure of these communities.”

Avrish said it was initially challenging to find a space that would host “Leaving, Never to Return.” She vigorously campaigned the Eretz Israel Museum to host the exhibition. She said museum officials eventually recognized that the chosen objects —both secular and sacred—“shed layers of life, including social and economic. Each item that was photographed was selected to show the unique story of a community.” In the end, she was satisfied that the exhibit parsed the Mizrahi experience in each of the highlighted 11 communities.

Avrish added that among the rewards of curating such a pivotal and personal exhibit was the “excited reaction of attendees. This silent history was given a voice. I feel a sense of responsibility to raise awareness and to provide a central place to expose this history. To illustrate these stories is a testament to those magnificent communities. My goal was to raise and empower community members, showcase the diverse sides of their modern lives and break down misconceptions in Israeli society. I wanted to complete the missing pieces of this historical mosaic.”