Close
Never miss a great event again!
Get the best Jewish events delivered to your inbox every Thursday with JewishBoston This Week.
By signing up, you agree to our Terms of Use and Privacy Policy.
CJP Fund to Aid Children and End Separation
View all 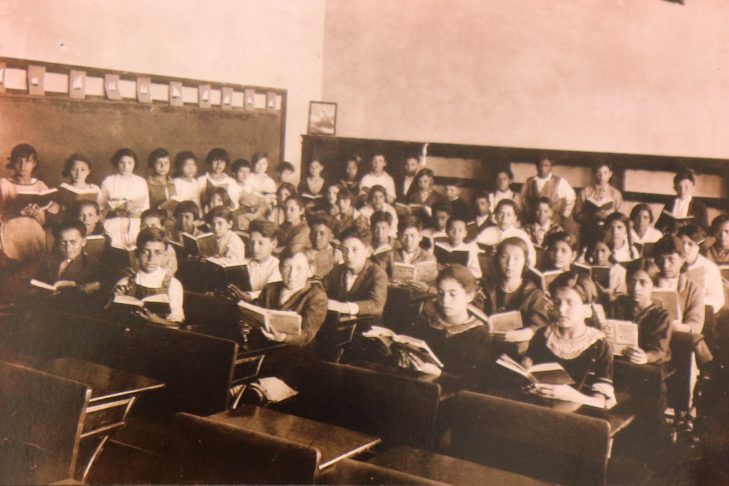 As I arrived in Texas this week with a CJP mission, my thoughts went back nearly a century. One hundred years ago next April, my grandfather arrived in El Paso, Texas, as a refugee from Mexico.

Jose Casillas Sandoval was 4 years old when he crossed the Rio Grande with his parents and his older siblings, fleeing the violence of the Mexican Revolution. I imagine what he would have endured if he had been separated from his parents at the border, if they had been turned back—to violence and bloodshed—by a nation with a hardened heart.

The Texas my Grandpa Joe grew up in wasn’t always an easy place to be a Mexican-American; children like him attended separate, segregated, Mexican-only schools. But he became a citizen and a patriot. With the help of a union apprenticeship, he finished high school and learned the skills he needed to operate and repair heavy machinery in the California steel mills. He served in World War II and built upon the knowledge of electronics that he acquired in the Navy. With a good job at a good wage, he had a ladder to the middle class. He would become a respected leader in his church and community.

We came to San Antonio this week to learn about and to volunteer with the groups supported by CJP’s Fund to Aid Children and End Separation (FACES). In the wake of the recent family separation crisis at our Southern border, Boston’s Jewish community has once again responded by putting our values into action; to reunify families and support migrants during trying times.

We learned about the work of the Young Center, CJP’s largest grantee in this fund, which is trying to change our immigration system so that children are recognized as such and treated in accordance with the Convention on the Rights of the Child. They are working tirelessly around the nation to reunify families, including in some of the hardest cases where parents have already been deported.

We provided service at the Interfaith Welcome Coalition (IWC), an all-volunteer partnership that welcomes refugees and asylum seekers, particularly women and children. We packed backpacks with basic supplies to be distributed to migrant children.

We saw with our own eyes how some of these families are dumped at the bus station in San Antonio by ICE after being released from detention—they’ve been given a chance to wait for a review of their asylum petition that can take weeks or years, but are left to fend for themselves with little or no resources. Terrified, traumatized, they need and receive immediate intervention and accompaniment from IWC until they can reach the next step in their journey to safety.

Both these organizations existed and have been working in the trenches long before the crisis of recent months. The brokenness of our immigration system goes back decades. The fears and the horrors that immigrant families face are not confined to the border.

Parents have been ripped away from their children by ICE here in Massachusetts too. People fleeing persecution from their home countries, seeking asylum, arrive at our borders and are shipped to different detention centers around the country, including jails here, in our city.

JCRC is doing what we can to offer support as these families resiliently fight to stay together. We are part of the Boston Immigration Justice Accompaniment Network (BIJAN, pronounced “beyond”), a growing effort among faith organizations and communities. We are finding pro bono attorneys to support people facing deportation who would not otherwise have legal representation, along with more than 60 percent of detained immigrants nationally. We are raising money to bond people out of detention so they can be with their families while their cases proceed. We are organizing synagogues participating in three sanctuary networks—in Newton, Jamaica Plain and Cambridge—to help families avoid separation during this crisis.

This moment calls on us to do our work differently. It calls on us to be proximate to one another in ways we may have never been before—we live together; we pick each other up after release from detention; we have meals together; we are in close contact with each other’s families. Through it all, we are building a deeper community founded upon dignity and doing more than we have before.

I keep a picture of my Grandpa Joe on my desk, sitting in that segregated classroom. It reminds me of his story. It keeps me proximate to this part of my family’s immigrant experience and to a story of our nation’s past. It is a picture of the opportunity and of some of the hurdles we have offered to those arriving here fleeing violence and persecution. It is a picture of where we’ve come from and who we might become again.

Synagogues and others in Boston’s Jewish community understand this journey and are determined to place the values of welcoming and compassion back at the center of our society. We are choosing to be proximate with our new neighbors. And on Wednesday, Aug. 15, I hope that you will join us at 7 p.m. at Temple Emanuel in Newton to learn more about this work and how you can support people in our community right here in Massachusetts as they face the horrors of family separation and detention.