The first time Justice Ruth Bader Ginsburg watched the documentary about her life thus far, she was in a theater with 500 people at the Sundance Film Festival. Across the aisle sat the film’s co-directors and producers Julie Cohen (“Dateline,” “Ndiphilela Ukucula: I Live to Sing”) and Betsy West (“60 Minutes,” “MAKERS: Women Who Make America”), watching her with bated breath. The idea to make a documentary about Ruth Bader Ginsburg came to them in 2015. Funding was acquired in May 2016, and on Jan. 21, 2018, after 15 months of shooting and six months of editing, “RBG” (Magnolia Pictures, CNN Films, Participant Media) premiered to the world.

“RBG” kicks off with a fantastic, high-energy opening credits montage—featuring clips of Ruth Bader Guns-burg working out in her “super diva” sweatshirt and scored to Gioachino Rossini’s “The Barber of Seville” overture—followed by a video close-up of then-Sen. Joe Biden (aka “Uncle Joe” or “Diamond Joe Biden”) asking a question at Justice Ginsburg’s 1993 nomination hearing. The frame lingers on Biden’s blue eyes, making us millennials swell with one of our favorite things: nostalgia. (The film was made with us in mind, after all.)

An action-packed documentary, “RBG” is a sublime tribute to the Notorious RBG, human rights champion, pop culture icon and all-around badass woman who never let her gender stop her from pursuing her dream, and to Martin Ginsburg, the love of her life who supported her all the way. It is, according to West, a “feminist modern romance.” 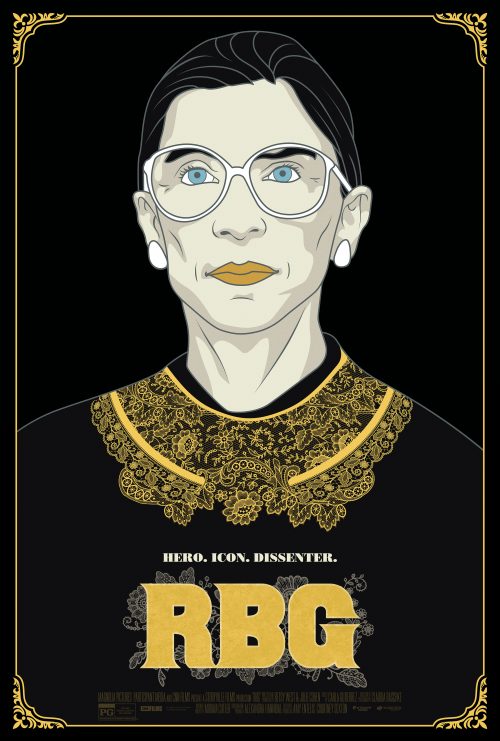 What makes the film so successful is the dynamic medium through which its story is told: A treasure trove of video footage and photographs, including honeymoon reels, grainy tapes of early family life and filmed remarks from Justice Ginsburg’s late husband over the years, transform the documentary from career biography to love story. Exclusive interviews with Justice Ginsburg’s children and granddaughter, Clara, NPR’s Nina Totenberg, Gloria Steinem, former President Bill Clinton, Sen. Orrin Hatch, R-Utah, a few of the faces behind her digital brand and many others further develop a more comprehensive picture. There are also original audio recordings of RBG delivering oral arguments and Supreme Court opinions, transposed with her re-reading them on-camera for this documentary. Hearing the same passion in her voice 45 years later elicits the best kind of goosebumps. Oh, and you get to watch her hold a plank for 30 seconds. #Fitspo

There is, however, an element of personal introspection missing that would only have elevated the film. Although there are special moments of her husband and kids making fun of her cooking, the documentary would have been more relatable if there was an exploration of how RBG develops herself, what she perceives her flaws to be and how she works to improve them.

So, in that sense, while not a complete portrait of an extraordinary woman, “RBG” contains such gems as Justice Ginsburg reminiscing about doing parkour before parkour was cool (she not only jumped rope, she jumped roofs), that time she wrote and performed her own lines in an opera, her genuine friendship with late Justice Antonin Scalia and watching Kate McKinnon dish out “Ginsburns” on “SNL.”

One of the best moments in the entire documentary takes place during the five minutes the crew was allowed in Justice Ginsburg’s Supreme Court office, captured thanks to fast camera work by cinematographer Claudia Raschke. After explaining a few of the photographs adorning her bookcases, RBG walks over to her closet and shows her jabots to the camera, including the golden one she wears to give majority opinions, her infamous dissent collar and a gorgeous white lace design from Hawaii. A testament to the true organic nature of the moment, you can hear West off-screen exclaiming, “People just send them to you?”

West shared that behind-the-scenes treat, as well as other insights, during a brief Q&A at the “RBG” Boston premiere at the National Center for Jewish Film’s annual festival on May 2 at the Museum of Fine Arts. When she and Cohen approached Justice Ginsburg with the idea for a documentary about her, she replied that she would be free for an interview in two years. As the project moved forward, Justice Ginsburg named a few people she recommended they interview but gave no indication of her schedule. It wasn’t until two years later, in the summer of 2017, that she sat down with them for an interview…exactly when she said she would.

West also revealed that Sharron Frontiero, the plaintiff in Frontiero v. Richardson (1973), the first case RBG argued for the ACLU in front of an all-male Supreme Court, was in the audience. This monumental case, which Notorious RBG won 8-1, held that the U.S. military must provide the same benefits to all service members’ families, regardless of the member’s sex. As we stood outside on the MFA’s terrace watching Sharron Frontiero leave, my friend whispered after her, “Bye! Thank you for changing the world for women!”

“RBG” opened in theaters on an iconic day in pop culture history, May 4. Make sure to stay for the entire closing credits to see who won the “Martin Ginsburg Award for Supportive Husbanding.” (In the digital age, there’s also a notation for “meme creators.”) You’ll leave inspired and ready to take on the world. May the Ruth be with you!