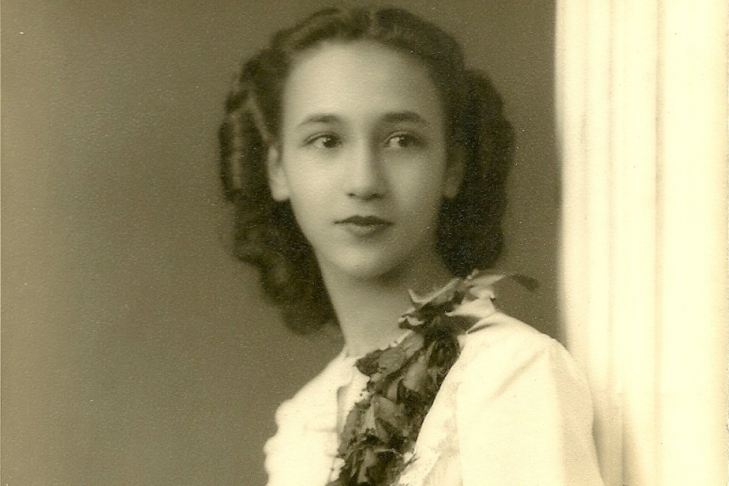 Ruth Bader Ginsburg, Brooklyn-born daughter of Russian-Jewish immigrants and justice of the Supreme Court, turns 85 on March 15. Notorious RBG has held many roles during her illustrious career: law professor, lawyer for the ACLU, women’s rights activist and, perhaps most unexpectedly, dedicated gym rat.

Justice Ginsburg famously began a rigorous workout regime after being diagnosed with cancer decades ago, and continues her ferocious workouts to this day. In October 2017, Justice Ginsburg’s personal trainer, Bryant Johnson, published a whimsically illustrated how-to guide called “The RBG Workout: How She Stays Strong…and You Can Too!” Recently, I discovered my grandmother Diane not only knew about the exercise book, she owned it and had been using it in her own physical therapy! I talked with Diane about living legend Justice Ginsburg, the importance of working out in your 80s and milestones she’s proud of achieving in her own life.

You’ve had a fascinating life. Like Ruth Bader Ginsburg, you were raised in New York in a Russian-Jewish immigrant family. Tell us about your origin story.

My strong grandparents and one remarkable great-grandmother came over from Russia before the turn of the century. My hard-working parents were born in New York City in the early 1900s, and I arrived in 1931 in the Bronx just in time for the Depression. I started working after school when I was 12, for 37.5 cents an hour, at a department store in Manhattan. Those years of struggle, and the World War II years that followed, shaped my thinking to this day. My college education at The City College of New York (CCNY) was totally free; it changed the trajectory of my life and gave me the opportunity to move forward after my kids were grown.

Since mothers had to work during the 1930s, being a stay-at-home mom in the ‘50s seemed the right thing to do. And perhaps it was—my two sons and two daughters are astonishing people who have all done wonderful things in their lives; they are involved with education and libraries, scholarship and health. My in-law children and my seven grandchildren are equally amazing, as is my great-granddaughter. The family is my greatest source of pleasure and gives me a major sense of achievement.

When my children were older, I went to library school and then worked as a librarian at the Post Campus of Long Island University for 38 years, becoming a faculty member and professor and teaching as an adjunct in the library school there and at Queens College for 10 years. Ruth Bader Ginsburg has described some of the situations that she faced, which are similar to what I faced in the workplace. I admit to being overawed by her strength of purpose and her ability to move women’s and other civil rights causes ahead all through her life. She’s up there with Eleanor Roosevelt in my book.

How did you learn about Ruth Bader Ginsburg’s workout and this book to begin with?

Aunt Sue, who is a physical therapist, bought me the book a few months ago. It was hilarious, and I was just starting my physical therapy. I showed it to the therapist and she thought it was wonderful. That’s how I learned about it. 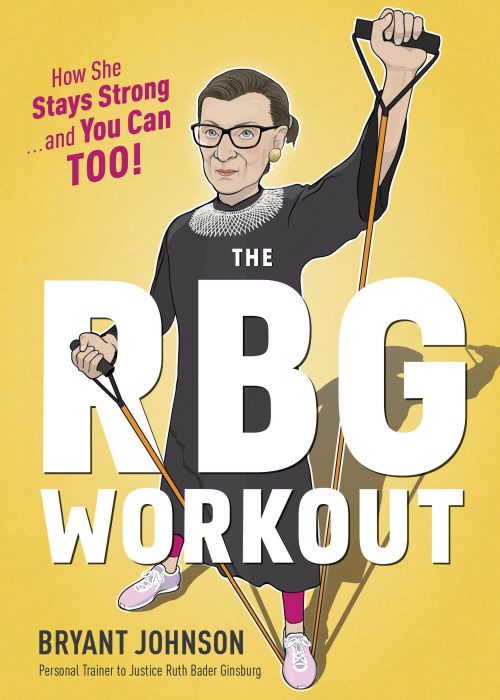 Justice Ginsburg said in the book’s foreword that the hour-long routine her trainer developed for her suits her “to a T.” Apparently, he’s been honing this workout for the past 18 years! Do you like the workout? Is it hard? Easy? Just right? Have you been doing it regularly?

I have not been doing it regularly, just because I have exercises I’m supposed to do that are designed for me. It’s taken them 18 years to perfect this for Justice Ginsburg, and I’ve only been working out four months! So, when I first got it and started it, I probably overdid some of the things, especially with this [resistance band]. The exercises from the book I have been doing, like the “fire hydrant,” have gotten easier. But I can’t exercise on the floor because I can’t get up! When I’m stronger, I can move into more of RBG’s workouts. Slow and steady; that’s the advantage of a personal trainer—find what works for you and your body!

Bryant Johnson, her trainer and the book’s author, said the twice-weekly workout is “excellent for older people who want to maintain a full life.” How does exercise and wellness fit into your life now?

I was never an athlete or exerciser; I never played golf or tennis or tiddlywinks! But after I got sick last summer, and I was an absolute mess, I needed to do something. I’ve come a long way in the last few months. I can do quite a lot more now, and it’s wonderful. And I see that if I don’t do it, I’ll be back where I was, and I don’t want that to happen.

Justice Ginsburg listens to PBS NewsHour during her workouts. What do you listen to?

Johnson writes of Justice Ginsburg: “Her determination has been inspiring, and she is a living example of what she stands for, including the fight for equal rights for women.” Which women have inspired you in your life?

The first was Amelia Earhart. I was a little girl, and she was flying off into the wild blue yonder, until she flew off and disappeared off the face of the earth. The greatest influence I think I had was Eleanor Roosevelt. She was great; she was marvelous, an incredible person. On the other hand, I also think some of the people in our own family were also strong and had difficult lives. My great-grandmother, Bubba Chaitin, was 13 in Russia when her sister died in childbirth. In a tradition known as “sororate marriage,” the next-youngest sister became the new wife and the baby was kept in the family. Since most marriages were arranged anyway, the family was very involved in making sure they were good marriages. She raised that baby as her own, and had nine children with her husband. The last baby was born in this country. Some older children came over to America first, and later she came with the younger ones. And I believe she was pregnant at the time, and recently widowed.

The Russians tried to find those escaping Jews, stabbing pitchforks into the hay wagon they were hiding in. But the family made it! Bubba Chaitin didn’t speak English, and I didn’t speak Yiddish, but I did understand when she said I had a shayna punim [pretty face]. I was an only child because of the Depression; she told my mother that “one child does not make a family.” She was well encompassed in her family. I think she was a very brave and strong woman.

What has your experience been like in the fight for equal rights for women?

I never fought in the streets or burned my bra. I found people like Gloria Steinem a little too strident for me—just not my way of doing things. But when I worked at Long Island University, I was involved with the faculty union and I reworked the union contract and other documents to de-genderize the contract. All those “he’s” and “him”—ridiculous!

I also had a running battle over the years with the City College Alumni Association because the title of its magazine, “Alumnus,” was no longer appropriate. CCNY had begun as a men’s college, although they did allow women into the schools of education and engineering. I was annoyed when they had the alumni association dinner and gave out medals and awards and almost all the recipients were men. That really bothered me—no worthy women graduates? And the other thing that bothered me about the magazine was the notices section, which only mentioned people who were working with new positions and promotions. They said there was no room to include marriages or births, as in other similar magazines I had seen, and as a result many acquaintances were lost as girls got married and changed their names. I wrote to the magazine about that many times. It was just too annoying—how were we supposed to know what happened to our classmates? And wasn’t raising families important enough?

On the 50th anniversary of graduating from City College, they asked if we wanted to write anything about our time there. So I did. Everyone was writing about how wonderful their experience was, and it is true—a free education was just incredible. But I wrote a snarky, not-very-nice letter on my ongoing disagreement with the alumni association and its treatment of women. But they printed it! And someone I knew from college found me because of that letter, and we regenerated our friendship. 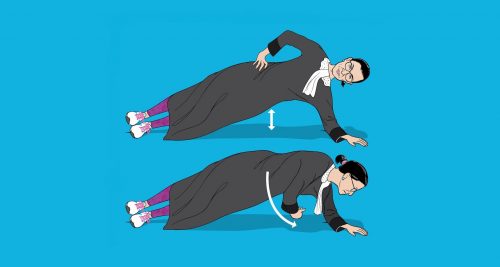 During her workouts Justice Ginsburg is known to sport a crewneck sweatshirt that says, “Super Diva.” Do you have a personal mantra?

[Laughs.] I like to say, “Oy vey!” in the midst of my most difficult exercises.

The book reveals that RBG is a fan of chocolate. What’s your favorite treat?

Chinese food! And, unfortunately, it’s more of a treat now than an ordinary takeout dinner. Really sad. Chocolate is not high on my list. General Tso’s chicken? YES!

Justice Ginsburg and Justice Antonin Scalia were close friends; she said at one point, “He makes me laugh.” Who makes you laugh? How important are friendships in your life?

If I see something on Facebook or YouTube with these laughing babies, I just fall apart. So spontaneous! That’s the best kind. I like Key & Peele a lot. If I look at an old Sid Caesar routine, or Carol Burnett, those things are wonderful! Seeing them for the 48th time still delights me.

I have friends I’ve kept in touch with over all these years. My cousin Barbara—we were born exactly four weeks apart. There’s Beverly—I was 5 and she was 6 when we met. I’ve got Janet from CCNY now in California, Lillian from the projects, and several people from work, especially Mary, with whom I traveled a lot in younger days. Now we keep in touch on the phone, and we talk about grandchildren and cardiologists. We are well into our 80s, and yet we are all hanging in there.

My mother was beautiful; everything she wore matched perfectly. When she went to work, she took the New York subway and wore white gloves with a matching purse and shoes! When she came to live with me, I would shop for her and bring clothes back to her. Half the time she didn’t like what I’d show her and would say, “What good is it if it doesn’t make an outfit?!” And to me, that kind of sums it all up. What good is something if it doesn’t pull together and make a bigger statement? If you extend that a bit more philosophically, does something new fit in with the rest of your life? It’s not deep or profound, but it works!