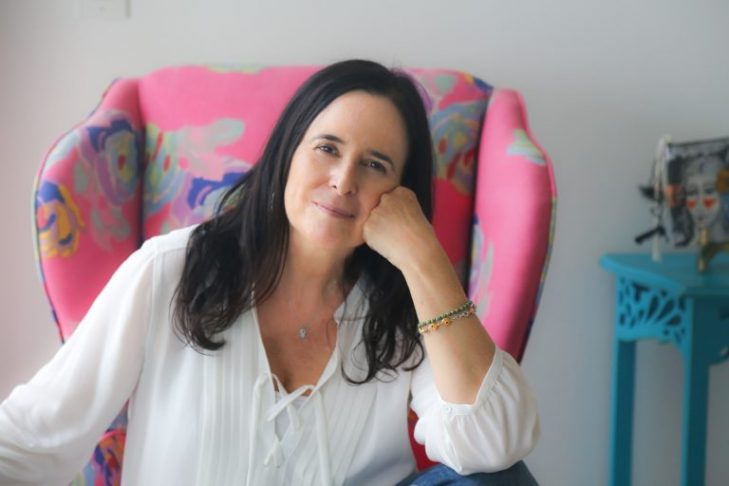 A few years ago, Ruth Behar’s mother presented her with the school uniform she wore in Cuba to the Central Israelita School. Behar, a writer, artist and cultural anthropologist, was born in Havana and came to the United States in 1960 at the age of 5. She is a Cuban Jew of Ashkenazi and Sephardic heritages. And she is a Cuban American whose work has centered on her diaspora stories.

I have been engaged with Behar’s work for a couple of decades. She is a kindred spirit, in that I am also Ashkenazi and Sephardic. My mother is a Cuban Jew whose father hailed from Turkey and landed in Cuba in part because of America’s restrictive quotas in the 1920s. That turned out to be serendipitous for Ladino speakers like my grandparents. It was an easy leap to learn modern Spanish rather than start over in English.

“I straddle both worlds,” Behar told JewishBoston. “I’ve lived the conflict between the two cultures. Sephardic Jews lived among Muslims and Ashkenazi Jews lived among Christians. The two communities have very different practices. I’m fortunate to know both traditions. I marvel at Yiddish culture, which I love. And Sephardic culture amazes me. I love thinking about Ladino. I’ve been looking into the language more and want to write something in it. Both Yiddish and Ladino have allowed me to tell my story.”

The first Latina to receive a MacArthur Fellowship, Behar will be at the Hadassah-Brandeis Institute on Wednesday, April 10, appearing on behalf of the HBI Project on Latin American Jewish & Gender Studies. Behar said her talk, “Words and Artifacts: Treasures from a Cuban Jewish Exile,” is a tactile presentation. “I will bring artifacts I’ve gathered in the course of my [anthropological] research,” she said. “I like to have something to hold and touch, something to pass around, especially in light of the internet and cyber-reality with which we live.”

Behar’s latest volume of poetry, “Everything I Kept: Todo Lo Que Guardé,” embodies her ongoing desire to present the duality of her history. Behar said the book, a bilingual edition with a given poem on the left in Spanish and the English translation on the right, enables her to tell her entire story. “If you are bilingual, it has a special resonance,” she said. “A lot of the poems are themes of exile and being between places. The search for home, the loss of home. One poem in the book called ‘Miedos,’ or ‘Fears,’ encapsulates some of those themes.”

The poem reads, in part: “Police, soldiers and immigration officers terrify me. If you took/my fears away, I would be weightless and free. You would see/me dance like a dry brown leaf and then I’d blow away in the/autumn wind.”

In her book of essays, “The Vulnerable Observer: Anthropology That Breaks Your Heart,” Behar writes that her fears were further realized in suppressing and then reliving a harrowing car accident that left 10-year-old Ruth in a body cast for over a year. Her recollection of that year and its consequences are beautifully and painfully rendered in an essay called “The Girl in the Cast.” As an adult, Behar realizes she repressed her fears of living her life outside of the confines of her small bedroom. “The body is a homeland,” she wrote, “a place where knowledge, memory and pain is stored by the child.” In Behar’s case, the physical immobility she experienced surfaced 25 years later as a debilitating panic attack in an aerobics class.

She confronted her ongoing pain in a young adult novel she published last year called “Lucky Broken Girl.” The book was honored with a prize from the American Library Association for best Latina/o literature. “It’s based on my life growing up as a Cuban Jewish girl in New York,” noted Behar. “This time I tell the story from a 10-year-old girl’s perspective. It was an exciting thing to do creatively—to enter the body of a 10-year-old who is in bed for a year. She undergoes the humiliation of depending on her mother for her basic bodily needs. Kids have really responded to the book. How do you deal with such adversity? How do you find hope and consolation when going through that experience?” Like her protagonist, Ruthi, who eventually walked again, Behar began to make art of her trauma and healed from the inside out.

At the University of Michigan, Behar’s courses are hybrids. While she teaches cultural anthropology, her course on “Cuba and Its Diaspora” explores the concept of home. The course attracts creative writers as well as anthropologists. “The diversity of students has grown so the classroom becomes an interesting space where people come together from different cultures,” she said.

The same may be said of the Cuban Jews living in a diaspora within a diaspora. “Cubans aren’t ready to let Cuba go,” Behar said. “To let Cuba go is to let go of the dreams Cuba represents.” She posited that the Jewish diaspora has inspired its Cuban counterpart. Consequently, Cuban Jews have two homelands where they pursue distinct dreams in both places. “Next year in Havana, and the year after that in Jerusalem,” was a common refrain at my childhood Passover seders. Behar’s work beautifully encapsulates the Cuban Jewish conundrum of shuffling between two distinct homelands.

Register for Ruth Behar’s presentation at the Hadassah-Brandeis Institute here.