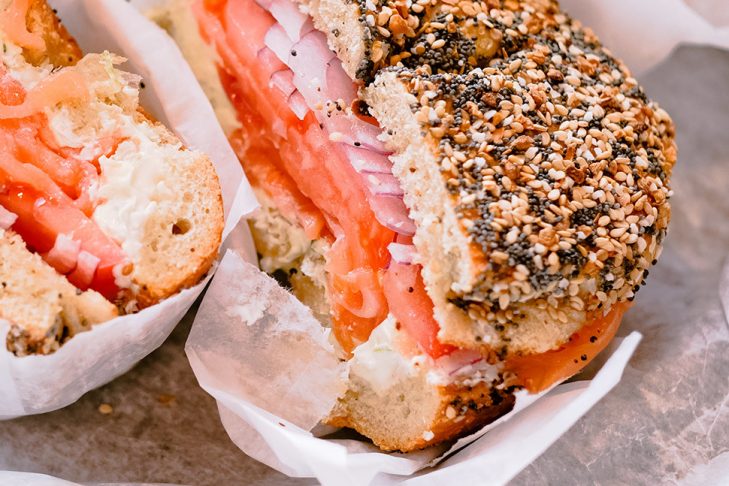 A colleague recently introduced me to a term I probably should have heard before. After all, I spent my high school years active in NFTY, traveling to Israel during the summer and generally surrounded in a bubble of Jewish friends, Jewish activities and a fairly Jewish neighborhood.

“Ashkenormative” isn’t a dictionary word—yet—but it accurately describes the phenomenon of the perceived or assumed prioritizing of Eastern European (Ashkenazi) Jewish culture over all other forms of Jewish heritage and experience. You might be surprised to learn that Mizrahi Jews—or those from the Middle East and North Africa—have a majority share in Israel with just over 50 percent of the Jewish population. It’s puzzling then, if not outright wrong-headed, that the beige/brown foods of my ancestors continue to dominate public discourse around public food.

And I am part of that problem.

Last week, after another sleepless night in a cramped hotel room in Midtown Manhattan, I Googled “New York’s best bagel” and one name kept coming up. It was about three-quarters of a mile from my hotel, it was 5:40 a.m. and they opened at 6, so I grabbed my key card and wallet and headed out.

Bagels, as you probably know, originated from Jewish communities in Poland. Jews are so closely tied to their assumed bread product of choice that “bagel eater” or “bagel muncher,” if you prefer the Urban Dictionary, is often used as a smear (not schmear). On the other, non-prejudiced side, non-Jews are uncomfortable even asking Jews about bagels, afraid that they’ll sound just like the people who hate us. Which, at times, they do. Tough conversation, frankly. I don’t envy you.

Anyway, back to bagel-chasing in Manhattan.

Ess-a-Bagel at 6 a.m. is a mess of tables covered with catering orders, a confused line of locals and curious tourists snaking around a mass of stanchions, and one brave soul behind the counter, efficient and cold, knocking down orders at a rapid pace.

I ordered my go-to—an everything with scallion cream cheese, un-toasted (you monsters toast quality bagels?)—and sat at a sliver of available counter to eat it. It was…well, it was fine. A 600-calorie carb/dairy bomb sat heavily in my stomach until around 1 p.m.

And that’s when it dawned on me. Bagels, even the best in the world, are just OK. They’re rolls with dried spices or seeds. Some ghastly versions include fruit, even cheese or jalapeños.

I was in New York, a city crammed with Jews and Israelis and the best I could do was wait in line for a bagel?

Done poorly, they’re spongy, flavorless discs on a Trader Joe’s shelf; or perhaps an overly crusty, burned and overly seeded tooth-breaker (Iggy’s, which does fantastic bread and awful bagels). But how, I wondered, can the peak of Jewish food be a crusty roll with some variety of cream cheese—Ess-a-Bagel even has what must be a gag-worthy “Oreo” schmear—be the best-known, best-loved Jewish food? Disagree? Fine, but find a bread product that generates more online debates, top 10 lists, maps, ethnic jokes and, yes, 80-minute long lines of Midwesterners at Ess-a-Bagel by 7 a.m.? For a round piece of crusty white bread?

Three days later, back in Boston, I met a friend for lunch at Café Landwer. It was just after 12:30, peak lunch hour, and the café was half full. Landwer is a Tel Aviv-based chain, and Boston’s location is its second outside of Israel (after Toronto, which loses at hockey but wins at getting Israeli cafes first). 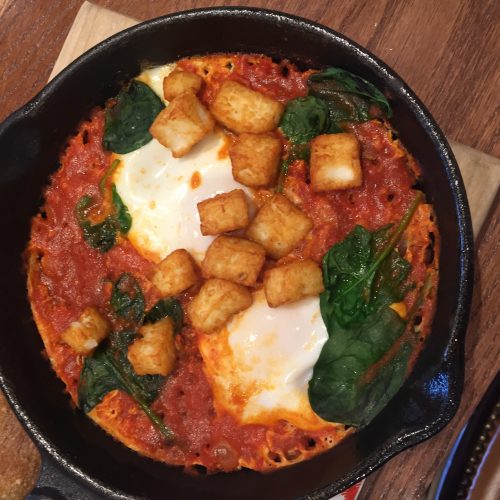 Israeli food is having a moment, and it’s about time. Shakshuka, a peppery, tomato-rich egg dish spiced with all sorts of Middle Eastern magic, is leading the charge.

With fluffy pita, homemade Israeli/Lebanese/Palestinian hummus (they’re all amazing; I can’t choose a side here), eggplant dishes, Aroma Café iced coffee, sabich, magical cauliflower, Yemenite fish stews and endless breakfast buffets, Israel is, for me, culinary heaven made of a blend of cultures and flavors spanning the globe.

And nary a bagel in sight. Well, that’s not entirely true. The brilliantly named Holy Bagel in Jerusalem has bagels, but with the availability of fresh semit (Arabic bread rings covered in sesame seeds), I must ask why? Just why?

Late last year, I had a once-in-a-lifetime chance to eat a dish created by a three-time “Chopped” champion and two-time judge. (I’m not boasting, I’m sharing. Share-boasting.)

Einat Admony, a New York restauranteur who used to be a cook in the IDF, was the guest at an israel360 event. With the help of a caterer, her recipes fed 75 or so young adults a healthy serving of her hummus, pita and a dish she called “Casablanca Catch.” While the guests ate from large portions of caterer-made versions, Einat used a single pan and created a demo version for the group to watch. Then she made a plate for me. It was sublime.

She whispered to me, so as to not offend the waiters and kitchen assistants nearby, “The caterer is making the bland version. This is the real thing.” 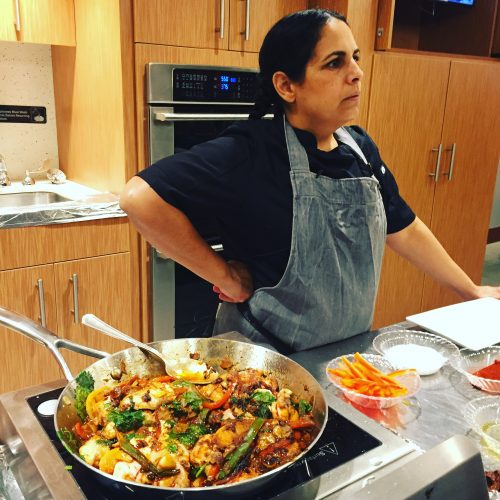 Einat Admony cooked dinner for me. That actually happened. It was not bland. (Photo: Dan Seligson)

One bite and I knew what she was getting at. Loaded with garlic, harissa, preserved lemons, chilis, chickpeas and red snapper, it was probably the most incredible thing I have ever eaten. She then said, “Here, there’s bread with it,” and handed me one of the four pitas she made during the demo with the dough I had seen her kneading hours earlier.

From that day forward, I was obsessed. Israeli food nudged me toward a larger world, and Einat plunged me into food bliss. I spent weekends trying to perfect my own “Tel Aviv” hummus and spicy zhug, fruitlessly struggling to replicate the mind-bending plate of hummus I had at Hummus Mashawsha. My wife roasts and re-roasts cauliflower, trying to find whatever magic Eyal Shani infuses into his world-beating vegetarian dish. 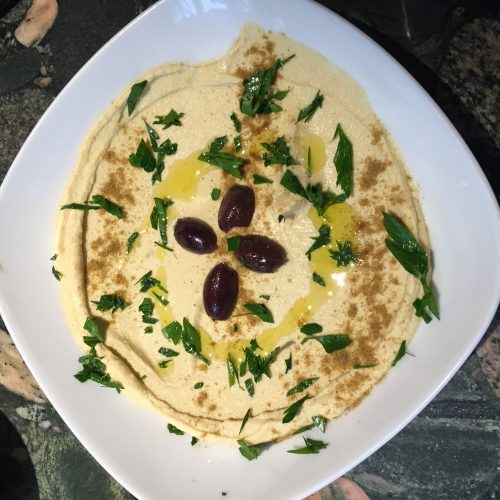 To be honest, I am a bagel eater and always will be. It’s not so easy to pick up a dozen shakshukas in a paper bag and bring them to a friend’s house on a Sunday morning. Bagels are a convenient food and better than pieces of white bread. They hold ingredients well, and just one bagel with salmon and capers should give you all the sodium your body craves for a week or more. So, credit to my hard-baking Polish great-great-great-grandmothers and fathers on their bagels.

At the same time, I have come to the realization that no matter how much I treasure this heritage, I must be honest about the beige-ness and blandness (as seen in this photo) that is in my culinary DNA. Mediterranean food looks better, tastes better and is scientifically proven to extend your life and make you happier. Even the best bagel on the planet can’t do that.