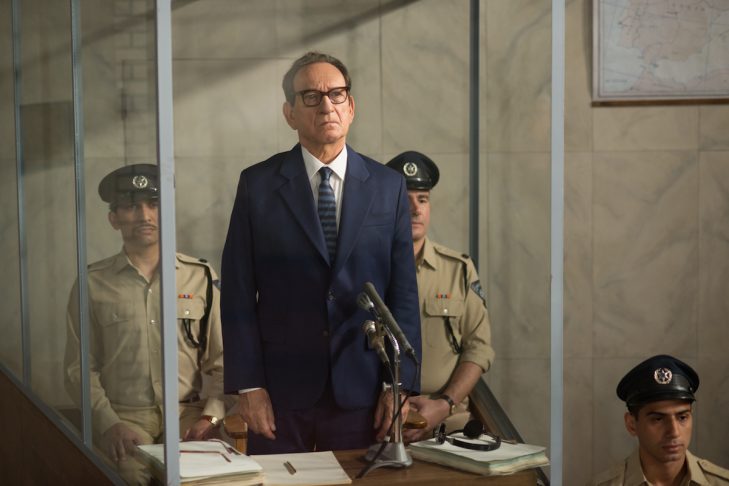 The Mossad is having quite the pop-culture moment. The legendary Israeli national intelligence agency is the subject of a popular parody Twitter account, while Sacha Baron Cohen gleefully pretends to be an ex-Mossad “agent” on Showtime’s weekly cringe-fest “Who Is America?” Meanwhile, Israel’s enemies are so convinced of the Mossad’s powerful and cutting-edge spy craft that rumors have persisted for years that highly trained Zionist animal operatives are undermining other Middle Eastern governments at the Mossad’s behest. Why this obsession? Because the Mossad is the best at what they do, and what they do is mind-boggling.

Just this year alone, there have been multiple film adaptions of several implausible yet completely real clandestine Mossad operations. The first of these films was the lackluster “7 Days in Entebbe” (a movie that somehow made Operation Thunderbolt boring), while the upcoming “The Red Sea Diving Resort” will focus on the secret Mossad operation to rescue Ethiopian Jews in 1981 through a decoy resort on the Red Sea. Last week, the JewishBoston team and a few guests attended an advance screening of “Operation Finale,” which dives into the Mossad’s extraordinary extraction of Nazi war criminal Adolph Eichmann from Argentina to Israel for trial in 1960.

The story covered in “Operation Finale” seems stranger than fiction, but it really happened. The Mossad, tipped off that Eichmann is living comfortably under a fake name with his wife and children in Buenos Aires, sends a crack team of operatives to verify his identity. The agents successfully identify him via his ear shape, the flowers he bought for his wedding anniversary and the fact that his idiot children publicly used “Eichmann” as their last name. Once the Israelis are confident the man is indeed Eichmann, they abduct him after his shift at a Mercedes-Benz factory, move him to a safe house and finally smuggle him out of Argentina, drugged up and passed off as a tipsy El Al pilot to escape the scrutiny of Nazi-sympathizing Argentinian police.

The operation is considered one of the greatest triumphs of Israel’s intelligence community, and the film does a good job of highlighting how hair-raising the stakes actually were for the Israeli team—so much so that even though we all KNOW how the story ends—historical spoiler alert: they get Eichmann to Israel to stand trial—I found myself still biting my nails. As my colleague Kali put it, “Even though I already knew Israel succeeded in its mission, I was still holding my breath a few times during suspenseful scenes.” The success of the operation seems even more like a miracle when we witness the slow, old-school espionage methods the team had to use—lurking in fields outside Eichmann’s house to document his every move with an ancient camera, hiding rolls of film in a creamer pitcher at a café and handing off forged documents to each other by sandwiching them between the pages of a newspaper. 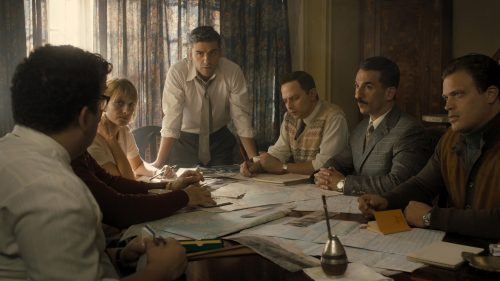 “Operation Finale” boasts a truly remarkable cast, led by Ben Kingsley as a creepily faux-innocuous Eichmann, and one of my favorite actors, Oscar Isaac as Peter Malkin, a Mossad agent looking to finally get Eichmann after a previous failed assassination attempt. Peter, like the rest of the Israelis, experienced incalculable loss during the Holocaust, which ended a mere 15 years prior to the events depicted in the film. The fact that Eichmann made it to Israel alive is a testament to the professionalism and values of the Israeli team, and the film does show the complex emotional pulls the agents experienced during the operation. My colleague Marie said she “appreciated the time and space allowed for each of the detailed personal encounters, the expressions, gestures and settings.”

Isaac is always an incredibly charismatic lead in everything he’s ever been in, and he is particularly riveting in his one-on-one scenes with Kingsley as Peter tries to convince Eichmann to voluntarily commit to going to Israel for trial and Eichmann employs a variety of psychological mind games on his captor. At one point Eichmann makes a joke, and one of the Israelis bursts out laughing before he turns pale and leaves the room, clearly deeply disturbed. Eichmann continues his ploy of being sympathetic in captivity, constantly asking after his family and adamantly declaring himself to be just a scapegoat who tried to save Jews, not kill them. Of course, the real Eichmann was a master manipulator, and with Kingsley’s portrayal, the audience can see why this persona was so terrifyingly effective.

Director Chris Weitz makes the smart call of not burdening the actors with thick faux-Israeli or faux-German accents, which helps the audience fully connect with the characters as individuals. The supporting cast is also stellar: The Mossad team is led by Lior Raz, who you may recognize from playing another hard-boiled Israeli operative in Netflix’s “Fauda.” Raz fits the part completely, and looks like he exudes clouds of stale cigarette smoke and chutzpah from his pores. Comedian Nick Kroll is so delightful in this film that sometimes I forgot this was the same outrageous guy from “Big Mouth” and “Kroll Show.” Mélanie Laurent, of “Inglourious Basterds” fame, continues her laudable streak of playing righteous Jewish avengers.

Eichmann’s Nazi-fanboy teenage son, Klaus, is played by Joe Alwyn (Taylor Swift’s current boyfriend). He is very effective in this role, veering from cute to evil in a snap, especially in one early scene where he takes his (secretly Jewish) girlfriend to a casual Argentinian Nazi rally. Seeing a room full of seemingly ordinary, normal folks screaming, “Jews into soap! Jews into soap!” while doing the “Heil Hitler” salute highlights the nonchalant Nazism of Buenos Aires at the time—and made me think about the current rise and normalization of anti-Semitism and Holocaust denial here in America and around the world.

Interestingly enough, Kingsley is set to also appear in the above-mentioned “The Red Sea Diving Resort.” With this new penchant for Mossad movies, I wonder when Hollywood eventually makes a movie of the recent operation to smuggle Iranian nuclear archives to Israel, Kingsley would be interested in playing Mahmoud Ahmadinejad? Because I, for one, would watch the hell out of that.