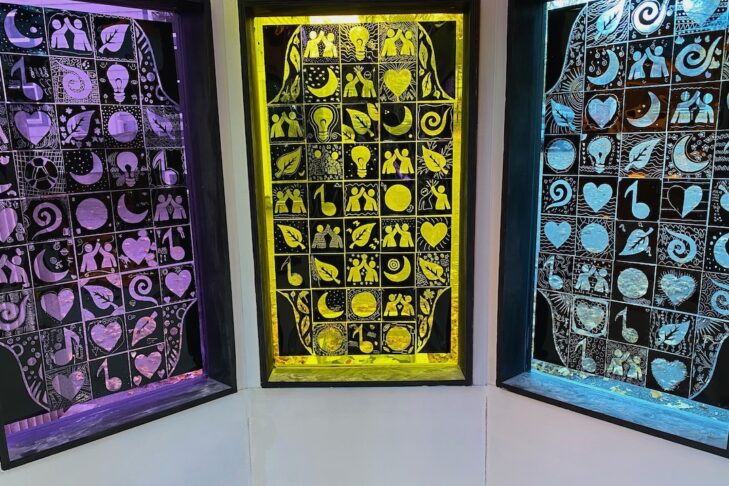 Many cultures have a version of a lantern. In Judaism, it is a ner tamid, the eternal light hanging above the bima, or synagogue platform. In America’s origin story, Paul Revere placed a lantern in the Old North Church—“one if by land and two if by sea”—as a signal, a warning of a British invasion.

This year, working with Jewish Arts Collaborative, artists Tova Speter and Emily Bhargava have added another layer of meaning, creating a gazebo-shaped lantern to celebrate Hanukkah with “Brighter Revealed: A Traveling Public Art Installation.” Noted Speter: “The lantern is Hanukkah-inspired, and our intention was to add the light and color of Hanukkah. But it’s also universal, so any added lighting and color throughout the dark winter is welcomed.”

Over the years, Speter has collaborated with JArts on Hanukkah celebrations featuring public art. Before the pandemic, she created art projects for Hanukkah celebrations that took place at the Museum of Fine Arts. Last year, she and other artists displayed their works of light in eight window sites around Boston. Among them was an eight-stanza poem incorporating the theme of light and projected on the side of the MFA. The 2020 arts extravaganza was called “Brighter Connected” and was part of the “Brighter” series of installations commissioned by JArts.

Speter comes to her role as a public artist with an advanced degree in art therapy. But what drew her to creating public art was an experience painting a mural in an elementary school soon after she graduated from Brandeis University. One day as she was painting, a teacher put a misbehaving kindergartner in Speter’s charge. She sought to engage the little boy and asked him to paint a small green rectangle. “It was a transformative experience for that boy,” Speter recalled. “With just two minutes of painting time with me, he was so proud in front of the other kids, and they looked at him differently, too. That was the first and last mural I painted by myself, and since then, which was over 20 years ago, I’ve only done collaborative public art.”

Based in Somerville, Bhargava participates in many collaborative community art projects. While she doesn’t work in the Jewish community as much as Speter does, she is active in a creative reuse center in Somerville. “I’m very interested in making materials available to people for exploratory learning and generally offering people more opportunities to be creative,” she said. Bhargava is also a mosaic and stained-glass artist. “Light is such a primary component in my stained-glass work,” she said. In her work in public health, she operates at the intersection of art and health. “All of my projects have a health promotion component,” she added. “Sometimes in a project like ‘Brighter Revealed,’ the goal is community-building, which has a health impact.”

“Brighter Revealed” also pays tribute to the Jewish value of ometz lev (courage of the heart). The concept connects to the Hanukkah story’s miracle of having just enough oil available to light one candle yet lasting eight days, as well as the Maccabees’ great military victory. The project also evokes the Maccabees’ inner strength—a strength that allowed them to triumph over seemingly insurmountable odds.

Laura Mandel, executive director of JArts, pointed out that “Brighter Revealed” is intentionally mobile. “We thought that by making this year’s public art project for Hanukkah transportable, and by making it this one massive lantern that physically represents the involvement of 300 individuals from almost 20 groups, we’re very intentionally sharing the light of Hanukkah,” she said. To that end, “Brighter Revealed” will be on display at the Sunday, Dec. 5, groundbreaking for the new and extended Hebrew College campus on the grounds of Temple Reyim and Mayyim Hayyim Living Waters Community Mikveh in West Newton.

On a crisp November morning, Speter and Bhargava presented the giant lantern built by Newton North High School senior and woodworker Manny Hutter. The eight-sided lantern, mainly constructed of wood, was nearly finished and standing on a platform in the parking lot of Speter’s art studio in Needham. In the days leading up to Hanukkah, the lantern, which comfortably fits three people inside, will display Hanukkah-themed scratch art from over 300 people in 20 venues. Decorating the lantern has been a multigenerational project with art workshops taking place at Hebrew SeniorLife, 2Life Communities and eight day schools in the Boston area.

The objective is for light to stream into the lantern through squares of black scratched art paper mounted on its glass windows. Bhargava explained that participants were asked to identify a word that described the source of their strength. People were then given a choice of eight stencil designs representing eight sources of strength and asked to choose a design to which they would add their own details.

“Creating artwork is complex, symbolic and metaphorical,” said Bhargava. “There is so much richness in each of us and people can only see a portion of that. We have to choose to reveal more or less of ourselves to the world. The process we took people through during the workshops helped them explore, articulate and then reveal what brings them strength.”

In addition to creating art, a compilation of recorded voices sharing what inspires inner strength will be played in the lantern. The recordings include the voices of workshop participants. But anyone can add their voices to the project until Friday, Nov. 19, here. “As people enter the lantern,” Speter said, “they will see color streaming through the scratch art pieces in the windows, and they’ll hear the words. They’ll be surrounded by auditory and visual examples.”

For Mandel, presenting this “larger-than-life beacon that brings light is about the miracle of Hanukkah and the courage of the heart. That theme is so central to Hanukkah and all of us.” She added that in 2021 the goal is “to make the light of Hanukkah accessible for us all to celebrate as a community.”

The “Brighter Revealed” lantern will be on the road from Sunday, Nov. 28, until Monday, Dec. 6. Click here for a full list of stops.