Close
Never miss a great event again!
Get the best Jewish events delivered to your inbox every Thursday with JewishBoston This Week.
By signing up, you agree to our Terms of Use and Privacy Policy.
Hanukkah Recipes
View all 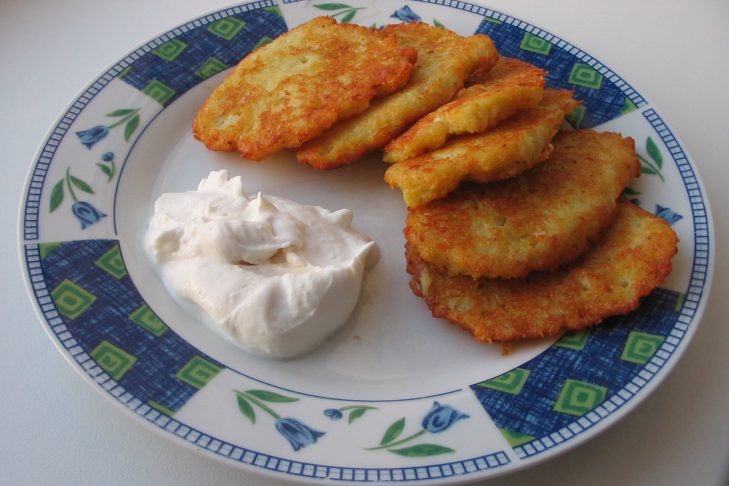 This is a recipe for quick latkes, nothing fancy, not like some of the recipes where you have to scrape a vanilla bean and crush cardamom pods. You could use a mix, but with this recipe, you can control the amount of salt. Here’s my low-stress, low-mess, no-peel, no-chop, no-tears, no-grate, yes-great latkes.

Let the batter sit while you heat the largest frying pan you have to medium high. Use enough oil to coat the bottom of the pan. You’re not going to be deep-frying or anything close to it. Use a large serving spoon or ladle to create small- to medium-size latkes. Because these latkes don’t have the potato strands to hold them together, they need to be moderate size so that you can flip them. Flip when brown on the bottom.

These latkes can be a substitute for the traditional labor-intensive latkes or they can be a supplement. I do grate potatoes and chop onions for latkes, usually at the beginning and end of Hanukkah, but in between those productions, I use this recipe for a quick hit.

I used this recipe on Thanksgivukkah, when the first day of Hanukkah 5774 came on Thanksgiving 2013. At noontime, I paused from preparing turkey and the fixings, which I had begun in the morning, to make a quick batch of latkes for lunch. (I used a parve version with non-dairy sour cream.) And I’ve used this recipe to make latkes for my younger daughter on schooldays during Hanukkah before she ran out the door.