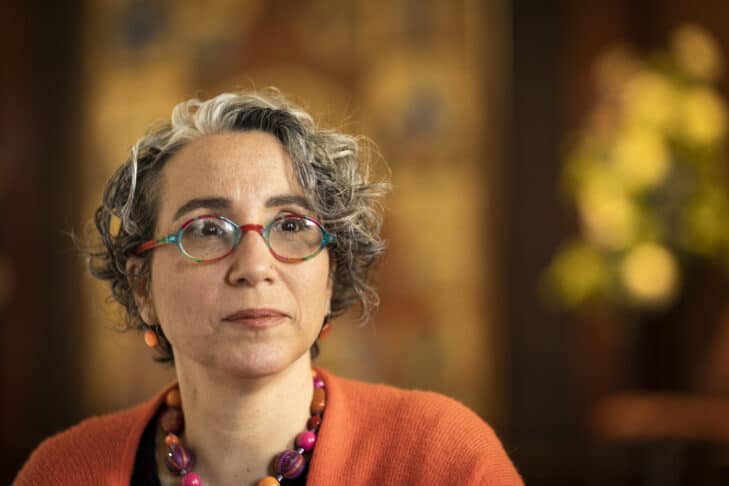 In casting about for a word to capture the merging of her Jewish and Latinx identities, the Chilean-born Rabbi Claudia Kreiman found the perfect portmanteau: Jewtina. The word comes courtesy of Analucía Lopezrevoredo, a Latinx Jew who coined it and founded an organization of the same name. It is a word that Rabbi Kreiman, or Rav Claudia as she is known, treasures. The senior rabbi of Temple Beth Zion in Brookline (TBZ), Kreiman recently spoke to JewishBoston about her Latinx identity, her family history in South America and creating a rabbinate in which Torah and social justice are intertwined.

Kreiman began our conversation by enthusiastically endorsing the concept of Jewtina. “All these years it’s been hard for me to figure out my Latina identity,” she said. “Even though I’m Chilean—I was born in Chile and then lived in Argentina—people don’t always see me as Latina. Latinos are usually regarded as people of color, and I consider myself white. It confuses people when they ask me to represent Jews of Color at an event.”

Kreiman is a second-generation South American on her mother’s side, whose grandparents immigrated from Poland during the Shoah. She is a fifth-generation South American on her father’s side. She proudly pointed out that at the turn of the century, her great-grandfather had fled the Russian pogroms and became an Argentinian Jewish gaucho. These Jewish gauchos settled in different agricultural colonies in the country’s Pampas and often built their synagogues alongside churches in town squares.

The family eventually settled in Buenos Aires, where Kreiman’s father, Angel Kreiman-Brill, was the first rabbi to be ordained by Rabbi Marshall T. Meyer, an American transplant, a disciple of Abraham Joshua Heschel and founder of the Seminario Rabínico Latinoamericano. After graduation in 1962, Kreiman-Brill was part of the new wave of South American-born rabbis who took over pulpits of their old-world counterparts—rabbis who regularly sermonized in Yiddish and German to congregants who didn’t understand either language. Kreiman-Brill and others also brought a more progressive Judaism to the South American Jewish landscape. As a result, Claudia Kreiman had a front-row seat to the liberal sea change happening in countries such as Chile, Argentina, Colombia and Brazil.

Kreiman, born in 1974, always wanted to be a rabbi. At age five, she dressed like a mini-me version of her father at a costume party, declaring her rabbinic intentions. As a child and young teen, she witnessed the flagrant human rights abuses under the Pinochet dictatorship in Chile. At significant risk to his family, her father took a strong stand against the Pinochet government, and Kreiman recalled banging pots and pans as a child in the streets to protest the oppressive regime. At the same time, Rabbi Meyer was at the vanguard of clergy denouncing Argentina’s Dirty War.

The Kreiman family moved to Buenos Aires when Rav Claudia was in high school. Her father had a new pulpit, and her mother, a social worker, was the director of the Argentinian Jewish community’s employment agency. Kreiman taught Hebrew school at the time; with no women role models as rabbis in her community, she decided to become a Jewish educator. But those plans abruptly ground to a halt when a group of Jewish agencies in Buenos Aires, collectively known as Asociación Mutual Israelita Argentina (AMIA), was destroyed by an Iranian suicide bomber. On July 18, 1994, Kreiman’s mother, Susy Wolynski Kreiman was at work at AMIA. A friend, who lived next door to the AMIA immediately called Kreiman with the news, The chaos and fear after the six-story building was destroyed has never completely left Kreiman. She recalled: “I will never forget the desperation of that moment. My father, sisters and I waited in a nearby Jewish school to await news of our mother.”

Kreiman and her family slept on the steps of an adjacent AMIA building for two nights, hoping to find her mother. In the agonizing week that ensued, the family searched for Susy Kreiman in hospitals. Her body was discovered on Sunday, six days after the bombing, and her family buried her the next day. “It was the most painful moment of my life. But through the pain, I also felt a sense of community and belonging. We were being held and loved. Friends fed me—they literally put food in my mouth—to nourish me.”

The AMIA bombing would anchor Kreiman’s future rabbinate in love, community and social justice. Soon after the tragedy, she earned her degree in Jewish education at the Seminario and made aliyah. “My mother’s death and the fact that she died in a terrorist attack strengthened my dedication to creating a different future in which we responded to hate with love,” she said. While living in Israel, Kreiman was a vocal advocate for Palestinian rights. It was the beginning of human rights work that would lead her to affiliate with the New Israel Fund, J Street’s Rabbinic Cabinet, and T’ruah: The Rabbinic Call to Human Rights.

During her time in Israel, Kreiman also met women rabbis living meaningful Jewish lives who were “deep in community around Jewish practice.” She too aspired to live a principled and joyous Jewish life. At the Schechter Institute for Jewish Studies in Jerusalem, she honored her mother’s work and received a master’s degree in Jewish thought. She went on to pay tribute to her father and acknowledging her five-year-old self when she became the first Chilean woman to receive rabbinic ordination. On Dec/ 10, 2002, Kreiman was ordained and recently celebrated 20 years in the rabbinate. It was also the 50th anniversary of her late father’s graduation from the Seminario.

After her ordination, Kreiman worked for the Masorti (Conservative Judaism) movement in Israel. She immigrated to the United States and joined TBZ’s clergy team in 2007. She became the temple’s senior rabbi in 2019. During her time in the pulpit, Kreiman has focused on garnering “the power of rabbinic leadership to bring change. I constantly ask myself ‘How do I use that power? How do I raise my voice when there is injustice?'”

As part of this commitment, Kreiman was one of the “tomato rabbis” who traveled down to Florida with T’ruah to support the Coalition of Immokalee Workers (CIW)—a worker-based human rights organization whose members work in Florida’s tomato fields. CIW has been internationally recognized for fighting human trafficking and workplace gender-based violence. The CIW also pioneered the Fair Food Program, which was bolstered by partnerships among farmworkers, Florida tomato growers and companies, including Subway, Whole Foods and Walmart.

“Going down to Florida with fellow rabbis to support the Immokalee workers was a unique experience in that everything was in Spanish,” Kreiman shared. “For the first time, I was not translating from English to Spanish in my head, and I was honored to translate for my colleagues. I saw the powerful efforts of the Immokalee workers to bring about change. It was very powerful that we, as clergy, could help bring forward this change to support the workers.” The trip inspired Kreiman to become more active in T’ruah. Last year, she was appointed to the organization’s board. She will also continue her work directly with the Immokalee and CIW in January 2023 on a return trip to Florida.

Over the years, Kreiman has been as a member of the Greater Boston Interfaith Organization, the Brookline Clergy Association and a board member of the Jewish Community Relations Council of Greater Boston. She is a past president of the Rabbinical Council of New England and in 2015 was a CJP Chai in the Hub honoree in recognition of her tireless advocacy on behalf of the Boston Jewish community.

Kreiman’s deep wellspring of energy and commitment to social justice causes is evident as her congregation gathers for joyful worship on Shabbat and holidays, a mark of her rabbinic leadership at TBZ. Her relationship with the Divine is integral to her identity as a Jew and rabbi. She observed that “God manifests God’s self in so many ways in the world—through nature, in relationship with others, in my constant relationship with the Divine presence. In my practice and rabbinic calling, I recognize and remind myself that God is everywhere. God is inside every human being, and God has created every person in the image of God.”