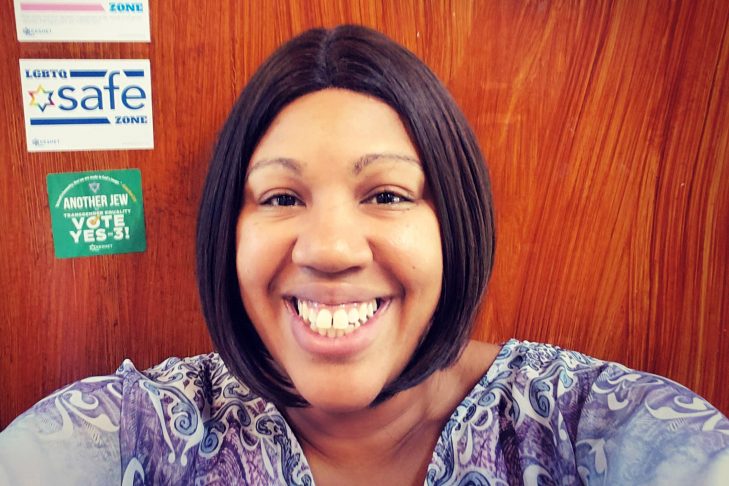 One of the first things Rav Tiferet Berenbaum wants you to know about her is that she is simply a Jew. Although she has served in Reconstructionist and Conservative synagogues as both a pulpit rabbi and director of education, she says the best practices of all the Jewish denominations inform her Judaism.

In August she joined Temple Beth Zion (TBZ) in Brookline as the director of congregational learning and programming. The Brookline native returned to the area to be closer to extended family. “I tried to leave Boston,” she joked. “I was motivated by Avraham and Le’ch L’cha—leaving your birthplace to discover the world.” A graduate of Beaver Country Day School and Tufts University, Berenbaum received her ordination from Hebrew College in 2013. After graduation, she served in congregations in Milwaukee and Southern New Jersey. “When I had my daughter, I realized how far away Milwaukee was from Boston,” she said.

Berenbaum spoke to JewishBoston last month about her Jewish journey and her new role at Temple Beth Zion.

You have said that Judaism chose you. Tell us more about that.

It did. I grew up in a Jewish milieu even though I went to a Catholic elementary school where there were no Jewish students. But it’s where I went to my first seder, and it’s where I was exposed to the Facing History and Ourselves curriculum. It’s also where I discovered text study. You could say they grow good rabbis there!

When I was 11, I had my first experience with God and started nourishing that relationship with prayer. Things blossomed from there. I began keeping the Sabbath on Saturday instead of Sunday. That was totally intuitive at first because I didn’t know any Jews at that point. It was an organic bat mitzvah. I began discovering mitzvot on my own, including lighting Shabbat candles. A woman was giving them out at Stop & Shop. I had no idea what she was talking about, but I followed her instructions.

My family is Southern Baptist, but they aren’t regular churchgoers. I had this need to go chronologically and find meaning in the liturgy and the story. I started with Genesis and wrote sermons as a kid. In college, I went to Harvard Hillel with my boyfriend at the time to say Kaddish for his dad. It was a real homecoming for me. I saw parallels to my natural worship. I told my mother that I thought I was Jewish, and she said she always knew it. I converted to Judaism my sophomore year of college.

How did you come to the rabbinate?

I had an insatiable desire for Jewish learning. My rabbis saw that and suggested rabbinical school. During conversion classes, one becomes accustomed to the routine of Jewish learning. After [immersing in] the mikveh, you build your own Jewish life. In college, I picked up a second major in Judaic studies. I wanted to do more Jewish learning, and rabbinical school was a natural segue. My calling has always been to figure out how to creatively give the tradition back to people and empower them to make it their own. I want people to celebrate what they do instead of feeling bad about what they don’t do. I’m thrilled to be at TBZ. It’s a place that welcomes people at all levels of their learning.

What do you hope to cultivate in your new role at TBZ?

I’m hearing there’s a need for more Hebrew language learning. There’s such richness in being able to connect with our texts in Hebrew. So many layers get lost in translation. Every translation is an interpretation.

I’m also excited about working on shifting to a values-based curriculum at the Hebrew school. Realistically, we have two hours a week of Hebrew school for our kids. At the end of the day, we want them to be good Jewish human beings. I’m finding ways to support that with text study and Hebrew language instruction. I’m also hoping to strengthen their Judaism beyond two hours a week of formal learning. Attending Shabbat services and family services is part of that. My goal is to strengthen the holistic nature of the program. That means making sure young people feel included and have ownership at TBZ.

What do you feel is critical to highlight for the Jewish community as a rabbi of color?

It’s important to recognize that Jews of color don’t always feel welcomed and safe in Jewish institutions. It’s easy to claim that we are an open congregation, or that we are a safe space. But those are words that need to be followed up with action. How are we a safe space for people of color? How are we working to be inclusive, and how does that play out in every aspect of a person’s experience? How does it make a Jew of color feel to have a police officer in front of a synagogue or a Jewish institution? Will they be welcomed, or subjected to extra questioning? How are people who don’t look Jewish or don’t look like they belong being treated? Are they singled out or profiled? There is an element of rachmanos—mercy—when considering these questions. It’s an opportunity for learning. There are so many resources now that are being written by people of color to share their experiences.

At TBZ we just started a racial justice group, where I’m hoping to take on these topics. The work, however, has to start with individuals. What is your particular contribution to making your space open, affirming and inclusive for all populations? That work is ongoing. All of this is a practice. It’s not about perfection but continuing to challenge ourselves and learn from our failures.

What is your Rosh Hashanah message for people reading this interview?

We all have gifts and superpowers that are uniquely ours. The question is, how do I serve and join? The beauty of Elul is that it’s a time of soul searching, soul cleansing and trying to move all of the unfinished spiritual business out of the way. When we get to Rosh Hashanah, there can be change and renewal. Yom Kippur is also a celebration. It’s not a sad day, but a solemn day, which is different. The etymology of the word “atonement” breaks down to “at one-ment”—returning to wholeness within the self.

Is there anything else you want to tell JewishBoston readers?

I believe in the good TBZ is putting out into the world. I want to support my rabbis and the congregants and help them discover what they need to learn to empower themselves. In my new role, there are times when I can sit as a congregant and talk about what is meaningful to me. I can shed tears in our racial and justice group over what it means to have my biracial child in this world. TBZ is such a meaningful place, and I’m blessed to be able to serve from there.