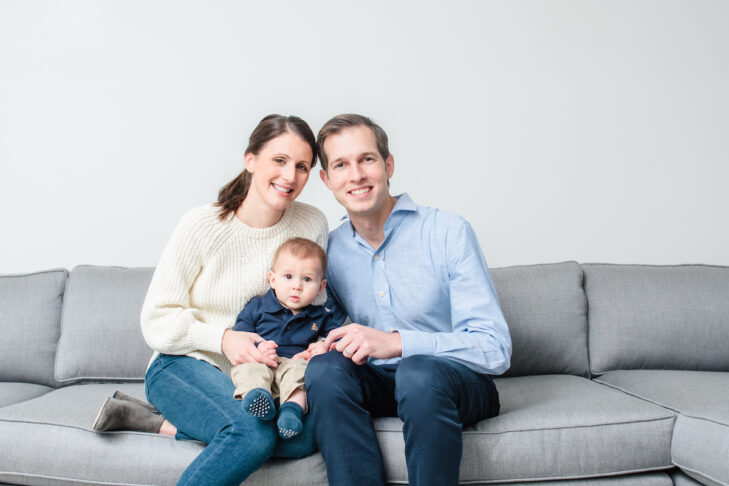 U.S. Rep. Jake Auchincloss and his wife, Bain & Company consultant Michelle, had their son, Teddy, in April 2020. It was the height of the pandemic, as well as the height of Auchincloss’s congressional campaign. The Marine vet, Newton City Council member and current congressman reflects on his toughest job yet: pandemic parent.

So, how did your pregnancy experience start?

Michelle, my wife, told me that she was pregnant in August 2019 and about a week later, I believe, Joe Kennedy made it clear he was going to be challenging Ed Markey for Senate. And so, within about a 10-day frame of time, Michelle and I learned that we were going to have a child and I made the decision with her to run for Congress. We had lot in the beginning.

I think parents will always tell you there’s no convenient time to have a kid, and in politics, it’s a mantra that timing is everything. And so I think both of us were just like, listen, you can’t time these things. It’s never going to be ideal. Life comes at you fast, and you just seize these moments. So we were kind of all in. My wife is just an incredibly supportive and patient person.

And then COVID-19 arrived in March.

My wife, being a gracious and patient person, allowed us to use the nursery as our campaign office, actually. So I had three campaign staffers in there, and we were running the campaign out of what was soon to become the nursery. And eventually, they got kicked out so that we could turn it into a nursery, and around that exact time, the pandemic hit. Teddy was born April 8—really, at the very peak of what I would think of as the uncertainty and intensity of that first surge. The hospitals were in complete COVID mode, and nobody was allowed in there except for me. We were masked up the whole time and really had to basically be in lockdown in the maternity ward. We were at Brigham and Women’s, and they were just wonderful.

What was that like for you both emotionally? Did you go in feeling nervous about getting COVID? I’ve talked to a lot of families who felt nervous being in the hospital.

I would say we were obviously concerned like everybody about the risk of getting COVID, but we didn’t let it dominate our thinking because there really wasn’t any other option. We weren’t going to do a home birth. We were going to make it work. And the Brigham’s staff and nurses and physicians were awesome. I would say in a paradoxical way, it made it maybe more intimate and more of a family memory, because usually when you have a child, everybody comes and visits.

I remember when my sister-in-law had her son, everybody came in: Friends, family, and it’s this whole train of folks, and for us, it was just us for those first few days. Not even my mom or her mom could come. So it was a very family-centric intimate moment, and then that really extended into our first month or two at home. There’s always a parade of well-wishers, and for us, there wasn’t. And to be honest, that was kind of nice, actually.

What did you think about during those quiet times? Because you were also professionally quite busy, I assume. What was the rhythm of your life?

It was one of the most emotionally intense periods of my life because we had a newborn … Which was a magical moment for us, and we were up, obviously, every two hours at night, so we were very much sleep-deprived, which always makes emotions more raw. And then, as you said, the campaign was really starting to ramp up. Late spring, early summer, that’s when press attention dialed up. That’s when the contours of the race were taking shape, and we had to deal with getting on the ballot and dealing with how you pivot a campaign to a pandemic.

So it was incredibly intense, but I would say that through it all, I kept on reminding myself that, actually, in a kind of intuitive way, I was very blessed that I was able to see my son so much in those early months of his life. Because during a normal campaign, I would have been out on the trail 18 hours a day, and because of the pandemic, I was in the house, so I was able to see him a lot while still campaigning. Looking back, it was a blessing for me despite the tragedy of the pandemic.

We talk a lot about working moms. Working dads sometimes don’t get the same focus. Can you walk me through what a day is like if you’re campaigning from home with a newborn? Give me a typical pattern of the day trying to campaign remotely with a brand-new baby.

I would say one feature is that day and night really start to have sharp contours to them because we were up three or four times a night to change and feed him. As any newborn parent knows, sometimes it’s hard to go back to sleep, so you maybe get some work done. And then it’s daytime again, but it’s sort of the same rhythm. Because for him, he’s just always in a cycle of sleeping and eating, so day and night start to blur together.

It’s a lot of what I think of as mini cycles, between working from home where I’m on a Zoom call with somebody or with a group, and then I’ve got seven or eight minutes between Zoom calls. I’ll run and go see him and play with him, and maybe try to feed him or help out and then go right back to a Zoom call. My wife and I would try to line up our calendars to be able to sync that together.

Tell me about your wife. How did you split duties?

She is a consultant for Bain, and she was on maternity leave from there, so she was home. I should be careful! I don’t know how much she wants me to talk about this, but my wife doesn’t actually like politics all that much, ironically. It was an intense primary, and so I think she was on a bit of an emotional roller coaster, too, because we had Teddy and then she was tracking the ups and downs of a very intense primary.

How did COVID affect your family life, your parenting? How did you see people? I’ve heard some really funny stories of people gathering in odd places to be able to see family.

My parents and her parents both quarantined so they could see him, and they were just a lifeline. This is not exactly a novel sentiment, but, boy, oh, boy, having parents and in-laws nearby is a lifesaver. And having them quarantine so they could help was huge. We spent a lot of time outdoors trying to see people, but honestly, we just didn’t have a lot of in-person interactions; it was a lot of Zooms, and it was a lot of Zooming for me, of course, because I was trying to campaign virtually. But then also Zooms to let people try to meet him at a time when they couldn’t travel to see him.

Both of your parents are involved very prominently in the medical field. Your father is the top deputy to Dr. Anthony Fauci at the National Institute of Allergy and Infectious Diseases, and your mother is CEO of Dana-Farber Cancer Institute. Do you feel like you knew too much about the pandemic? Was a little bit of knowledge a dangerous thing?

We’re JewishBoston.com, as you know. How does spirituality and religion play a role in your parenting?

My mom, as you may know, is Jewish, and I was raised in the Jewish tradition and really, the cornerstone for us with the Jewish faith is its emphasis on two things: the family and supporting your family, and second, on curiosity and being intellectually inquisitive, being a religion that prizes education and learning. And those are two highly salient features for us this last year because my family was incredibly supportive of me and of Teddy and of Michelle during a very intense period for us as a family. And it also helped me, I think, underscore the importance of high-quality information and of following the science and putting science in the driver’s seat for this pandemic.

What lessons have you learned about parenthood? What would you say to other people who are kind of muddling through?

Going back to what I was saying about feeling blessed in a counterintuitive way to be able to spend so much time with Teddy early on because we were in quarantine, I think as we have more kids, and as I think about lessons that you almost want to artificially impose on yourself, I think fathers in particular don’t spend enough time or let work take over, even in the period when you might be taking paternity leave. And for me, regardless of whether there’s a pandemic or not, next time we have a kid, I want to be spending that much quality time early on.

I’m going to ask you a policy question. How can we make paid family leave more available for parents?

My friend and colleague, Katherine Clark, says that child care is infrastructure, and she is 100% right. We need a much more expansive and subsidized network of child care from zero through adolescence, and we need paid family and medical leave. Letting parents spend time with their kids early on and ensuring that parents have access to high-quality child care while they’re balancing home and work is basic infrastructure for the 21st century. If the pandemic is what’s necessary to catalyze government action, then that might be a silver lining.

On a lighter note: Biggest parenting fail since Teddy was born?

My wife and I have been going back and forth about this recent revelation about toxic metals in baby food. We’ve definitely done an inventory of our shelves and that’s an upsetting thing to read as a new parent, and we’re going to do more research. I think we need to do more research broadly, like I don’t want to jump to extreme confusions from one article, but no one wants to get implications of food that they’re giving their kid is not safe.

Any tips for getting a baby to sleep?

What has worked for us? We rub his belly.

Is he a good sleeper?

He actually is a good sleeper. I really cannot complain.

Any words of advice to new parents?

I don’t feel qualified to be giving advice at this point. Let’s see how we do with this one.