Ignorant of my faith, I could not turn to Judaism when my brother died 25 years ago. Ritual was not a part of my upbringing, and it lingered in the shadows through my 20s and most of my 30s. Only in the last decade have I started to follow the path that Judaism sets for mourners. Jewish ritual now smooths salve on the long-ago wound.

I am no longer in the throes of grief, yet I, like all mourners, need to acknowledge year after year that my brother existed, that my family and I suffered a huge loss, that we have lived years without him, and that yes, it is possible to live a happy life after loss. I need, too, to let community surround me when I remember my brother.

My following of mourning rituals intensified the most shortly after I turned 40. I began studying for an adult bat mitzvah ceremony that I led in the May of 2006. The date of my ceremony chose the portion I would chant in my Torah. But fate played a hand. My passage was about the circle of mourners described in the book of Leviticus. I chanted the portion, then analyzed it. Judaism, I said at my ceremony, gave mourners a gift: a structure for grief. It is too late to change how I mourned my brother in the first years after his death. Back then, I worked hard to push aside the pain of grief. I tried the common American way: Move on.

In my studies for the bat mitzvah, I learned about the Jewish rituals I missed in the aftermath of my brother’s death. Jews commonly observe shiva, seven days in which mourners refrain from work and life’s normal routines. Then, there’s shloshim, the 30-day period of mourning that follows where mourners slowly re-enter normal life. I observed none of those, but other rituals I could practice throughout my life have become a mainstay.

For me, the ritual starts with a flame, the flame of the tiny wick of a white memorial candle I typically buy at a grocery store. On the eve of my brother’s yahrzeit each year, I light the candle. Sometimes, I say the Mourner’s Kaddish before lighting the candle. Sometimes, I just light the candle and think of an internal prayer in memory of Kevin, who cared little for Jewish ritual. Throughout the 24 hours of the candle’s life, I occasionally glance at the flame. Sometimes, it as if my brother’s spirit dances in the shadows reflecting against our kitchen wall. The light is warm, healing and comforting because every year, I let that flame glow.

I now make it part of my mourning ritual to go to a Shabbat service to hear my brother’s name read. Sometimes, I go alone, but many times, as I will do tonight, my husband – who I only met in 2005 and married the next year – stands next to me to offer a hug if I need one. Some years, I cry when I hear the name, Kevin Wertheimer. Sometimes, I smile. Sometimes, the emotion hits as everyone stands and recites the Mourner’s Kaddish, a prayer in which God is praised repeatedly. It is a prayer that asks us to still praise God even when our hearts are so heavy. I have never been sure if I believe in God. But I believe that something nonhuman does play a role in helping us recover when loss seems insurmountable. I say the Kaddish, and I do feel a sense of something supernatural.

In recent years, I also have gone to memorial services connected to the most significant Jewish holidays, like yizkor at Yom Kippur, and have written about these experience in previous articles and blog posts. I let myself on the anniversary of my brother’s death and at these services think of my fun-loving brother Kevin and how I miss his presence in my family’s life. 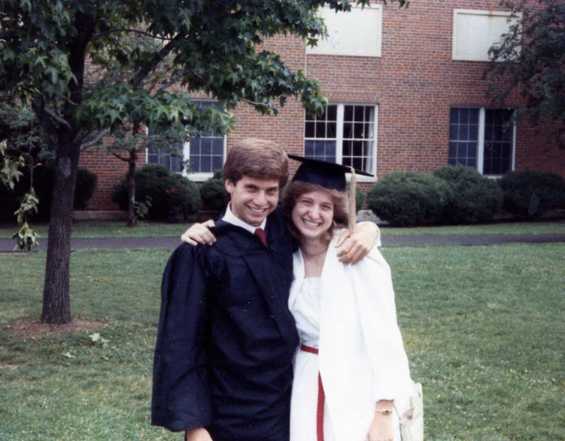 I mourn for what he has missed and for what I missed because of his absence. Most importantly, I do not mourn alone.

My writing here comes from several sources, from my yet-to-be-published memoir about journeying through grief and getting closer to my Jewish faith and from the speech I wrote for my adult bat mitzvah ceremony in May 2006. What do Jewish mourning rituals do?

As I wrote in my bat mitzvah speech:
Jewish mourning rituals recognize that the loss of a mother, a father, a brother, a sister, a spouse or a child is a heart-wrenching grief. The rituals give us tools to cope, but we can’t use them if we don’t know what they are or how to begin. Don’t force the hurt and anger out in that first week. Share your memories and the tears as well as the laughter. Then, gradually, when the timing is right, embrace the joys of life.

Note: This is part two of a three-part series of blog posts – originally posted on my blog – reflecting on the 25th anniversary of my brother’s death as the date, March 1st, approaches. Watch for part 3 to run on March 1st. Below is a slideshow of photos. Click on the main picture to go full screen.