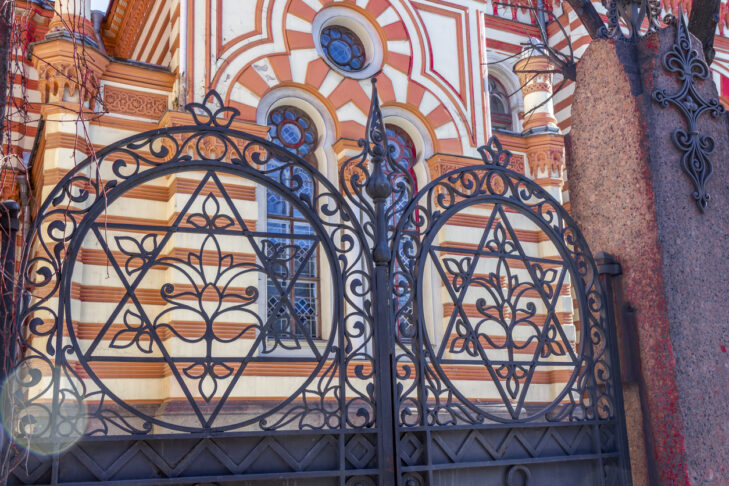 Brookline resident Sam Klebanov was born in Russia in 1997 and came to Massachusetts when he was 6 years old. Klebanov’s family, Jewish émigrés from St. Petersburg, own Petropol, a Russian-language bookstore in Newton. Sam has worked in the family business since he was a young boy.

Now a business journalist, Klebanov recalls that at one time, the bookstore had a publishing arm in St. Petersburg, releasing a dozen titles a year. Klebanov recently spoke to JewishBoston about the ongoing crisis in Ukraine, his bookstore’s prospects in the wake of U.S. sanctions against Russia and watching the tragic events of Kyiv unfold as a Russian Jew.

How have these tragic events in Ukraine affected doing business with Russia?

My dad’s bookstore maintains ties to Russian publishing houses and writers who either emigrated from Russia or are living there. We source most of our books from Russia. We’ll see whether we can maintain doing business that way. My grandparents still live in St. Petersburg, and I’ve frequently traveled there. The last time was this past August. Unfortunately, I’m not sure when the next time will be.

What sorts of books did you publish when your family was running a publishing house in St. Petersburg?

One of our more popular writers in translation was the Israeli writer Meir Shalev. I don’t know if this is still true, but Shalev’s work was very popular in Russia. I believe it’s because many of his literary influences are from Russian literature. It was the basis of the special relationship he had with his Russian audience. My dad’s former publishing house was one of the first to publish him.

As a Russian Jew, how are you personally experiencing Russia’s invasion of Ukraine?

For a long time, we Jews in Russia compartmentalized our attitudes toward the government, the people making the political decisions in our country and some of the country’s foundational institutions. St. Petersburg is a gorgeous city with a very rich history that includes a significant cultural heritage. It’s one of the cultural seats of the country.

It’s becoming even more challenging to interact with any connections we have who are not necessarily on the same page as we are. I have some relatives who buy into the narratives they see and hear on Russian media. They seem to inhabit a different dimension of reality. They don’t understand that this isn’t a limited-scale operation; this is an aggressive war that the government is waging against a neighboring country. In peacetime, it’s easier to ignore that side of people you love and respect. We don’t discuss politics. But when this dominates your thoughts and feelings and when you’re heartbroken about what’s going on in Ukraine, there is a sense of shame and sorrow about what the Russian government is doing.

What fallout do you foresee from Russia’s aggression against Ukraine?

Russia and Ukraine share a common history and economic and cultural ties. Seeing those ties shatter in a matter of weeks as Ukraine is decimated economically and politically is devastating. Not that Russia had a very good reputation in the world political arena before this, but now, any positive historical legacy is gone. Russians, and many Russian Jews, were always proud of Russia for having been on the right side of history in World War II. They might have resented the Soviet government, but they were proud to honor that legacy. That has been negated by this horrible step their country has taken—a step that completely undermines any residual integrity they could have had. People will regard Russia as visiting war crimes and devastation on Ukraine in the years to come.

What has the mood been among your customers?

We have a diverse customer base that spans all the post-Soviet countries. Most people we serve grew up in the Soviet Union and speak Russian. Others who grew up in post-Soviet times—people from places in the former Soviet Union—some of them speak Russian. In Russia and Belarus, everyone speaks Russian, and in Ukraine, there is a significant minority of Russian speakers, even in the post-Soviet era. Customers understand that in no way do we condone what Russia is doing. We’re as horrified as they are about the events in Ukraine. From what I’ve heard from certain people and the local Russian community on social media, there is an overwhelming rejection of Russia’s actions in Ukraine.

As owners of a Russian-language bookstore, we have not experienced xenophobia. Our customers support us and acknowledge the challenges of importing books from Russia. They’re not prepared to reject their Russian culture. At the same time, a small minority of people say they don’t want to patronize the store anymore because they’re done reading in Russian. I believe that’s an emotional reaction. People are shocked, especially people for those whom Russian culture has been a formative part of their identity. They have to find a way to live through this and internally dissociate from Russia’s actions.

What other challenges have you encountered?

Another challenge is that we’re also an event management company. Before COVID-19, we organized many events for the Russian-speaking community here, and we’ve collaborated with Center Makor, a Russian-Jewish community center in Boston [supported by CJP]. We’ve hosted several Russian writers, thinkers and performers. I would guess that most of these people are not cozy with the Putin regime. These people don’t like the government and never condoned any of their actions. Now, it’s unclear whether we will be able to host these Russian artists.

We’re hoping to resume hosting these people in Boston and create opportunities for a Boston audience and these Russian artists and intellectuals to come together. These people make up an important slice of Russian society and promote the idea that Russia is not just Vladimir Putin or his cronies. Russia is a culturally rich county with much to offer to the world.