In July, Mayyim Hayyim sent me to attend the COJECO Symposium for Russian-speaking Jews. COJECO (Council of Jewish Emigre Community Organizations) is the coordinating body of the Russian-speaking Jewish community of New York. This symposium gathered 50 professionals from Jewish organizations throughout North America to ask: what works in engaging Russian-speaking Jews (heretofore RSJs)? What do we (as RSJs), think, feel, and do when it comes to being Jewish? What do we want the future of Russian Jewish engagement to look like? As the Associate Director of Education and resident RSJ at Mayyim Hayyim, I was excited to think with others about how to specifically engage RSJ’s at Mayyim Hayyim.

Arriving at the symposium, I was met by the whole spectrum of RSJs: we were kippah-covered men with long-beards, short-skirted women in heels, sheitel-ed women (wig covering the hair of some married women) with long skirts, and everything in between. We were Reform and Orthodox rabbis, women and men, young and not-so-young, born in the Former Soviet Union and the U.S., educators and organizers, and all leaders in our fields.

These were my people. 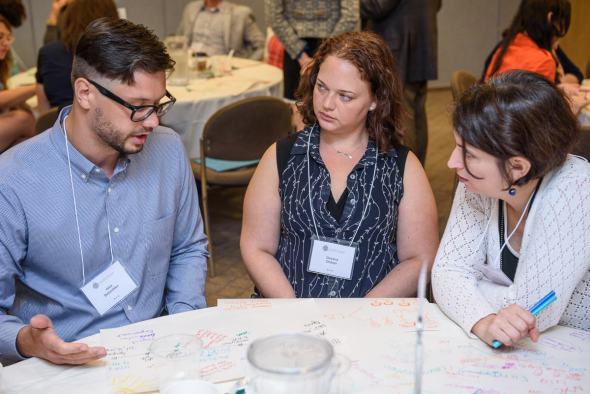 As a first generation RSJ, I’m acutely aware of the cultural gaps between Soviet and American Jewry. Historically, American Jews have tried to engage RSJs by getting us to assimilate into American Judaism. Congregational memberships were given at a discount, day schools offered scholarships for the children of new emigres (both myself and author Gary Shteyngart were the reluctant beneficiaries of such scholarships). Then American Jews waited for RSJs to join the club.

Some decades later, we know that buy-in never materialized. Judged by the standards of American Jewish life (which are themselves shifting fast), we are seemingly disinterested. We’re 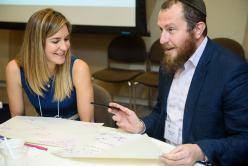 underrepresented as philanthropists, B’nai Mitzvah students, and shul-goers. The strategy, (make it cheap, and they will come), though well-meaning, failed because we were not co-creators of our own Jewish experience. We were often seen as beneficiaries of services, a mitzvah project, as Benjamin Goldschmit recently wrote. Forget for a moment the major barrier that condescension creates –many of the attempts to engage us simply ignored the history we came with.

Jews in Soviet Russia lived in a climate where making a choice to do something even vaguely Jewish was hazardous. Beyond religious persecution, all were repressed by a prescriptive and propaganda-heavy regime. Understandably, they (and the children they raised) are weary of ideologies, religious or otherwise.

As this symposium of RSJ communal professionals could tell you: we love to celebrate our heritage, and I don’t mean eating smoked fish. So, what does that look like? It’s a sense of near-tribal allegiance to other Jews and the state of Israel; it’s the knowledge that family comes above all else. A belief in the power of education and hard work as a path towards flourishing, and a gift for the kind of hospitality that borders on the religious. It’s the way an argument that makes your blood boil can be a sign of affection. I was reminded of all of this at the symposium when hearing about the programs my colleagues are creating. It was also obvious in the way we were together.

The American Jewish world is now recognizing that synagogue life is not exclusively the way Jews access our tradition. Our cohort of RSJ professionals have been working with this limitation for years, and moving forward, this is a place ripe for partnership. As a global, interconnected and diverse people we need opportunities that feel accessible, open-minded and hands-on more than ever. The RSJ leaders I met at this symposium are trained in the art of removing barriers while doing all of the above. Have we perfected our trade? No, not yet. But we’ve figured out ways to let go of the prescriptive, in favor of mutual respect; welcome people heartily and mean it, and we have a willingness to listen when people feel like something ‘isn’t for them.’

I felt proud, knowing that I was representing Mayyim Hayyim, an organization that does these things already, and proud to count myself among the individuals at the symposium. Mayyim Hayyim has done a lot to empower a wide diversity of Jews to feel that mikveh immersion is accessible; yet we have a long way to go in figuring out how to do the same for Russian-speaking Jews. For now, I’m the resident RSJ at Mayyim Hayyim who translates at the education program I’m teaching and shares Mayyim Hayyim’s story in our native tongue. What will the future of RSJ engagement at our mikveh look like? I don’t know yet, but I’m excited to build it with my American and RSJ colleagues.

Leeza Negelev is the Associate Director of Education at Mayyim Hayyim. She loves smoked fish.