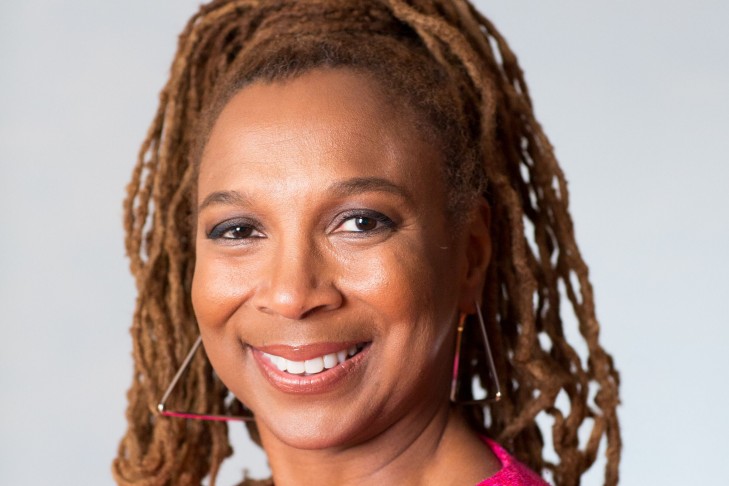 In 1989, Kimberlé Crenshaw, a professor at UCLA School of Law and Columbia Law School, wrote an essay in which she invented a term called “intersectionality.” For Crenshaw, the word—a potent signifier of showing identity and its relationship to power—was created out of dire necessity. It was a term she intended to illustrate the difficulty that black women faced when other constituencies failed to represent them.

Crenshaw was at Brandeis University last week to accept the Joseph B. and Toby Gittler Prize. Professor Joseph B. Gittler founded the award to acknowledge “outstanding and lasting contributions to racial, ethnic and/or religious relations.” The award, administered by the International Center for Ethics, Justice and Public Life on behalf of the Office of the President, also carries a $25,000 prize. Previous winners have included Martha Minow, the Rev. Gustavo Gutiérrez and Patricia Hill Collins.

In addition to her groundbreaking work on gender and race—work that includes research on violence against women, racial inequality and affirmative action—Crenshaw also co-founded The African American Policy Forum in 1996. The forum is “a gender and racial justice legal think tank, which houses a variety of projects designed to deliver research-based strategies to better advance social inclusion.” In 2011, Crenshaw went on to found the Center for Intersectionality and Social Policy Studies at Columbia Law School. The center studies how gender, race and class relate on different levels.

Crenshaw capped her three-day visit to Brandeis with a one-hour lecture she delivered to a standing room-only crowd. In her talk, she gave a brief history of intersectionality and then turned her attention to the future. “I’m not reclaiming intersectionality for the exclusive use of black women,” Crenshaw told the audience. “Intersectionality is a prism that can be used to interrogate power and resistance across limitless contexts. But resisting [black women’s] displacement in feminism and in anti-racism was the objective that ushered intersectionality’s arrival on to the discursive scene. So resisting the erasure of black women in intersectional discourse today is simply carrying forward its origins into a new era. There is no moment where we can wipe our hands collectively and say, ‘Time to move on.’”

One of the examples Crenshaw presented was the discrimination black women have faced in the workforce. Black women were not slotted into the neat categories of female or black. When they were unable to sue simultaneously as both women and blacks, Crenshaw said intersectionality perfectly captured their struggle. The courts, she noted, kept “getting it wrong” about discrimination. Black men and white women were legally covered when it came to racial and gender discrimination. But black women did not technically fit into either category. Crenshaw observed that black women were thought to be making a “compound claim. They were told, ‘You can’t do that. That would allow you to put together two causes of action and allowing that would be preferential treatment.’ [The concept of] intersectionality was what the courts were missing.” In other words, the courts didn’t take into account the many ways in which black women not only experienced discrimination, but were not supported within various constituencies.

This situation came into play again in 1991 when Anita Hill accused future Supreme Court Justice Clarence Thomas of sexual harassment during his confirmation process. “Sexual harassment,” said Crenshaw, “was seen as a white woman’s hang-up.” Some in the black community viewed Hill as a liar or even a traitor to her race. Crenshaw was on Hill’s legal team and saw Hill as a victim of a “racist patriarchy.” Crenshaw contends that such a patriarchy has pushed black women out of politics and obliterated their history. Looking at black women’s history through the lens of intersectionality brings the barely-known struggles and accomplishments of black women to the forefront. Crenshaw argues that this disregard for black women has brought on a “historical amnesia” when it comes to their history and legacy.

Among the examples Crenshaw cited was the establishment of the Montgomery Bus Boycott. “The quiet, courageous and often thankless work of black women” has been virtually overlooked in the founding of that movement,” she said. Recy Taylor is practically unknown, and Rosa Parks gets little to no credit for conceiving the boycott. Crenshaw said those wrongs must be corrected even “at the risk of being told we’re not good allies, just because we insist on justice for all.”

Insisting on justice for all has recently manifested in #SayHerName—a movement that is much more than a hashtag for Crenshaw. She makes it a point to memorialize by name each of the black women who have been the victims—oftentimes fatally—of police brutality. At her lecture, Crenshaw took a moment to ask the audience to raise their hands if they recognized the name of a victim. Hands shot up for names such as Michael Brown and Eric Garner. But when it came to the women, much of the audience lowered their hands after not recognizing those names.