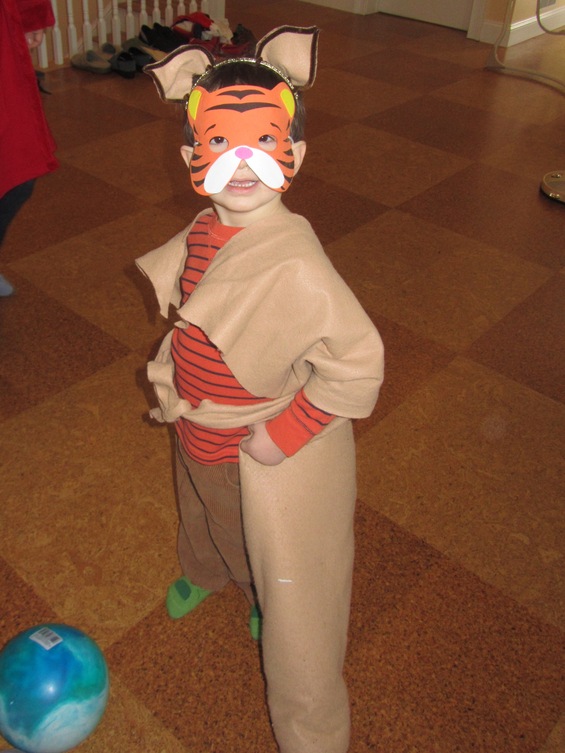 Last week I wrote about my three and half year old, Zalmen, who wanted to be a kangaroo for Purim, and I was sure he would not change his mind.  Well, I was right and I was wrong.  He still wants to be a kangaroo, but he wants to be a tiger too.  Now, its my job to figure out how to make him a tiger-kangaroo.  I suggested that he could be a “tigaroo.”  “No,” he answered, “a tiger-kangaroo.”  For him it’s no problem to be both.  They can be integrated into one costume, but both fully present.
When Zalmen was born, actually starting before he was born, when I was pregnant, I struggled to figure out how to be a rabbinical student and a mom at the same time.  I worried about maintaining my focus on my studies, being present and perceived as present, remaining a good student.  I also worried about having enough time and attention for my baby, being able to hold him enough, nurse him as much as he wanted and needed, be there for him during that first year of extraordinarily rapid development.  I wanted to do and be both, and do it well, and I felt sure I could figure out how to do it.  For me, doing both meant that my worlds collided, that one informed the other, that I wasn’t a rabbinical student despite my role as mother, but through my role as mother and vice-versa.  When I was pregnant with Zalmen, I couldn’t stop thinking about pregnancy, babies, the parenthood process, but I could relate it to Torah.  So I started doing my school assignments with a focus on birth and babies.  And I brought that Torah that I learned into my birth process, into the way I thought about what I was going through and how I found the confidence to give birth and make choices for my baby.
It helped that my teachers and classmates encouraged me to bring my new mom self to my studies, that my family supported my integrating my studies into my birth process.  That both my family and my school helped me be present in class with my babies.
I wouldn’t go as far as to say that I’ve succeeded in bringing all the elements of who I am to everything I do.  I agree with the JWI article that it wouldn’t be possible or even appropriate to do so entirely, but I love the suggestion that we take Purim as an opportunity to get in touch with the aspects of our identity that we feel are hidden, that we wish we could bring out.
So here’s to Purim, a holiday of hiddenness and disguises, to revealing our true identities and getting in touch with the aspects of our identities that make us feel strong and righteous.
I want to conclude by suggesting an affirmation for women going into the birth process.  An affirmation is something a woman in can repeat to herself to remind herself of something she believes, that will help her get through labor with confidence.  Maybe the best thing that we can get out of the Purim story is the example of Esther as a confident Jewish woman who can stand up for herself and the people she cares about even in the face of fear, threat and danger, and can accomplish the seemingly impossible.  So when labor starts to feel scary, when the self-doubt starts to creep in, I suggest an affirmation from this Purim’s G-DCAST.  “My name is Esther, and I am Jewish, and I am fierce!”  And maybe, just maybe, the birth team, (partner, doula, midwife, doctor, mom, sister, whoever is present) will respond, “Go Esther, go Esther, go Esther, go Esther!”