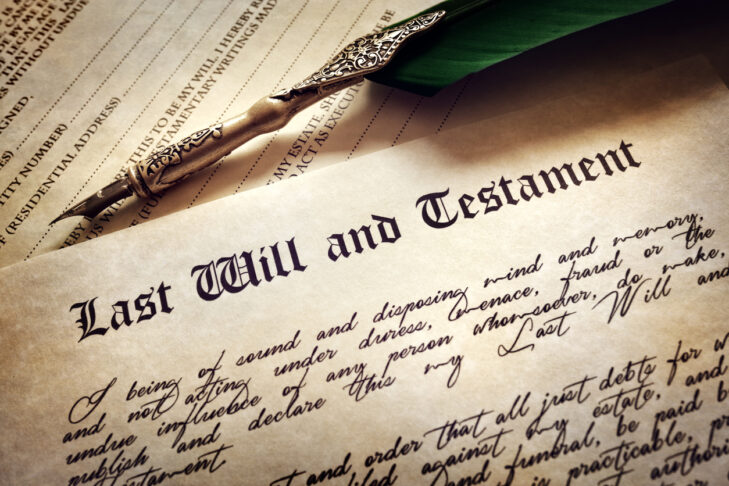 In this age of COVID-19, we’ve all seen the scenes in newspapers and online. Desperate for connection to his mother in the ICU, a man recruits a nurse to bring in his picture and read what he has written to her on a card. A daughter FaceTimes with a member of her father’s medical team, who holds the phone near him so they can see each other for a few brief moments. A hospital chaplain helps someone who didn’t arrive on time and has questions that can no longer be explored with a loved one. At such liminal moments, words have amplified power to heal wounds and foster acceptance; but they can also reinforce estrangement and deepen pain. Sometimes they do both.

In this week’s Torah portion, Vayechi, Jacob gathers his sons and grandsons to his deathbed to offer his final words. He is at the end of a long life filled with adventure, conflict, anger, fear, deep love and devastating sorrow. He has deceived others and has himself been deceived. Jacob’s poetry is beautiful, but the message he gives is complex, and to the contemporary reader, disturbing.

Death in Genesis is generally a low-key event. Abraham purchased the Cave of Machpelah as his family’s burial site. Sarah was buried there. When Abraham dies, Isaac and Ishmael, the banished son of Abraham and Sarah’s handmaiden Hagar, come together to bury their father and then tragically take leave to pursue their individual destinies that were foretold by their father’s blessings many years before. Abraham’s offspring from his wife and the concubines he took after Sarah’s death are given gifts, and, like Ishmael, are sent away to protect Isaac’s right as Abraham’s sole inheritor. In the next generation, Jacob, coached by his mother Rebekah, tricks Isaac into giving him both his blessing and his birthright, rather than to his older brother, Esau. After learning this, Esau pleads:

“‘Do you have but one blessing, my father? Bless me, too, father?’ And Esau raised his voice and wept and Isaac, his father, answered and said to him, ‘Look, from the fat of the earth be your dwelling and from the dew of the heavens above. By your sword you shall live and your brother shall you serve. And when you rebel you shall break off his yoke from your neck.’”

Fearing Esau’s fury and might, Rebekah counsels Jacob to flee to her brother Laban, though like Isaac and Ishmael before them, the two reunite to bury their father, Isaac, at the Cave of Machpelah. Rebekah will also be buried there, followed by Leah, Jacob’s unloved first wife, who was thrust on him through the schemes of Laban. Jacob’s beloved wife, Rachel, for whom he toiled in Laban’s house for 14 years, died birthing Benjamin when the clan was on the move, and is hastily buried on the road to Efrat where, tradition has it, she bitterly weeps as centuries later she will see her children exiled and will await their return. Jacob will also be buried with the others at the Cave of Machpelah.

Jacob sires a large family and accumulates great wealth and the family remains united by its commitment to an invisible, borderless god. But, soon enough, we see Jacob jeopardize other filial relationships. He favors Joseph because, the Torah explains, he is a ben z’kunim, son of his old age. Another likely factor is that Joseph is the child of Jacob’s beloved wife Rachel, and not of Leah or the concubines Zilpa and Bilha, who also bore him children. Jacob encourages Joseph’s dreams of dominating the family and aligns with him by asking Joseph to tattle on the others. In full view of everyone, Jacob gives Joseph an ornamented tunic: “And the brothers saw that it was he [Joseph] that their father loved more than all his brothers and they hated him and could not speak a kind word to him” (Gen. 37:4).

The brothers subsequently connive and, instead of killing Joseph, as two sons advocate, they leave him to be sold into slavery in Egypt, returning home to tell their father that Joseph has been devoured by a wild animal. Decades pass. Jacob continues to mourn his lost son while Joseph proves his mettle by being helpful and honorable as he works his way up to become second only to Pharaoh himself. When the brothers journey to Egypt to purchase food during a famine, Joseph masterfully creates the conditions for the family to reunite and live peacefully together.

Now Jacob is dying. “Gather round,” he commands, “That I may tell you what shall befall you in the days to come” (Gen. 49:1). But instead of using the occasion for moral or religious instruction—if you act in specified ways, then you will succeed—or expressions of connection, his statement includes affirmation, castigation and simple description of the men and their eponymous tribes. There are winners (Judah and the House of Joseph), losers (Reuben, Shimon and Levi), and the others who are simply depicted by geographic, vocational and other traits.

First-born Reuben, who slept with Rachel’s handmaiden (which is considered incest since she is set aside for Jacob) is told: “Prevailing in rank and prevailing in might…You’ll no more prevail for you mounted the place where your father lay” (Gen. 49:4). Turning to Shimon and Levi, who massacred the men of Shechem after Jacob promised that none would be harmed, Jacob said: “In their council let me never step foot…For in their fury they slaughtered men, at their pleasure they tore down ramparts. Cursed be their fury so fast and their wrath so remorseless” (Gen. 49:6).

In contrast, Judah and the House of Joseph (including Ephraim and Menasseh) are praised in lengthy statements. Judah is told that his land will flourish with vineyards and, more importantly, that he will be acclaimed by his brothers, successful with his enemies and will “hold on to the scepter” (Gen. 49:10). King David and, by extension, the messiah, will be from this tribe—a high honor, indeed! Joseph is depicted in glowing terms. While he faced adversaries who “savaged and harassed him,” Joseph remained steadfast and so he receives unqualified blessings:

“From the God of your fathers, may He aid you, Shaddai, may he bless you—blessings of the heavens above, blessings of the deep that lies below, blessings of breasts and womb. Your father’s blessing surpassed…. May they rest on the head of Joseph, on the brow of the one set apart from his brothers” (Gen. 49:25-26).

And the other brothers? Each hears one or two lines that mostly describe their tribal territory and how they will adapt to it. For example, Zebulun will live near the seashore and Naftali has beautiful land. Benjamin, whose mother, Rachel, died birthing him, will be known for martial prowess and is characterized as a ravenous wolf who “in the morn consumes the spoils, at evening shares out plunder” (Gen. 49:27). What, we wonder, might be going through each son’s mind as he hears his father’s words? This is no even-handed parent! Like giving only one son a magnificent garment, Jacob’s statements can cause jealousy and reinforce rivalry. We can only imagine what some sons were feeling when they heard the six or seven words allotted to them. Should not all brothers be guided to live a worthy life?

Jacob repeats another family theme: a birthright is stolen, this time with no complaint. In a ceremony adopting Joseph’s sons, Jacob insists on putting his right hand on Ephraim’s head, even though the other child, Manasseh, is older. When Joseph tries to correct this, Jacob refuses, saying, “‘I know my son. I know. He too shall become a people, and he, too shall be great. But his younger brother shall be greater than he, and his seed shall be a fullness of nations.’ And he set Ephraim before Manasseh” (Gen. 47:19-20). But unlike the actions of Rebekah and Isaac when Esau lost his birthright and blessing, Jacob blesses both boys together:

“The God in whose presence my fathers walked, Abraham and Isaac, the God who has looked after me all my life till this day…may he bless the lads, let my name be called in them and the name of my fathers, Abraham and Isaac, let them teem multitudinous in the midst of the earth” (Gen. 48:16).

In the next chapter, Exodus 1, we see that the family is transforming from being a group of families into a collective identified as Israelites. Jacob might have given them guidance: words, perhaps, that tell what is needed to survive, to thrive? Words that would reinforce their faith in the God of their ancestors? Words that might foster cooperation?

A genius of the Bible is that though the tales are from a radically different time, they deal with universal and timeless dynamics. As generation after generation grapple with the sacred texts, new insights emerge. While not wanting to impose current psychological notions on this ancient family, it is hard for me not to judge Jacob harshly. He ignores the challenges that his sons and their families face. He leaves no words to encourage their cooperation—something that is important to their future. He fosters jealousy, not teamwork.

While the tribes of Judah and Joseph might actually deserve the dominant role in Israelite history, could Jacob have been more encouraging and helpful to the others by providing details about their land or giving them advice on how to stay together? Perhaps such guidance might even have changed the outcome when, in the days of Kings David and Solomon, the unified kingdom was torn asunder. To be fair, Jacob’s actions reflected the legacy he had received from his forbearers, and they remind us that, once introduced, favoritism, rupture and deception are hard to eliminate from a family—a lesson still relevant today.

This last will and testament, as some commentators call Jacob’s dying words, is one part of his legacy. And while my counter-narrative has him saying some different things, what he did say is consistent with how he lived. Among the many things that this parasha teaches is that as we live our lives we are challenged to become clear about the legacies we want to leave and then to act accordingly. And when we receive a call, as we inevitably will, and rush to bid someone farewell, may our presence, words and actions comfort our loved ones and ourselves.

The translations above are from Robert Alter’s “The Hebrew Bible: Translation with Commentary” (Norton, 2019).

Susan Shevitz, Ed.D., is a member of the Hebrew College Board of Trustees and a former adjunct instructor in the Rabbinical School. She is also a savta (grandmother) to four wonderful children.