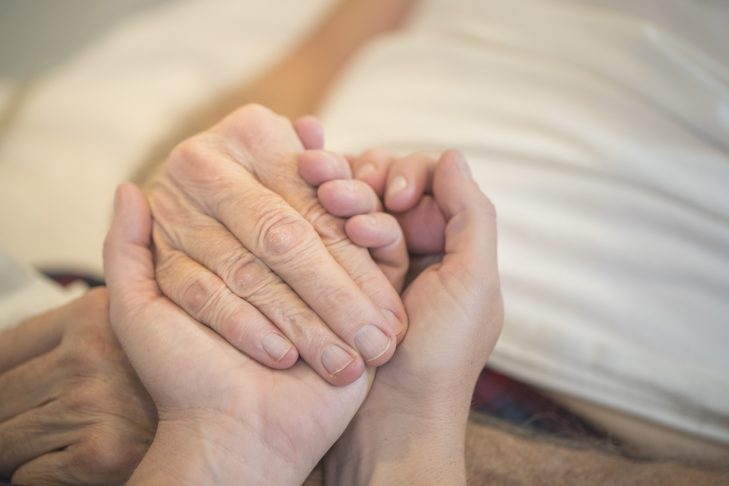 My mom’s journey with stage 4 lung cancer started with a bang, with ever worsening scans, with aggressive chemotherapy, and with deep, heartfelt conversations. I knew that things had gotten bad when my mom, a lifelong worrier, told me on the phone that her anxiety was gone: “Joe, I feel like this is all making me understand that I don’t need to sweat the small stuff.”

I immediately booked a flight to her home in Pittsburgh. The beginning of healing was much more subtle than the onset of the cancer. Her tumors gradually shrank as my mom was put on progressively gentler treatments. Six months out from her initial diagnosis, my mom told me about her grave concerns about the delayed arrival of my brother’s new rug. I reminded her of her near-death affirmation of an anxiety-free future. She responded, “That was utter BS.” I was so relieved.

My mom is a member of an ever-growing community of people living with stage 4 cancer. They will never be cancer-free, but a new set of treatments holds back the growth of their disease, providing some cancer patients with additional years of life. I have spent years struggling to understand and process what it means to have a loved one living on the fragile edge of medical progress and prognosis curves. Is my mom healed or sick? Should I be grateful for her continued survival, fearful for the near-inevitable return of bad cancer, saddened that she has needed to go through any of this? In the last year, I have turned to a verse from this week’s Torah portion and its ritual echoes to hold the ambiguity of my mom’s status.

In Leviticus 7:12, we hear about the todah, the sacrificial offering brought as an expression of gratitude. Later Jewish literature transforms this sacrifice into a formula, referred to as “Gomel,” recited publicly as a thanksgiving after surviving one of four perilous situations: prison, seafaring, land travel, or disease. The survivor of the peril stands in front of their community on Shabbat and says: “Blessed are You, Lord our God, ruler of the world, who rewards the undeserving with goodness, and who has rewarded me with all goodness.” The community then replies: “May God who rewarded you with all goodness reward you with all goodness forever.”

As my mom’s health improved, the two of us began discussing whether it felt “right” for her to make this public proclamation of healing. Those conversations became the basis for my rabbinic school capstone. Over the last six months, I’ve been learning Jewish sources on gratitude and healing with people like my mom, who live in the realm of partial, non-linear, and non-perfect healing.

My mom’s favorite source about Gomel comes from the 18th-century Jerusalem bibliophile Rabbi Chaim Yosef David Azulai ben Isaac Zerachia, known as the Hida. In his legal work, “The Machzik Bracha,” the Hida takes up the case of a person who suffers from a chronic fever. The person’s fever will sometimes spike and incapacitate them and sometimes recede, leaving them relatively well. Should this person give thanks for healing and say Gomel during one of their respites from fever?

The Hida compares this person to someone who is traveling from one place to a distant town. After a long time on the road, they get waylaid in a small village. The Hida argues that this person would not proclaim thanks in the village. After all, they had not yet “arrived in the town that they had in mind [as a destination at the time of] their departure.” The Hida reasons back to the person with a chronic fever; if they had hoped to be permanently healed and were left with a lingering disease, they would not be able to cultivate the gratitude necessary to say Gomel.

While the “chronic fever” case isn’t a perfect stand-in for my mom, the two of us imagined that the Hida might be speaking to her situation. His words reminded us of advice she had received at the beginning of her treatment. After my mom described in an email the exhaustion of treatment and the road ahead, her cousin Jeff wrote: “That old cliche that it’s a marathon, not a sprint, actually doesn’t work because it is both. You just went through the sprint and now you face the marathon. You can expend the energy short-term, but now you are expected to sustain that energy over a longer period. If it wasn’t that you have no choice, it would be impossible.”

There’s both a truth and a cruelty to the Hida’s conclusion that the chronically ill person shouldn’t say Gomel at the rest stop. At once, the person has just sprinted to this place and might want to take a moment to breathe and to thank. However, before this person can bask in their Gomel, they are faced with the enormity of their journey, with the marathon still ahead of them.

I said something along these lines to my mom, who agreed with the bleakness of this picture. At the same time, she disagreed with the Hida’s conclusion. Specifically, she felt like a person’s destination need not be a fixed thing: “I feel like I have arrived. Given the parameters, I have arrived at ‘as good as it gets.’”

Of course, she set out on the journey of her illness with full recovery as her intended destination. That healing is no longer a place she can realistically reach, and she finds herself permanently at a rest stop. (Mom has nicknamed her launching point Pittsburgh, her destination as my home of Boston, and her rest stop Scranton, which lies in between). She says: “I didn’t make it to Boston, Joe, but I’m having a hell of a time in Scranton. It’s surprising; I didn’t know you could have this good of a time in Scranton.”

Joey Glick is in his final year of rabbinical school at Hebrew College. A proud native of Pittsburgh, Pennsylvania, Joey is an alum of Colorado College and the Graduate Theological Union. Before starting at Hebrew College, Joey served Jewish students at Vassar College. Joey currently works as the rabbinic intern at Nehar Shalom in Jamaica Plain, Massachusetts; Beth Jacob Synagogue in Montpelier, Vermont; and Beth Israel Congregation in Bath, Maine. Joey is passionate about interreligious dialogue, old-time fiddle music and his hometown Pittsburgh Pirates.