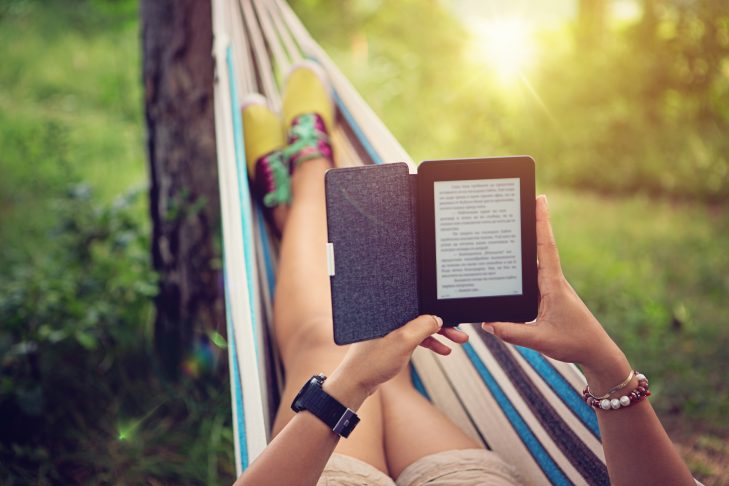 “Jerusalem Drawn and Quartered: One Woman’s Year in the Heart of the Christian, Muslim, Armenian, and Jewish Quarters of Old Jerusalem“ by Sarah Tuttle-Singer 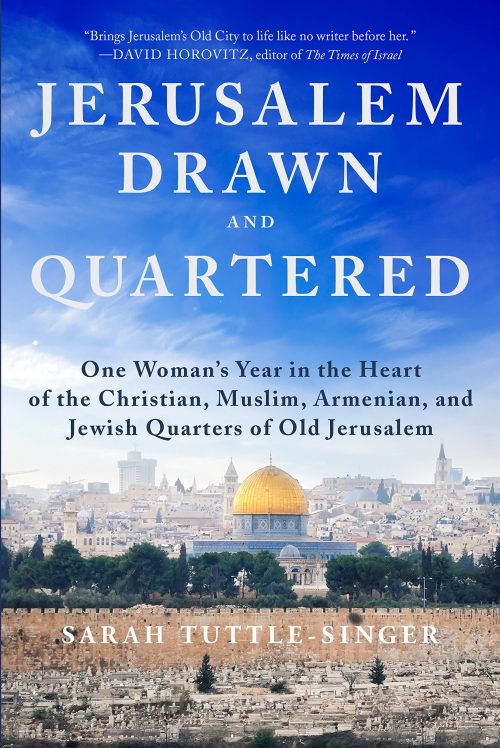 Sarah Tuttle-Singer’s gorgeous new memoir is an ode to Jerusalem. Tuttle-Singer, who has a substantial following on Facebook and Twitter and is also the new media editor at The Times of Israel, spent 2016 living in each of Jerusalem’s four quarters. She befriends Arab merchants, ultra-Orthodox residents and spends time in the city’s Armenian and Christian quarters. The result is a book that is as much a novelistic tour of the city as it is an intimate memoir of her complicated relationship with Israel as a whole.

Tuttle-Singer first visited Israel at the behest of her late mother when she was just 16 years old. Reluctant to go initially, she fell in love with the city. A Los Angeles native, she returned two years later; on that visit, Palestinian kids stoned her late at night near the Damascus Gate. Nevertheless, she persisted and returned for good in 2010 with her Israeli husband (now ex) and two children.

Through Tuttle-Singer’s eyes, we see Jerusalem at her best “in the morning when she’s still naked, before the shops are open and the scarves and jewelry cover the stone. And I like to watch her wake up and get dressed while I drink my jasmine green tea from the balcony overlooking the Jaffa Gate. Or earlier still, from the Western Wall, when sacred time meets sunrise, and Jews and Muslims pray together although separately behind their glass at the brink of sunrise.”

Tuttle-Singer has presented these terra sancta in a unique light—places that are also arguably the most contested real estate on earth, in all their raw and passionate beauty. 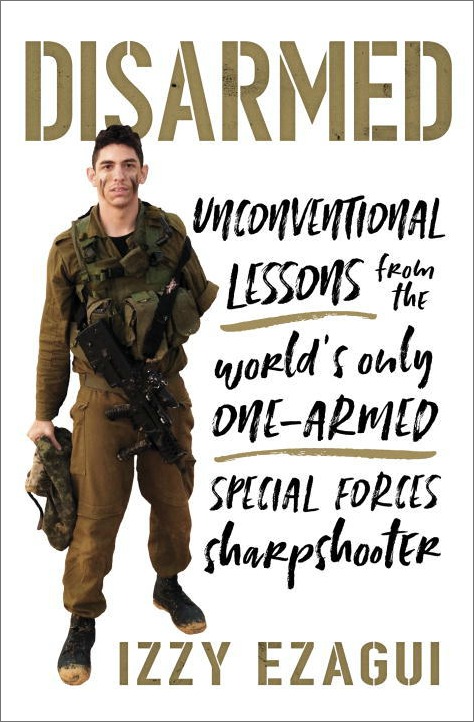 On Jan. 8, 2009, American-born IDF soldier Izzy Ezagui lost his dominant arm in a mortar attack on the border of the Gaza Strip. What follows is a poignant, frequently humorous account of his arduous recovery and re-enlistment as a squad commander. Six months after he lost his arm, Ezagui weaned himself off painkillers for his phantom limb, determined to see combat again. He miraculously passed all the tests that included shooting, reloading guns and unjamming rifles, as well as arduous physical tasks, such as pushups and climbing ropes.

Ezagui was raised in Miami in an observant Jewish household. His awkwardness as a young boy was made worse by the fact that his father was sentenced to prison for mortgage fraud. Ezagui attempts to right the course of his life by enlisting in the IDF. Today, at 29, he is an actor, writer and motivational speaker. Although his family relocated to Jerusalem, he no longer lives in Israel. He continues, however, to report for reserve duty in the country.

“Disarmed” is a quirky memoir, but it is also an admirable one. Ezagui reminds his fellow millennials that anyone can accomplish what they set out to do with the right attitude, determination, discipline and passion.

“Look Alive Out There: Essays“ by Sloane Crosley 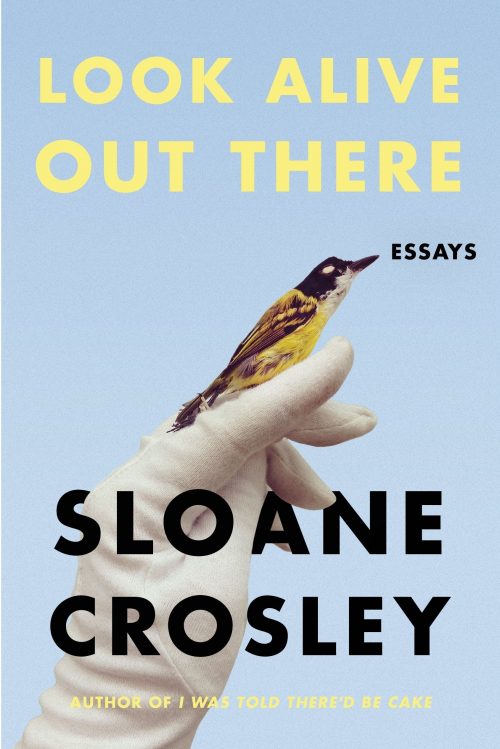 It has been a decade since Sloane Crosley published her wildly successful debut essay collection, “I Was Told There’d Be Cake: Essays.” Then, as now, Crosley’s wry and witty self-deprecation will surely make “Look Alive Out There” another bestseller. Crosley’s audience is ostensibly other millennials, but it would be a shame to write off this master of the one-liner as a voice most pertinent to her generation. As with all good writing, Crosley speaks to a broader audience, including this mother of millennials.

While Crosley, who is Jewish, is not strictly speaking as a writer of Jewish subjects—she crashes a shiva in her apartment building—she is involved with the Jewish Book Council. The group publicizes her work and, most recently, Crosley emceed the JBC’s awards presentation.

Crosley’s brilliant rendering of the human condition is consistently at work in “Look Alive.” In her evocative essay, “The Grape Man,” Crosley considers the death of her downstairs neighbor Don. An older man, Don lived alone and tended a lush garden outside his apartment. Crosley observes: “To live alone can be a glorious thing. Between jags of crippling loneliness and wretched TV, it’s an education in self-sufficiency, self-actualization and self-tanner. But it is possible to have too many rooms of one’s own.”

Crosley examines her own loneliness and isolation in “The Doctor is a Woman.” The essay showcases her ambivalence over freezing her eggs in her late 30s. Crosley is not sure she wants to be a mother but goes through the process anyway.

In the end, her writing in this collection and beyond epitomizes the notion that our lives may be uncertain, but at the same time, they are still driven by hope and love. 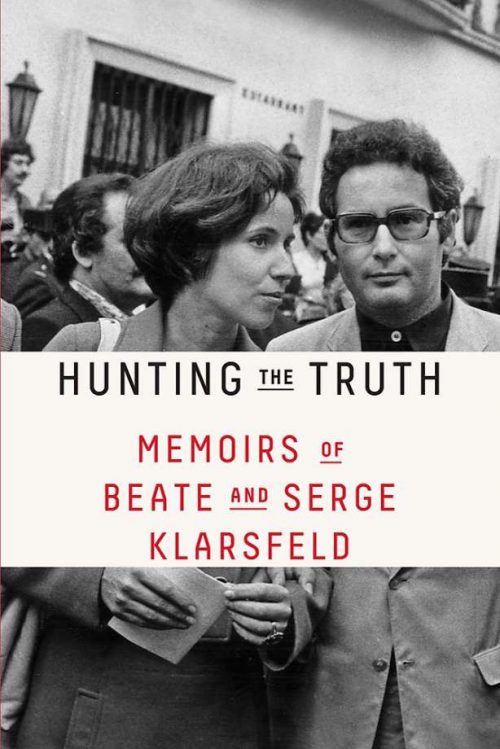 Husband and wife, Beate and Serge Klarsfeld are arguably the most famous and successful Nazi hunters in the world. In this fascinating, jointly written memoir—the Klarsfelds each pen alternate chapters—their riveting history comes to light. Serge Klarsfeld was 8 years old when he hid in a cupboard in his apartment in Nice as the Germans took his father away. The elder Klarsfeld perished in Auschwitz at the age of 39. “The night of that raid,” writes Serge, “has stayed with me all my life.”

That was 1943; the same year that Beate was 4 and living in relative comfort in Lodz with her godfather, a high-ranking Nazi. Beate writes that her parents weren’t Nazis, but they were conformists who voted for Hitler and ignored what was happening under Nazi rule. Beate grew up in Berlin and immigrated to Paris in 1960. Coincidentally, she arrived there on the same day that Israeli agents captured Adolph Eichmann in Buenos Aires.

Three years later she met Serge on a metro station platform. Serge’s story of losing his father deeply affected Beate, and together they vowed to bring Nazi perpetrators to justice. In their long and esteemed careers, the Klarsfelds have brought high-profile Nazis like René Bousquet, the former head of the Vichy police, Alois Brunner, Eichmann’s assistant, and Klaus Barbie, the “Butcher of Lyon,” who was finally apprehended after the Klarsfelds pursued him for 16 years, to justice.

Throughout the years, Beate was often arrested for acts such as chaining herself in the streets of Prague and Warsaw to protest anti-Semitism. She famously served a short jail sentence for slapping West German chancellor Kurt Kiesinger in Berlin. Kiesinger had been a member of the Nazi party and served in Germany’s Foreign Office during the war.

The French and German governments have honored the Klarsfelds for their work. But as Serge writes in this clear-eyed memoir, “Every account by a victim or a survivor is a stone in an edifice that will always remain unfinished, a fragment of an incomplete fresco expressing what the Holocaust was. That work is our legacy.”

“The Long Half-Lives of Love and Trauma: A Memoir“ by Helen Epstein 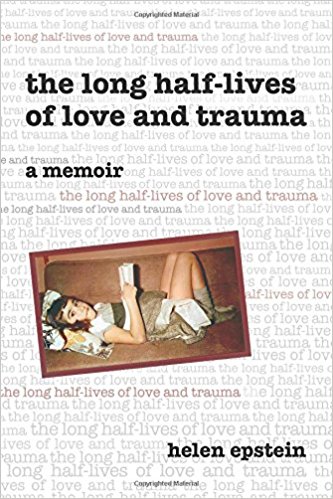 Journalist and memoirist Helen Epstein’s new book is the final volume of a trilogy dedicated to children of Holocaust survivors. In this book, Epstein focuses on her unusual adolescence, as well as her extensive investigation of memory itself. Epstein, who was born in Prague, grew up in New York City. The family apartment in Manhattan doubled as her mother Franci’s salon, where she designed couture clothing for the city’s socialites. It was a busy, occasionally even frenetic, atmosphere in which Epstein grew up. Her complicated childhood was the source of much conflict and trauma, something that Epstein gradually pieces together in her fascinating, multi-faceted journey of remembering.

To gather her thoughts, Epstein enlists the help of a childhood friend, former music teacher and long-ago lover Robbie. The cantankerous Robbie is both a help and hindrance for Epstein. Robbie clearly has his own emotional issues, which can alienate and draw in Epstein in equal measure. Epstein eventually begins to suspect that she was sexually abused as a child, and enters therapy to either recover those memories or to determine if they are false.

She and her therapist, Dr. M., the same man who treated her 20 years previously, begin an intense exploration of Epstein’s life in phone sessions. Epstein recollects her parents as survivors who valiantly tried not to become overwhelmed by their memories of the Holocaust. A beloved nanny, a survivor named Milena, raises Helen. Milena and her husband, Ivan, become close to the Epsteins and are surrogate grandparents.

What follows is a haunting, unforgettable narrative that melds family history, childhood and adolescent memories and the consequences of remembering brought about in intense psychotherapy. This is also a timely book—a book that considers the wide-ranging consequences of the #MeToo movement. Epstein is an expert researcher and a compelling writer, and her book deserves wide readership.