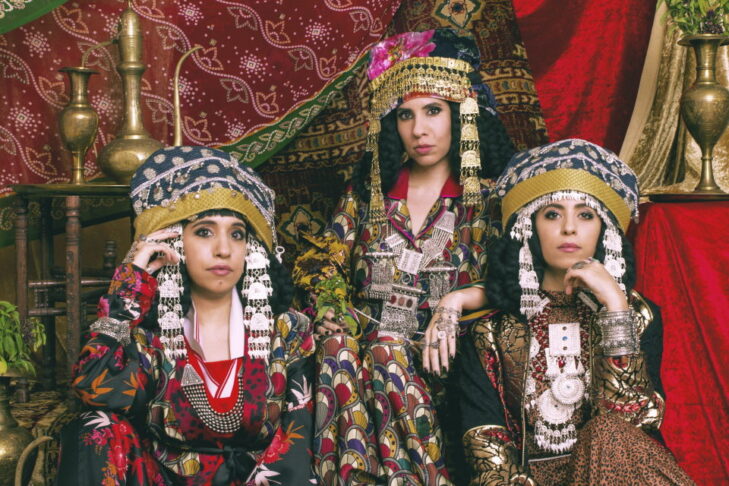 A small but vital musical revolution has been taking place in Israel.

In the last two decades, a small group of Mizrahi Jews—Jews of Middle Eastern and North African descent—have returned to their Arab Jewish roots and begun transforming the country’s popular music scene.

Israeli music, long dominated by Western forms of rock and pop, has been suddenly infused with the musical strains of Arab countries like Morocco, Iraq and Yemen, fusing sounds and rhythms into something thrillingly its own.

These artists’ songs draw on such influences as traditional Andalusian and Arab Jewish melodies, blues, jazz and music from Africa and Latin America. And they often feature Arabic and Hebrew lyrics, sung in a cacophony of Hebrew- and Arab-inflected accents, blurring one language into the other.

In the Middle East, where nationalities and their boundaries are often jealously guarded, this new form of Mizrahi music is all about tearing down cultural and musical walls with meaningful abandon.

The best-known of the Mizrahi artists, like rocker Dudu Tassa, have established careers in Israeli popular music, while others, like singer Neta Elkayam, have forged iconoclastic paths from the beginning. In some cases, the musicians are more popular outside Israel than in it, finding an audience in the Arab Middle East and Europe.

For the most part, the performers are second- and third-generation descendants of Jews from Iraq, Egypt, Morocco and Yemen who arrived in Israel in the decade after the 1948 War of Independence, doubling Israel’s population.

According to Yuval Evri, Brandeis University assistant professor of Near Eastern and Judaic Studies on the Marash and Ocuin Chair in Ottoman, Mizrahi and Sephardic Jewish Studies, Mizrahi Jews received an ambivalent reception in Israel.

On the one hand, he said, they were seen as a fulfillment of Zionist hopes, part of the ingathering of Jews that the founders of Israel had dreamed the creation of a Jewish state would make possible.

At the same time, Evri said, those founders, predominantly Ashkenazi (Eastern Europe) Jews, looked down on the Jews from Arab countries because of their darker skin and their affiliation with Middle Eastern and African culture.

They also carried with them the Arab cultures in which they had lived for centuries—deeply problematic in a country that was still in a state of war with the surrounding Arab states.

To “de-Arabize” these Jews, Evri said, Israelis coined a new term for them, “Mizrahi,” meaning “from the East.” (The term “Sephardi” refers to Jews who moved to North Africa and the Ottoman Empire after their expulsion from Spain in 1492, but the terms are often used interchangeably now.)

The Mizrahim grew up in an Israel whose dominant Ashkenazi culture was rooted in Eastern Europe.

The government wanted these immigrants to assimilate, Evri said, which meant conforming to Ashkenazi cultural norms and suppressing their Arab Jewish roots. But by placing them together, the government ended up reinforcing their sense of cultural identity, Evri said.

These younger generation musicians are now “bent on reclaiming their Arabic roots” he said.

With the arrival of the Mizrahi immigrants in the 1950s, half the country spoke Arabic.

But according to a 2018 report by Sikkuy, an Israeli-based nonprofit, only around 9% of Israeli Jews describe themselves as having knowledge of Arabic. Three years ago, the Israeli parliament downgraded Arabic from an official language of the country to one with “special status.”

“But Arabic is not only the language of where we come from, it’s also one of the historic and current main languages of the land,” said Evri, himself the second-generation son of Iraqi Jews. “If you want to understand Palestine-Israel’s history, geography and culture, Arabic is essential.”

“Generations of European youth have learned English by listening to American and British rock bands. Now there is the chance that young Israelis in the future will turn—or return—to Arabic through this burgeoning new movement,” he added.

The Jewish Experience asked Evri to take us on a guided tour of some of his favorite Mizrachi singers and songs.

Lior Elmaliach, whose family is from Morocco, became popular in the early 2000s and is a forerunner of the Mizrahi music revolution. His songs draw on the piyyutim, Jewish liturgical poems, of Moroccan Rabbi David Buzaglo, considered one of the greatest liturgical poets of the 20th century.

Piyyutim were sung to both traditional and modern Arab melodies by Jews in Arab countries, and the custom continued in Mizrahi synagogues in Israel. Elmaliach recorded piyyutim and brought them to a new popular audience, Evri said.

“There is a saying that in the process of erasing Arab Jewish culture in Israel, they forgot to close the synagogue door,” he said. “It is in the piyyutim that the new tradition of Mizrahi music was born.”

Ziv Yehezkel, “Ya Ribun Alam” (“Praise the Sovereign of the World”)

Growing up, Ziv Yehezkel learned Arabic melodies at his local Mizrahi synagogue. An Orthodox Jew, he has ventured even further in his act of cultural fusion, appearing as the vocal soloist for the Arab Orchestra of Nazareth and becoming a star in both the Arab and Jewish music worlds.

In 2016, he told The Forward, “I live on the borderline” between Jewish and Arab culture. In this song, Evri said, Yehezkel “takes a traditional and beautiful 17th-century piyyut from Syria and brings the Arab and Jewish traditions into a conversation with one another.”

Dudu Tassa describes his music as a mixture of Iraqi, Middle Eastern and Israeli rock music he’s dubbed “Iraq n’ Roll.” “Tassa is personally the closest to me because he sings Iraqi music, which I remember from my home,” Evri said.

Tassa opened the 2017 Coachella festival in California and toured with the band Radiohead. His third album was in part a tribute to his grandfather and great-uncle, popular Jewish Iraqi music stars in the mid-20th century known as the Al-Kuwaiti Brothers, after which he named his current band.

Neta Elkayam grew up in one of the development towns in the country’s south, Netivot, created by the Israeli government to house the influx of Jews from Arab countries. Everything was Moroccan—the food, the synagogue and the music.

Several years ago, she embarked on a project to recover the music sung by Moroccan Jewish women recorded while they were temporarily gathered together in transit camps on their way to Israel in the 1950s.

“Taali” was originally written by the popular 20th-century Algerian singer Salim Halali, who was himself Jewish. Elkayam sings it in Moroccan Arabic. “The first time I heard Neta sing, it was this song,” Evri said. “I was taken with its beauty.”

The band A-Wa (“yes” in Arabic) fuses Arabic traditions and lyrics with hip-hop rhythms to bring Mizrahi music to younger generations. Their song “Habib Galbi” (“Love of My Heart”) was the first song in Arabic to make it to No. 1 on the Israeli pop charts.

“A-Wa is an example of how the new Mizrahi music is remixing Arab and Jewish cultures and subverting national boundaries,” Evri said. The song above is about their grandmother longing for Yemen and complaining about Israel.