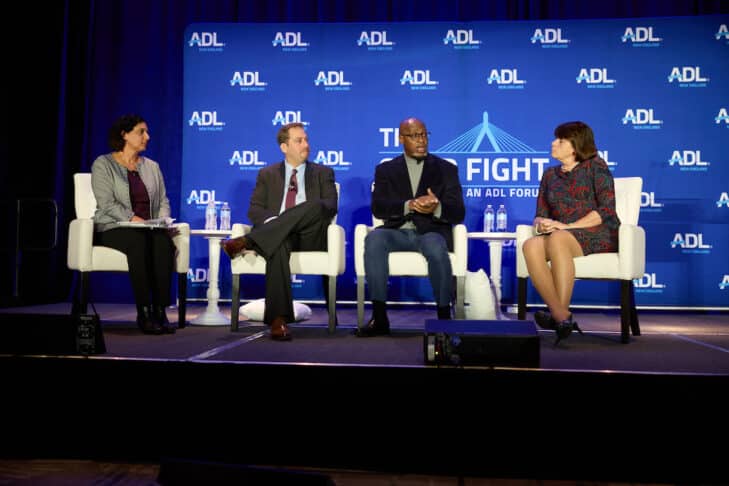 From controversy on college campuses to white supremacist propaganda on freeway overpasses, this year’s The Good Fight: Forum on Confronting Antisemitism Today & Tomorrow addressed antisemitism in New England in multiple ways. Organized by the Anti-Defamation League of New England (ADL) and cosponsored by CJP, the hybrid event brought in nearly 500 people from Greater Boston and beyond.

Shira Ruderman, executive director of the Ruderman Family Foundation, introduced U.S. Rep. Katherine Clark (D-MA), the assistant speaker of the House of Representatives. Clark gave an address that incorporated both the current situation and reflections from a trip to Israel in 2015, when she visited Yad Vashem and saw a disheartening historical artifact—a 1939 letter from Republican senator Robert Taft opposing 20,000 Jewish child refugees from the Holocaust coming to the U.S.

“He sounded familiar themes,” Clark said, quoting Taft’s 1939 letter: “‘The focus has to be on America, American jobs here, what will happen when the children grow up, our economy cannot take in this many refugees.’”

She continued: “Knowing only a small percentage of the children survived the Holocaust, I started to weep. I vowed at the time that if there was a similar situation, I would be like Edith Nourse Rogers,” a congresswoman from Massachusetts who sponsored an ultimately unsuccessful bill to admit the child refugees. 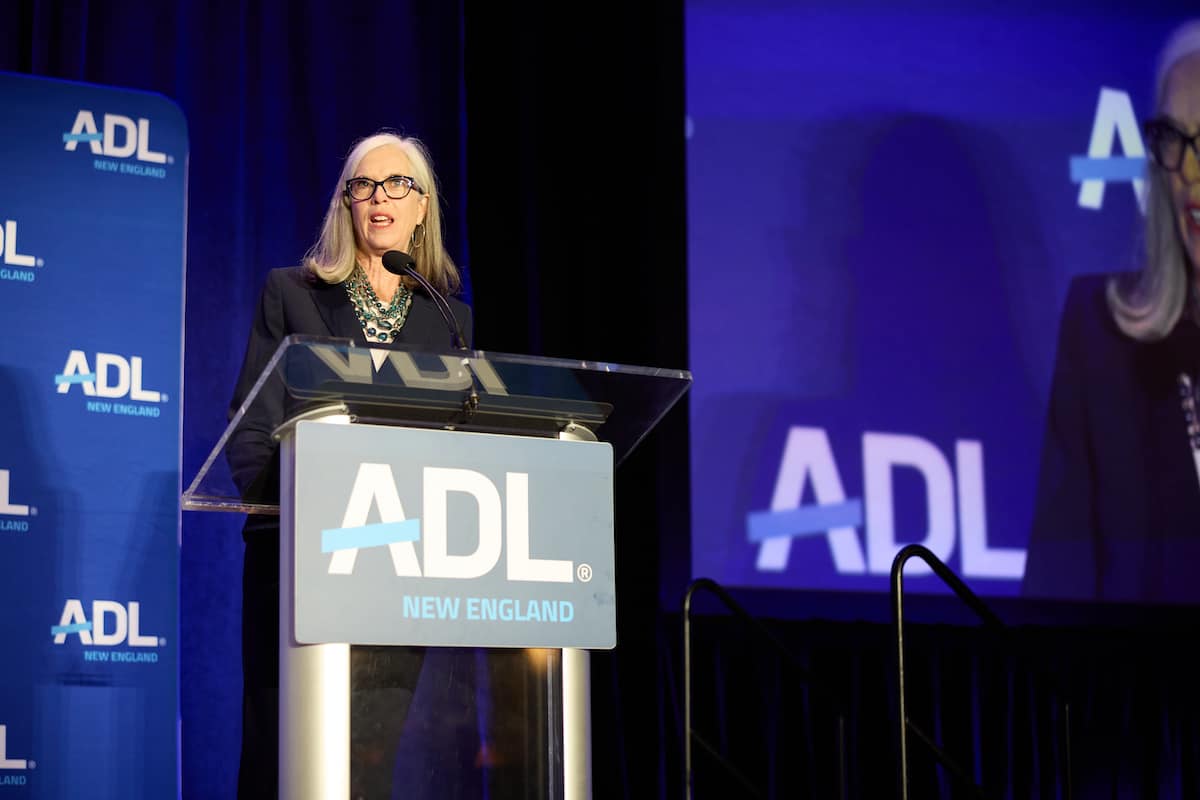 U.S. Representative Katherine Clark, the assistant speaker of the House of Representatives, speaks at The Good Fight on Oct. 30, 2022 (Photo: Jared Charney/ADL)

The Good Fight event was created in the wake of the 2018 mass shooting at the Tree of Life synagogue in Pittsburgh. Eleven people perished in the tragedy, and their names were read aloud, with a moment of silence following, in a somber speech by CJP president and CEO Rabbi Marc Baker.

This year’s event focused on the situation on college campuses, including an opening plenary session with Wellesley College president Dr. Paula Johnson. Her scheduled co-panelist, Harvard College president Lawrence Bacow, could not appear after contracting COVID-19.

In a conversation with Robert Trestan, the director of ADL New England and the vice president of the ADL’s Western Division, Johnson addressed concerns about Jewish life on campus, including a recent survey by the ADL and Hillel International.

“We have a diverse group of Jewish students who come from all over the world, with different perspectives,” Johnson said. “That being said, students taking part in the Hillel-ADL survey are experiencing…a sense that, to many of their peers, Jewish students are a monolith, all form the same opinion. This is a form of discrimination. Students on campus also feel they cannot freely express their Jewish identity. These are the issues that are really worrisome, issues and experiences we really have to counter.” 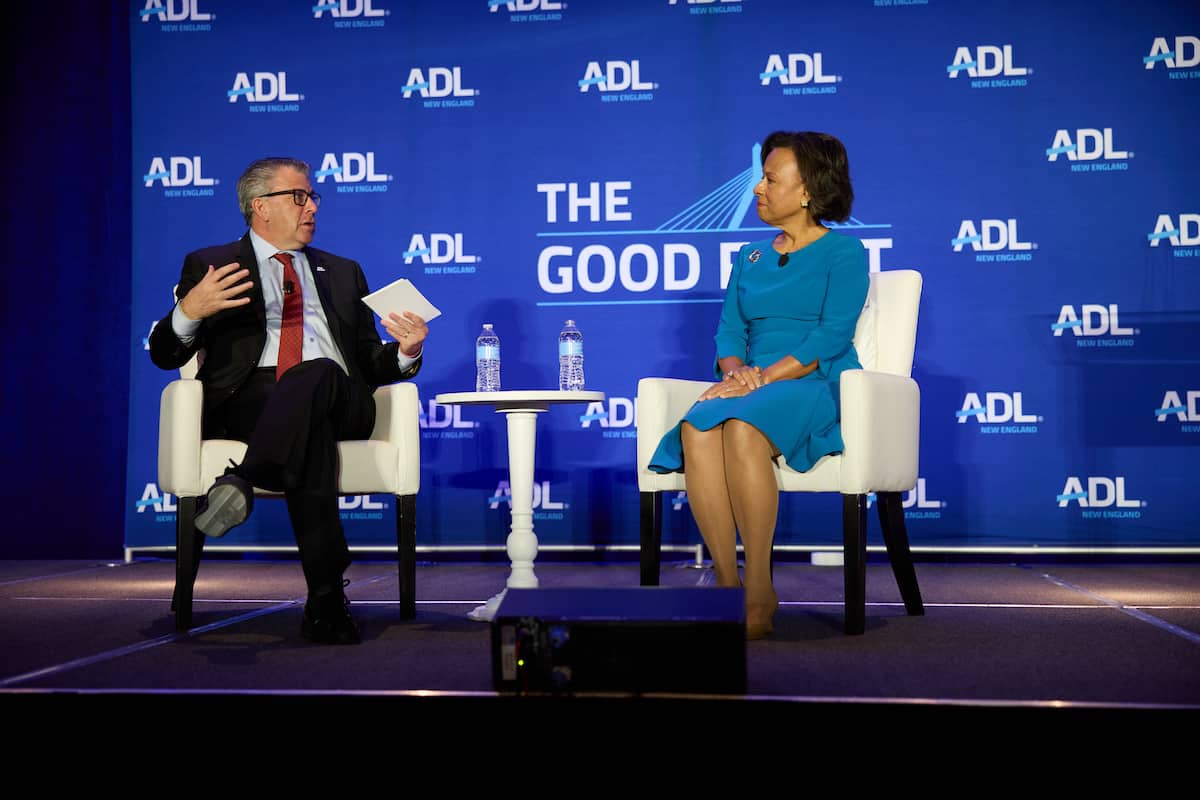 Johnson and Trestan discussed events that took place at Wellesley earlier this fall, related to the Israel-Palestine conflict. A student newspaper, the Wellesley News, published an editorial supporting both the Boycott, Divestment and Sanctions movement and the Mapping Project, an anonymous website that launched this summer, identifying Massachusetts organizations it accused of “complicity in the colonization of Palestine.” Johnson subsequently issued a statement criticizing the paper’s support of the Mapping Project as antisemitic. The News retracted its support of the Mapping Project in a tweet.

“It was very clear to me it was a line that had been crossed,” Johnson said, “with regard to an organization that all of us know that really promotes a certain type of targeting.”

Reflecting on the situation, Johnson said: “This has caused a tremendous controversy on campus—the fact I did say something. It led to calls by the newspaper for an apology from me. We live in the world of social media…I think what I tried to do was use the moment [to show that] words really do have an impact. They have power. They have consequences.”

A course taught at Wellesley, “Palestinian Israeli Peace Prospects,” had drawn criticism on the Mapping Project for its treatment of the situation. Johnson noted that the professor who taught the class, who is Palestinian, will not be teaching it next year.

“By naming this one course, the course at Wellesley that teaches about the conflict, it was meant to suppress a balanced view of this issue,” Johnson said. “Because of that, because of the fact there is fear, she had to change her classroom and take a number of other precautions with the police, FBI, etc.”

Regarding the course not being offered next year, “I think this is the silencing, the infringement on academic freedom,” Johnson said. 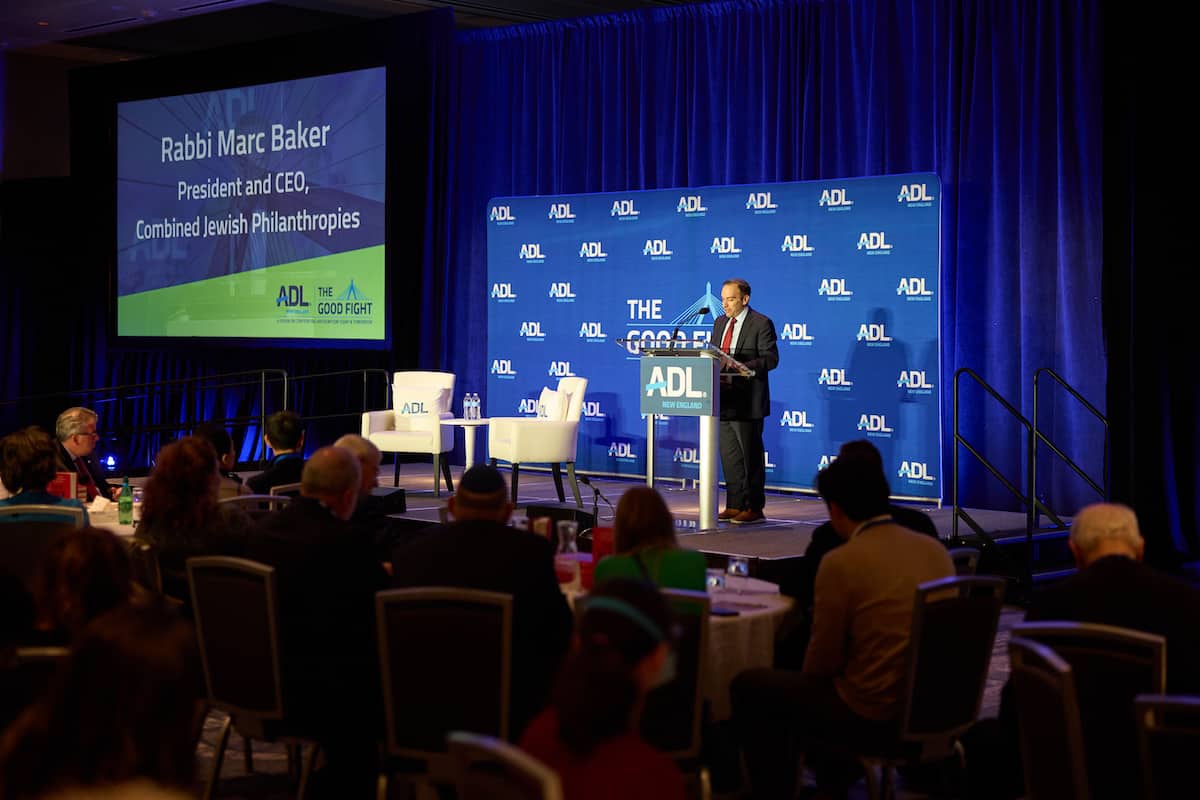 In addition to the situation on college campuses, other topics discussed at the forum included white supremacy in New England. Speakers at the closing plenary—Middlesex District Attorney Marian Ryan, GBH investigative reporter Phillip Martin and ADL vice president of the Center on Extremism Oren Segal—expressed concern over white supremacist activity in the region. This included a publicly displayed banner alleging Jewish responsibility for 9/11 on the 21st anniversary of the terror attacks, and a now-former Woburn police officer accused of assisting with the “Unite the Right” rally in Charlottesville, Virginia, in 2017.

“One of the allegations” against the Woburn officer is that “he was providing information to the organizers of Charlottesville on how to avoid perimeters from law enforcement,” Ryan said.

“The vast majority of law enforcement are honest, hard-working people who do their job,” she said. “You think about the harm that can be done by those small numbers of people in the organization [who try] to get access to training and databases.”

Segal urged people not to underestimate the danger posed by an antisemitic flyer left on their lawn by a white supremacist group.

“An antisemitic letter or racist letter is thrown on your lawn, in front of your house,” he said. “Is there a person in your community who hates [you]?” He added, “We overlook the so-called ‘small stuff’ at our peril.”

Martin lamented a delay in responding to a white supremacist protest at this year’s St. Patrick’s Day parade in Boston. Members of the white supremacist group NSC-131 displayed a sign reading, “Keep Boston Irish.” It took about two hours before there was a counter-protest—in this case, a husband and wife with a banner reading, “These are Nazis.”

People who stand up to bigotry can make a positive impact, Martin noted, citing an example from Franklin, New Hampshire. Miriam Kovacs, a woman of Asian and Jewish descent who lost family members in the Holocaust, contacted him to let him know about people standing up to hate. Kovacs runs a business in Franklin, The Broken Spoon, that has received antisemitic reviews. She mobilized town residents to show their support for tolerance.

“The entire town vowed to oppose bigotry, hatred, antisemitism,” Martin said. “We are taking a stand. It’s part of The Good Fight.”