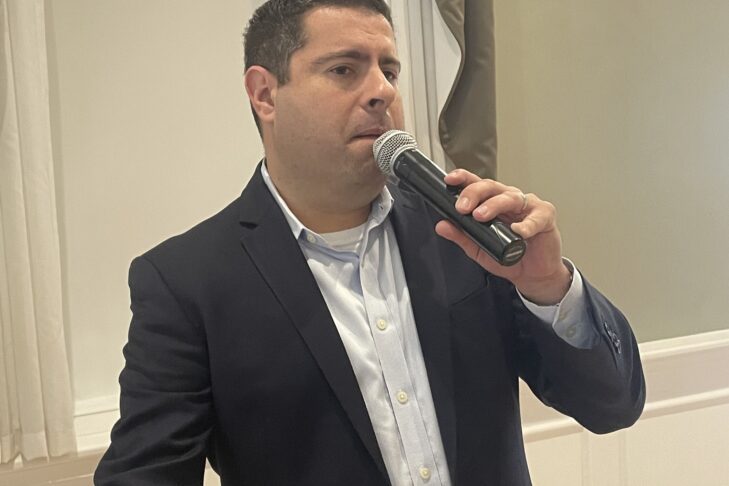 “The New Faces of Antisemitism” was the topic of a talk by Matthew Berger, the new executive director of the Kraft Family Foundation to Combat Antisemitism. On July 19, 90 people came to hear Berger at the Sharon Community Center. The program was sponsored by the Sharon Men’s Club.

Berger works with Robert Kraft and family to monitor and respond to antisemitism in the real world and online. He spent the previous seven years fighting antisemitism on college campuses while working for Hillel International. “We should all be concerned,” said Berger, adding, “In case some students don’t understand what ‘antisemitism’ means, the term ‘Jew hatred’ can be better understood.” He added that Jew hatred is on the rise in the U.S. He pointed out an example from a recent debate on Twitter: “Did Anne Frank have white privilege?”

“What’s happening is as bad as you’ve read and better than you think,” said Berger. “When I graduated 25 years ago, it was a non-issue. Views about Israel and how it fits into the progressive narrative have changed.” He pointed out that there are students who are making Jewish students feel unwelcome. “Twenty-five years ago, Israel was seen as a small democracy surrounded by enemies. Today, with students born after 9/11 and the Second Intifada, having no memory of either, Israel is seen as more powerful than its neighbors and akin to the world’s worst governments.”

“Jewish students are assumed to be pro-Israel and anti-Palestinian,” Berger continued. “For today’s students, it’s, ‘You’re either with us or against us.  You’re progressive if you’re for racial justice, otherwise you’re racist. Either you’re 100% with the Palestinians or you’re a hater.’ When it’s your friends that say these things, it cuts even deeper. And antisemitism has moved to cell phones. This is called ‘keyboard courage.’ It’s easier to say things you would never say in person.”

University administrators are often not responsive to these issues, although they will engage when other minority groups are targeted. “They work to make other groups feel welcome,” explained Berger. “The same does not apply to Jews, who are often isolated, targeted, unwelcome, harassed.”

To paraphrase Charles Dickens, Berger believes that this is also the best of times. “Jewish life is also thriving on campuses. By and large, Jews feel welcome and they form strong communities. When asked where they will send their own kids, they usually name the schools they attend.”

The Jewish world, Berger stated, must enable students to stand up and not live in fear. Hillel works with professors, administrators and diversity staff to end Jew hatred. Berger pointed out that “the Jewish community itself is diverse: 20% are Jews of color, 10% are members of the LGBTQ community and 10% identify as having a disability.” Also, he noted, students don’t have to agree with Israel’s policies, and it’s OK to question the U.S. government, while still supporting both.

Berger observed that Jewish students are often unprepared for how Israel is perceived. “It’s Important to send students to Israel, to connect them before they go to college. The other side is well-prepared. We need to give Jewish students the information they need.” He added that in the last few decades people have changed how they talk about gay people, Asian people, Hispanic people and Black people. The same can be done concerning Jews.

Berger believes that the root of the antisemitism of people in their 20s has a lot to do with what they see on social media and TV. The Kraft Foundation will track the misinformation and share this with colleagues throughout the Jewish world. “Antisemitism moves fast on social media. We need to be on top of it,” concluded Berger. “Russian and Chinese students living in other countries are not attacked for their countries’ policies. Now is the moment for us to speak up.”