“The Orchard” tells the story of a family who, “threatened with foreclosure and the loss of their beloved orchard, face unstoppable, destructive forces that dismantle their lives.” Hecht plays Madame Lyubov Ranevskaya—an engaging landowner to whom other players are drawn. Baryshnikov delivers a captivating performance as Firs, the quiet, compelling elderly servant.

“The production was well received in New York,” Golyak recently told JewishBoston. “The next step was to bring it to our home in Boston and share it with our audience here.”

“The Orchard” lands on Friday, Nov. 4, for a nine-day run at the Paramount at Arts Emerson. Golyak asserted that, “well-known performers such as Hecht and Baryshnikov should be regularly performing in Boston. We have a theatre scene to be proud of here.”

“The Cherry Orchard” was an apt play for Golyak to experiment with during the pandemic. Hecht told JewishBoston that Golyak’s creative additions to the play were “revelatory” for New York audiences. “The changes were dramatic for some people, even scary, for purists.”

Hecht is referring to the play’s two robots, one of which is a 12-foot robot that morphs into one of the play’s characters. According to Hecht, “the large robot is remarkable for its graceful movements. It is equipped with cameras, so we’re filmed multiple times, and our images are projected on the stage’s walls. The robot also has the incredible job of acting as a cinematographer.” She added that “Igor’s understanding of ‘The Cherry Orchard’’s story is deep and earned, resulting in amazing staging.” 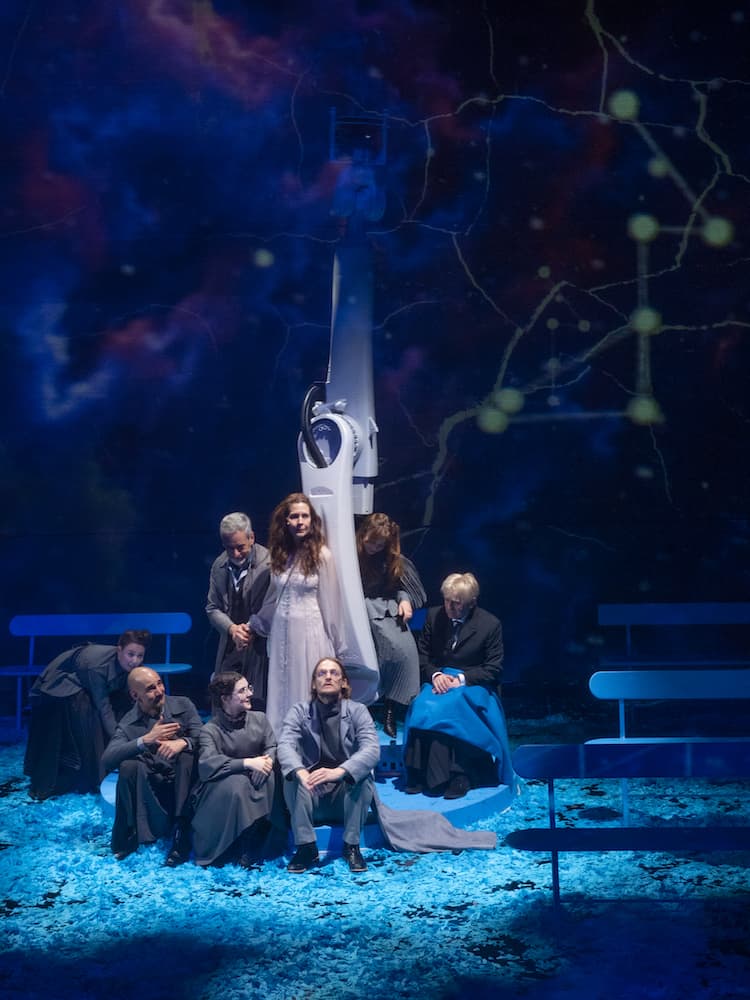 Although the first showings of “The Orchard” were presented virtually, it was not the first time Golyak staged a play remotely. In December 2021, Golyak directed “Witness,” a work based on the tragedy of The St. Louis, a German ship carrying over 900 passengers escaping the Holocaust in 1939. The ship was refused landing rights in Havana and then in the United States, eventually forced to sail back to Hamburg.

Based on the play’s success as a virtual production, Golyak and his collaborators took the bold step of developing a hybrid version of the play. Golyak noted it was important that “‘The Orchard’ conveys a sense of profound loss, and there is nothing they can do to make it better. These characters feel like a small ship in an ocean of misfortune that often happens to human beings. It aligns with what people felt during the pandemic, where there was a similar loss of agency.”

While Baryshnikov’s star power has helped garner press attention and ticket sales, Hecht said: “Misha is the most collaborative, modest performer. He taught us modesty and grace by the way he works. It was the opportunity of a lifetime.” 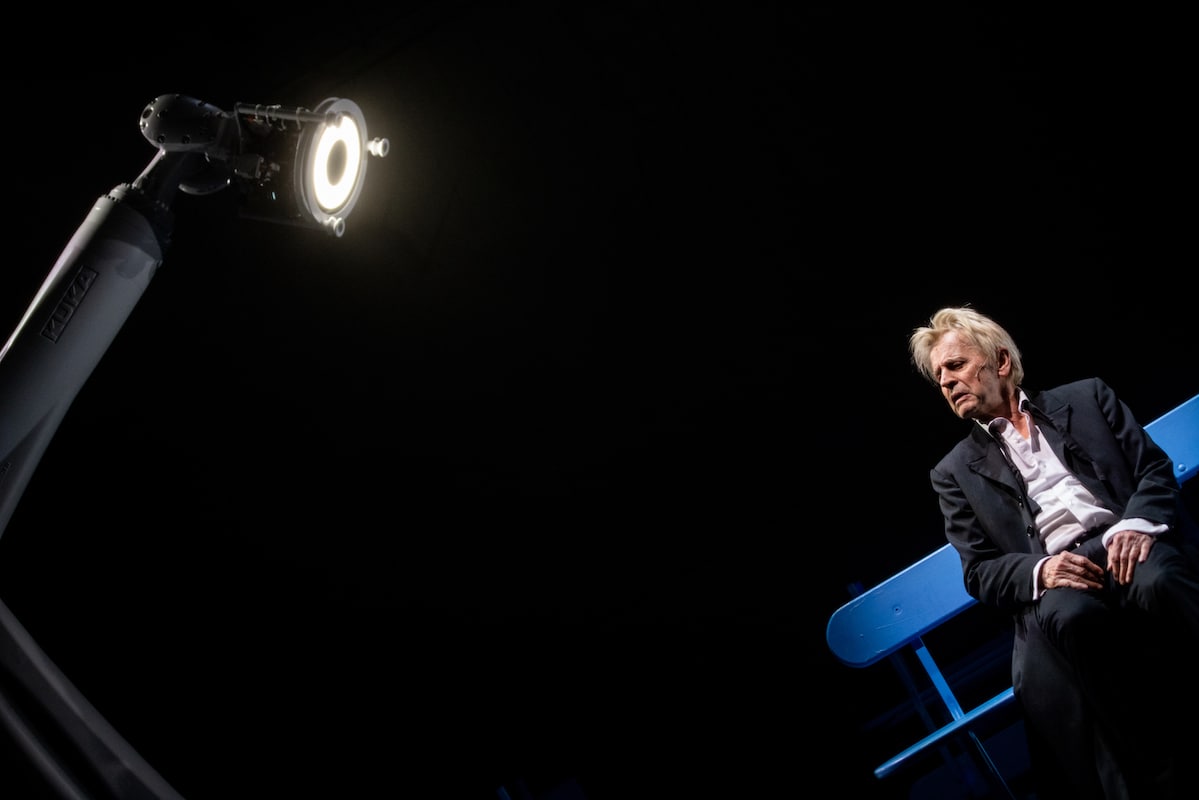 Golyak added that he is grateful to Baryshnikov for “shining some light on a small theatre company outside of Boston. His incredible generosity to be part of this production has been our great fortune.” Additionally, Golyak observed that Hecht’s performance “held the room together as she believed in my vision. She inspired me, and her support helped me guide this process.”

Golyak’s activism on behalf of his fellow Ukrainian artists over the past year has become central to The Arlekin Players’ mission. A native of Ukraine, Golyak founded Arlekin Players Theatre in 2009, recruiting immigrant actors from the former Soviet Union. This past year, he and his company launched Artists for Ukraine, which fundraises for and works with Ukrainian refugees in Moldova.

He met a kindred spirit in Hecht, who has done her own tikkun olam work with migrants through her organization, The Campfire Project, which she founded in 2017. In Igor, she also finds the perfect partner to add to her work with refugees: “Artists that survived a life in the former Soviet Union, particularly Jewish artists, have a defiance in their work that Igor completely understands.”

Hecht, Golyak and members of their respective organizations recently traveled to Moldova together to aid Ukrainian refugees there. They implemented The Campfire Project model, which brings bilingual artists to refugee camps around the world and does what Hecht described as “wellness-based theatre work.”

“And it’s not only theatre,” she said. “It’s also clowning, music and movement, all based on psychological well-being. It incorporates breathing and other ways of helping people to relive their tension—the kind of pathological tension that they carry with them when fleeing their countries.”

Hecht said her work with refugees was first inspired by a cousin who had survived the Holocaust. At eight, he was in a displaced persons camp and recalled being cast in a play. “It was so validating for him. I immediately thought, ‘I can do this kind of work.'” At one time, Hecht taught theatre to underserved youth in Compton. After establishing Campfire, she went on to work with Syrian refugees in Greece.

Golyak said that Artists for Ukraine and The Campfire Project are planning a joint return to Moldova in December. As with the earlier trip, he and Hecht will be accompanied by actor Maura Tierney and a Boston-based music therapist. Additionally, Golyak has also partnered with IsraAid, which will be part of the December trip. Golyak said that IsraAid is working on the ground in Moldova and hopes to open an office in Ukraine by the summer of 2023.

Hecht and Golyak said their work with refugees is among their most important activism. “The idea that someone could be cast out of the country of their birth and so unwelcome in any other place in the world is a certain kind of torture,” said Hecht.

Golyak and Baryshnikov understand the “torture” of displacement all too well.

Get tickets for “The Orchard”