Close
Never miss a great event again!
Get the best Jewish events delivered to your inbox every Thursday with JewishBoston This Week.
By signing up, you agree to our Terms of Use and Privacy Policy.
Sukkot Resources
View all

It’s a fanciful image: a sukkah reaching for the stars atop a New York City skyscraper. But that is what happened in 1972 when philanthropist Jack Weiler placed a sukkah atop the W.R. Grace Building’s 50 stories in midtown Manhattan. He boldly called that installation “Sukkah in the Sky.” In a 1986 American Jewish Historical Society interview, Weiler described his sukkah as a shaar hashamayim—a gateway to the heavens.

Fifty years later, his granddaughter Barbara Litwin, who lives in Boston, recalls attending the first Sukkah in the Sky celebration as a ten-year-old. “It felt magical,” Litwin told JewishBoston. “It evoked real trees and branches and had wonderful light streaming in it. It was just beautiful.”

Weiler loved the Sukkot holiday for its boundless joy. In conceiving Sukkah in the Sky, he provided what Litwin describes as “the perfect storm of philanthropy creating community not only for the Jewish people, but for everyone. It went beyond a fundraiser and became an ecumenical event. Businesspeople, clergy of all stripes, politicians [including several prime ministers from Israel] and a wider diverse community of New Yorkers came together.”

As the 50th anniversary of Sukkah in the Sky was approaching, Litwin thought a celebration of her grandfather’s remarkable project was in order. She identified the Vilna Shul as the location and its executive director Dalit Horn as the ideal partner to create programming for the anniversary. Horn was inspired to run with the idea and realized the Vilna’s vision “to celebrate Jewish culture, heritage and values through arts and entertainment, holiday celebrations and adult learning in a radically welcoming and inclusive space” resonated with the goals of the original Sukkah in the Sky. 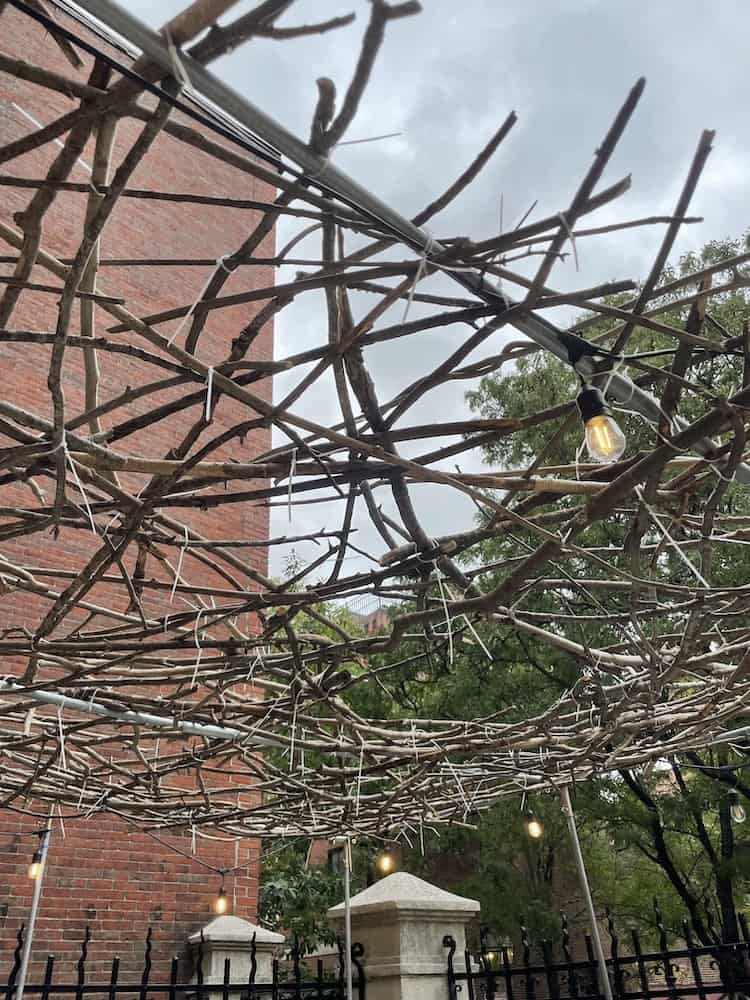 She told JewishBoston that celebrating Sukkah in the Sky’s anniversary “allows us to take seriously the question of how the Vilna—Boston’s center for Jewish culture—can make the Jewish calendar relevant and compelling to people whose joy and connection to their identity and community is more aptly expressed through exhibits, workshops, talks or concerts which draw upon Jewish art, music, history, literature and food.

Horn notes Litwin’s enthusiasm about partnering with the Vilna “turbocharged how it thinks about holiday celebrations through a cultural lens. For example, in New York City, she saw how it made people curious and excited in an entirely different way. And even though this experience is through Sukkot alone, there is so much potential for our community to think about how we make holiday celebrations meaningful, compelling and joyful for the many people in Greater Boston who gravitate toward cultural outlets for Jewish expression and community building.”

Horn’s vision of “turbocharging” the Vilna’s intention of celebrating Jewish holidays through a cultural lens will be set in motion during the upcoming Sukkot holiday. In addition to hosting an exhibition about Sukkah in the Sky, Caron Tabb, a prolific Boston-based mixed media artist, has built a customized sukkah for the Vilna.

“The sukkah is one of the greatest pieces of popup public art in Jewish tradition,” said Horn. “We build and experience life in these tents for eight days and then we take them down until the next year.”

Horn’s apt description of the sukkah as a popup brings up the symbolism of the sukkah as a temporary dwelling and the fragility of life. Tabb described Vilna’s sukkah to JewishBoston as “an impermanent structure, which provides us an opportunity to think of who we are as a community.”

Every aspect of Tabb’s construction of the Vilna’s sukkah encapsulates her commitment to showcasing Jewish values and social justice issues in her work. She calls the sukkah “For a Human is a Tree of the Field,” a quote from Deuteronomy 20:19. Tabb noted: “We human beings reflect our history and the land in which we grew up. For me, it’s physically about the land of Israel, but more metaphorically, it’s about our choices and how they reflect on us. It draws from my immigrant experience and reflects on the meaning and impermanence of home, refuge, and welcoming the stranger.”

Tabb’s dedication to accessing more profound levels of meaning in her art is a hallmark of her work. For the Vilna sukkah, Tabb used neutral and muted palettes to evoke the Cohanim—or priestly garb worn in the ancient temples of Israel. The modern-day image recurs in the white robes that rabbis and cantors wear during the High Holidays. Two 10x10x10 three-walled structures with a walkway between them also innovate the idea of the sukkah. Tabb uses graphite and acrylic paint to depict the seven species indigenous to Israel on the walls. A seventh wall faces out to the street to complete the septet. They include wheat, barley, pomegranates, figs and grapes, all of which the Kabbalah associates with human attributes such as kindness, strength, beauty and perseverance. Additionally, Tabb points out that olives are foundational, which Tabb said, “refers to the Jewish people who when pushed and crushed produces a magical olive oil that Maimonides noted was healthy for body and mind.” Additionally, two panels serving as doors feature Deuteronomy 20:19 in English and Hebrew.

Robust programming also enhances the Vilna’s Sukkot celebration. In addition to the exhibition honoring the 50th anniversary of New York’s “Sukkah in the Sky,” Tabb will be in conversation with the director of Museum of Fine Arts Boston (MFA), Matthew Teitelbaum. Their conversation comes at a time when the MFA is notably expanding their Judaica collection.

Tabb observed: “The MFA’s ongoing efforts to build their Judaica collection comes at a time when the museum understands the centrality of the Jewish community to the vibrancy of Boston’s art scene and life in general. We’ll also talk about this phenomenon in connection to the sukkah.”

Additionally, a jazz night for young professionals will feature Berklee College of Music’s Warren Pettey and his trio, The Connection, along with festive foods and spirits. Small docent-led group tours of the Vilna’s sukkah and the Sukkah in the Sky exhibition will integrate aspects of the Vilna’s year-round tours.

Horn says the week-long festival, “Sukkot on the Hill: Making Something Old, New,” is the first in the Vilna’s holiday series. She expects future holiday programming to present art as “a source of fostering Jewish identity as well as identity formation. The role of art at the Vilna expands on the idea of a Jewish text. And we’re looking at that trend through a cultural lens.”

Find more information about the Vilna Shul’s 5783 Sukkot on the Hill celebration.