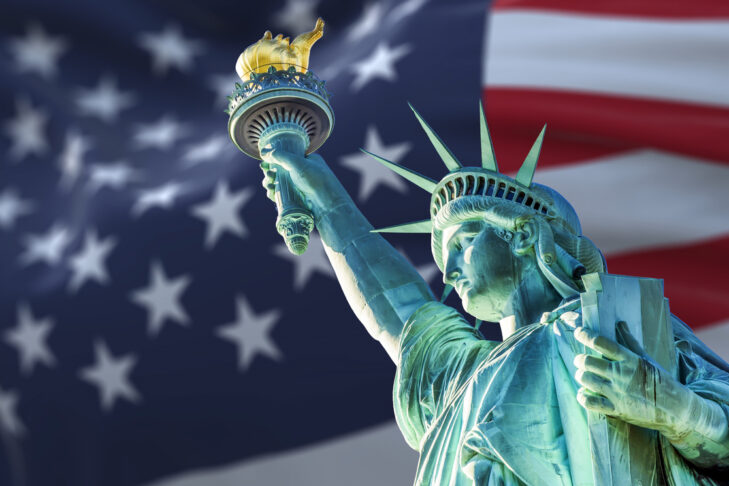 On Monday, July 4, the U.S. celebrated its 246th birthday. It was a chance to reflect that throughout its history, the nation has made many advances against antisemitism, beginning with independence from England and continuing into the modern era.

One early advance had a New England connection. Just 14 years into independence, in August 1790, the new country’s first president, George Washington, penned a reassuring letter to the Touro Synagogue in Newport, Rhode Island. Washington promised that the U.S. government would give “to bigotry no sanction, to persecution no assistance.” He also wrote, “May the children of the stock of Abraham who dwell in this land continue to merit and enjoy the good will of the other inhabitants.”

“I think it’s an important moment,” said Ralph Melnick, a senior lecturer in Judaic studies at the University of Massachusetts at Amherst. “The Jews of Touro essentially wrote to him welcoming him, essentially asking him to make such a statement. When he issued that statement, he copied some of the exact wording of the Jews’ own letter to him.”

Jonathan Sarna, the Joseph H. and Belle R. Braun Professor of American Jewish History at Brandeis University and the director of its Schusterman Center for Israel Studies, sees a key difference from Europe in how the U.S. viewed religious liberty.

“The idea that religious liberty is an inherently natural right had not previously been expressed by a major nation,” Sarna said. “Most of Europe did not believe Jews should get these rights as inherently natural rights,” but rather through a give-and-take process: “Well into the 20th century, there’s a history of rights extended and pulled back, and I think what’s remarkable is that in America it was expressed on the basis of natural rights that could not be taken away.”

Another key moment, from the 19th century, related to the revocation of an order. In December 1862, during the Civil War, Union general Ulysses S. Grant issued a proclamation expelling the Jews, as a class, from the military district he commanded, due to a dispute over smuggling Confederate cotton. When President Abraham Lincoln learned about the order from one of the affected Jews, he reversed it.

Sarna, author of the book “When General Grant Expelled the Jews,” explained the background for Grant’s order: His father was working with Jewish clothing manufacturers in Cincinnati. The elder Grant wanted to smuggle cotton from the Confederates and profit through a deal with the manufacturers. Gen. Grant chose an extreme response.

“Instead of simply punishing the smugglers or expelling a handful, he expelled Jews as a class,” Sarna said. “This was the problem. You lumped everyone together.” He added, “Never in American history, before or afterwards, had so many Jews been told they were expelled out from a territory.”

Sarna credited a Jew from Paducah, Kentucky—which was part of Grant’s district—with acting quickly. This man traveled from Kentucky to Washington, D.C., to meet first with a senator and then with the president.

“Lincoln sees the order and he instantly revokes it,” Sarna said.

Michael Hoberman, a professor of English studies at Fitchburg State University, said that Lincoln “realized that perhaps it was unconstitutional. The issue with the order is that it violated one of the most important principles in the Constitution—people can’t be persecuted, as a class, for the religion they practice.”

“I think there’s plenty of evidence that suggests Lincoln was quite fond of Jews,” Hoberman said, adding that ironically, “evidence suggests later in Grant’s life that he, too, had warm relations with Jews.”

Sarna marshaled extensive examples from Grant’s post-war career. In 1868, when he campaigned successfully for president, he apologized for the wartime order. He had a Jewish advisor, Simon Wolf, and appointed Jews to many positions in government. He donated funds toward the first synagogue in the capital and attended its dedication. At the end of his life, he signed his name to a document criticizing the pogroms in Russia.

When such antisemitic violence erupted in Eastern Europe, the U.S. extended a hand in refuge, reflected by the Statue of Liberty and its accompanying poem, “The New Colossus,” by American Jew Emma Lazarus, with the line, “Give me your tired, your poor/Your huddled masses yearning to breathe free.”

“I think what you find is that initially, when there were reports of atrocities against Jews, there was a great deal of sympathy in America, much as there is now toward Ukraine or there was toward Syria,” Sarna said.

He expressed caveats, however, noting that a few decades later, the policy was reversed with the 1924 Johnson-Reed act, which limited Jewish immigration by 90%.

“As Jews came in larger numbers, some of the sympathy abated,” Sarna said. “That’s the way it is often in American history.”

Although American history has sometimes been unkind, the U.S. remains a country guaranteeing freedom of worship, where every July 4, fireworks explode over the statue to which Lazarus dedicated her poem.

“I think there’s much to celebrate,” Sarna said, although he added that a lesson for July 4 is that “we not take for granted those rights” of religious freedom. “I think the lesson of the laws in the last decades is that you need to be vigilant and continue to fight for your rights.”