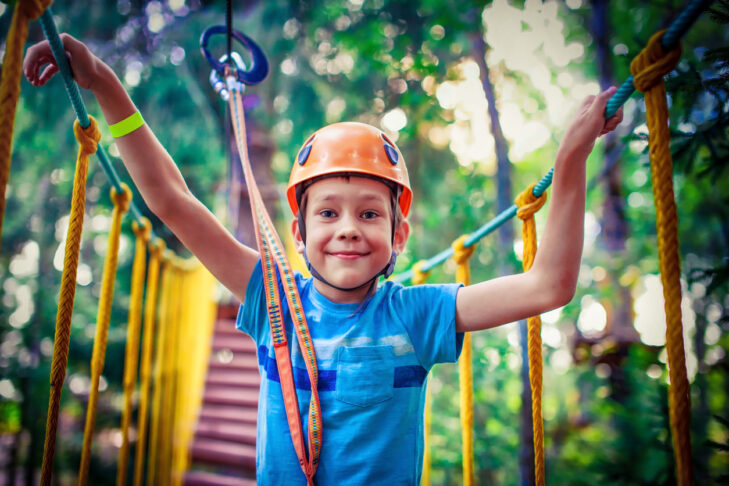 For years, my fifth grader was resistant to the idea of sleep-away camp. Frankly, I didn’t want to send him, either. He was too young. Too cautious. And I’d miss him!

Sleep-away camp also holds a troubled place in my family’s history. My uncle died at sleep-away camp in the early 1950s, shortly after his bar mitzvah. He dove from a raft and drowned. (My second son is named for him.)

It was a totally freak accident that had nothing to do with the camp, but buried deep in my psyche was the fear that Bad Things Could Happen If You Go Away.

Happily, it’s now 2021. Camps definitely have far more oversight than they did back then, and anyway, my son is very eager to go to sleep-away camp after several summers doing nearby sports and day camps. (Watching Disney’s “Bunk’d” has helped.) When I brought up the idea to him, he actually wanted to look at view books and know how many kids would be in his cabin.

At first, I wasn’t considering Jewish camps at all. It felt like a cheat, since he doesn’t go to Jewish day school, and my family is pretty laidback about organized religion overall. Would he be an interloper? Would I? Would he feel left out or somehow less than?

But the idea of having some kind of spirituality infused into his experience also seemed grounding and comforting, in a way. For years, my mom’s family was the driving force for us; when she died, I began to dive deeper into the other side of my family, the Jewish side. My cousin and her family, whom I see often, are Jewish, as is my father, whom I see daily; my brother celebrates his Judaism (and his girlfriend also comes from an interfaith family). My kids should be exposed to it, too, somehow, and preferably in a way that feels recreational and natural.

And after interviewing parents for our summer camp series, I was basically astounded at how passionate people are about their favorite Jewish camps. These people are not paid employees, just families I surveyed across the area.

I honestly didn’t expect this level of loyalty. I was anticipating smiley reviews about, like, a good tennis instructor or a clean cabin. Instead, I have received literally hundreds of messages about how much camp has changed people’s lives, from becoming a sanctuary from their school identity, to offering a sense of spiritual grounding (yes, even for those who don’t attend Jewish day school or who are mixed faith!), to creating lifelong friendships and cultivating a sense of deeper belonging.

I’m sure mainstream camps can do that, too, but the fierce allegiance to some of these Jewish camps was enormously, truly eye-opening for me. I’d love my son to feel that strongly about something, anything, besides Minecraft and baseball.

So I’m adding a few Jewish camps to my list. I’d love to know: Is 11 too young for sleep-away camp? How will I find the right fit? Fellow interfaith families: What are your thoughts? Seems like now’s definitely the time to start applying, so wish me luck!