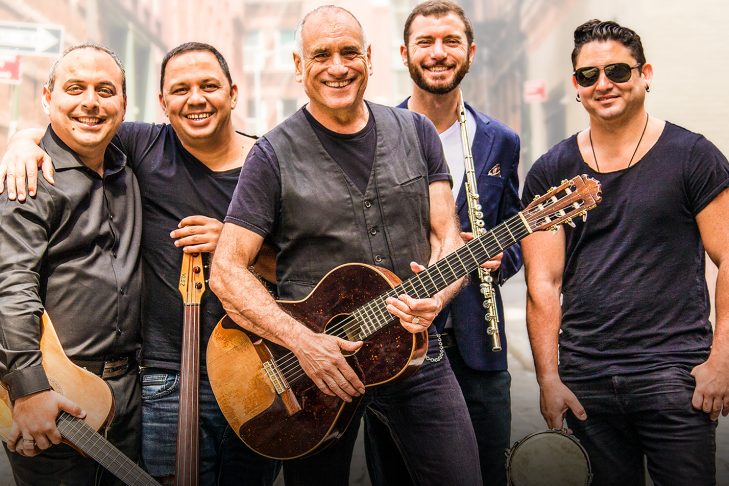 This December, Ohabei Shalom hosts an exciting and exhilarating concert as we welcome Israeli superstar David Broza and New York-based Cuban Trio Havana, led by flute virtuoso Itai Kriss. Join us for the concert and stay for a reception afterward!

In the summer of 2018, David Broza was joined by the New York-based Cuban Trio Havana. This union of musicians led to the creation of his newest band under the label David Broza & Friends. Together, they bring a unique interpretation to the full spectrum of Broza’s rich repertoire of hits.

Israeli superstar David Broza is considered one of the world’s most dynamic and vibrant performers. From his whirlwind fingerpicking to flamenco percussion and rhythms to a signature rock-and-roll sound, Broza’s charismatic and energetic performances have delighted audiences throughout the world.

Raised in Israel, Spain and England, Broza has performed worldwide since 1977, when his hit song “Yihye Tov” first hit the airwaves, promoting a message of peace. Broza is known for his commitment and dedication to several humanitarian projects, especially a resolution to Israeli-Palestinian conflict through dialogue, culture, music and tolerance. Now, with a string of multiplatinum albums—in Hebrew, English and Spanish—he continues to hone his message.

Broza was awarded a Spanish Medal of Honor by the king of Spain, Juan Carlos I, for his longtime contribution to Israel-Spain relations and his promotion of tolerance. A passionate peace advocate, he has also been named a UNICEF Goodwill Ambassador. Broza garnered widespread acclaim for his 2013 album “East Jerusalem West Jerusalem,” produced by Grammy Award-winner Steve Earle and record executive Steve Greenberg.