This year, to put it mildly, was kind of a lot to deal with. I went through a painful divorce, first in civil court and then in Jewish court. I started online dating, which has been the source of moments of pure comedy gold and moments of mortifying existential anguish. And that was just in my personal life! On a global level, dreadful events kept piling on. The president is still the president. Our mishpacha in Israel are faced with a third round of elections in 12 months, on top of everything else they deal with on a regular basis. Jews and our fellow ethnic and religious minority groups are being violently attacked in America and around the world. Oh, and the Amazon burned.

To insulate my mental health against these cumulative horrors, I briefly sought distraction in TikTok, only to come to the soul-crushing realization that as a millennial, I’m too old and decrepit for TikTok. Baby Yoda helped, but not enough. As the proverbial straw that broke the camel’s back, my favorite thing in the entire world, “Game of Thrones,” came to a heartbreaking end from which I’ll never recover. #DaenerysForever. (Don’t @ me, Stark loyalists.) So how did I survive this particularly exhausting orbit around the sun? By living vicariously through the actions of five remarkable Jews who inspired me in 2019. In the dark of January and the depths of depression, I stumbled across the Twitter account of all-star musher, adventurer and author Blair Braverman, a young Jewish woman who was training to take part in the legendary and dangerous Iditarod dog sled race. I obsessed over her delightful biographies of each of the 20 dogs training for the race. All of her dogs are amazing (lookin’ at you, Boo) and all of them, with the exception of Colbert (named after noted Catholic Stephen Colbert), are Jewish.

In March, Blair became the second Jewish woman ever to finish the Iditarod. My appreciation for her only grew from there, and I’m now a proud member of her fan club #UglyDogs. I read her memoir, “Welcome to the Goddamn Ice Cube: Chasing Fear and Finding Home in the Great White North,” in which Blair eloquently discusses her love of the north, the healing power of dogs and her survival of sexual violence that resonated with me on a deep level. She also talks in her writing about being the only Jew in some of the places she’s been to, including rural Norway, and in the part of northern Wisconsin where she lives.

Blair uses her mushing to help bring positivity to the world, like delivering holiday cards via dog sled. Just this past week, Blair posted some remarkable images of her dogs wearing candles on their heads in celebration of Hanukkah. Check out the video below about Blair, her canine crew and her good deeds for her community. Mazel tov to Blair and her marvelous team of doggos for melting the iceberg that was my heart in 2019! Last year, comedian Tiffany Haddish made my list. And here she is again, because she’s done THE MOST for Jewish pride in 2019. This December, Tiffany celebrated her 40th birthday, and with it, her bat mitzvah. Her rabbi was Sarah Silverman’s sister, Rabbi Susan Silverman. Billy Crystal had an aliyah. If these photos of Tiffany holding a Torah and saying the Shema don’t make you cry with nachas, please go to an ophthalmologist immediately, as your tear ducts are malfunctioning. The same day she celebrated her bat mitzvah milestone, Tiffany also dropped her new Netflix special “Black Mitzvah,” which opens with her singing “Hava Nagilah.” (Watch the trailer below.)

I could go on and on about how happy Tiffany’s love of Judaism makes me, but I shall defer to noted Holocaust historian Deborah Lipstadt, who recently wrote: “At a time when our focus is on the ‘oy’ of Jewish life and not the ‘joy,’ along comes a rising star who also happens to be funny, smart, and a person of color, and says, ‘I am a member of this tribe. I want to embrace it, celebrate it, and proclaim it to the world.’ …Thank you, Tiffany Haddish, for reminding so many Jews what a precious legacy we share. Thank you for seeing the darchei noam, the pleasant ways of our heritage, and wanting to proclaim that to the world.” Tiffany, you are here to teach, and we are here to learn! Twitter is a truly vile place for Jews (well, for anybody, really), and yet there are a few Tribespeeps out there doing Hashem’s work in combating the Twitterverse’s worst offenders. One of my favorites is journalist Yair Rosenberg, senior writer at Tablet Magazine. Yair uses his platform to draw attention to and explain vital issues, like the institutional antisemitism of Jeremy Corbyn’s Labour party, the ongoing antisemitic assaults taking place in New York against visibly Jewish people and the burgeoning trend of faux-Jewish impersonation accounts.

Yair snarkily lampooned “vast Jewish conspiracy” tropes by inviting the Jews of Twitter to commence the “Jew Coup” during Christmas, and reminded us to “report to 4chanukah for debriefing.” He deftly skewers stupidity, from the face-palm idiocy of CODEPINK to folks who automatically retweet viral misinformation about Israel. As Yair says in his pinned tweet: “Twitter makes possible so many things we couldn’t do before. Like trolling the Nazis.” Yair, is there a bracha for trolling Nazis? If so, I’d like to say amen. 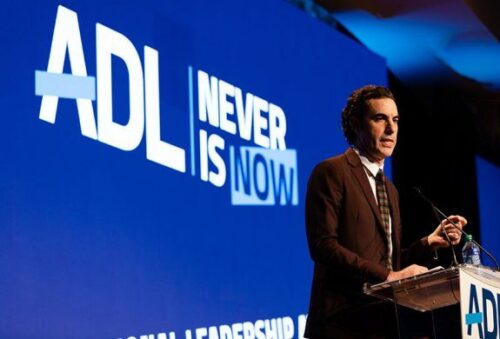 2019 was the year Sacha Baron Cohen shed his cringe-inducing satirist characters of Borat, Bruno, Ali G and Erran Morad to take on the dramatic role of real-life Israeli spy and hero Eli Cohen. In “The Spy,” a six-part Netflix miniseries about Eli Cohen’s story, Sacha absolutely floored me with his acting abilities and dedication to the role. (Sacha’s wife, the hilarious Isla Fisher, shared Sacha’s physical preparations for the part. Ahem.)

I wasn’t the only impressed viewer—Sacha was nominated for a Golden Globe for his work. But what was even MORE inspiring about Sacha this year was his dedication to fighting antisemitism while just being…himself. He spoke out on social media, taking on Mark Zuckerberg and others for tolerating hate speech and misleading political ads on social platforms, and wrote about the same topic in an op-ed for The Washington Post.

Sacha was also the recipient of the Anti-Defamation League’s International Leadership Award and delivered a blistering keynote address at the ADL’s Never Is Now Summit in his real British accent, in which he verbally eviscerated Zuckerburg for his policies and for his hideous haircut. Watch this video and you’ll never view Sacha, or Facebook, the same way again. Baruch hashem for Sacha’s acting—and activism! Taika Waititi was on my 2017 edition of this list, in which I named him “Nature’s Antidepressant.” Now, I dub this magnificent Polynesian Jewish multi-talented genius “my personal Eliyahu HaNavi,” showing up in my life whenever I had need of him (which was always, so he showed up quite a lot this year). In 2019, he reprised his role as Korg in “Avengers: Endgame,” a little indie film you may have heard of. He directed the Nazi-mocking absurdist satire “Jojo Rabbit,” in which he also played an imaginary, disempowered version of Hitler. He popped up in the American TV adaptation of his 2014 mockumentary “What We Do in the Shadows.” Then, watching the first episode of the Disney+ “Star Wars” series “The Mandalorian,” I said to myself, “Huh, that droid sounds a lot like Taika.” Because it was Taika playing assassin/nanny droid IG-11! (He also directed the season finale of the show.)

Shortly thereafter, I was watching an episode of “Rick and Morty” and my ears picked up Taika again, this time as an alien who just really wanted to develop an app. Identifying his soft-spoken New Zealand voice is now my superpower. Watch the video below of Taika explaining why he needed to make “Jojo Rabbit,” what he hoped to achieve from the film and the importance of Holocaust education. Taika, may your acting, directing, writing skills and fashion choices continue to sustain us during our time of need.