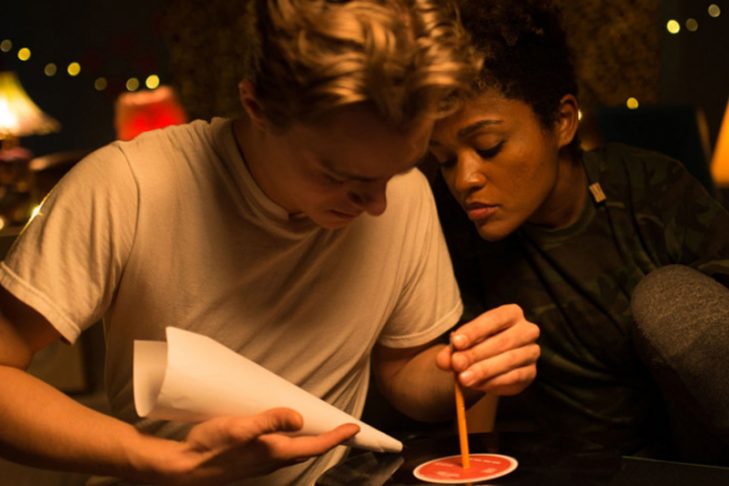 “Give Me Liberty” (Promotional still)

Boston Jewish Film presents an eclectic collection of films for its 2019 Summer Cinematheque.

Bryon Widner is a white supremacist, a hardcore skinhead who proudly wears his convictions on his tattooed body and face. However, there comes a day when his visage does not match his soul. Bryon has fallen in love with a woman who has three little girls who show him the power of love and family. Widner’s story is the inspiration for Israeli director Guy Nattiv’s new film “Skin.”

“Skin” is often harrowing and violent. The film, framed in the present, shows Widner undergoing a series of painful procedures to remove the many tattoos he has accumulated on his face. In an extensive series of flashbacks, the audience learns how Widner’s gang, the Vinlanders Social Club, took him in after he ran away at 14 from his alcoholic, abusive parents.

Widner comes under the spell of the Vinlanders’ charismatic leader Fred Krager and his wife, Shareen, who insists that every new recruit call her “Mom.” The Kragers have created an island of misfit boys in rural Ohio (and most of them are boys, with a few exceptions), whose anger and frustration lead to horrific acts of violence. They randomly beat up people of color and, in one, scene burn down a mosque. Daryle Jenkins, an African-American anti-fascist activist, sees sparks of Widner’s humanity during a march and is determined to “turn” him.

This is an auspicious time for a film like “Skin.” Neo-Nazis, white supremacists and all manner of haters have not only been increasingly active, but are emboldened to peddle their ideologies publicly and proudly. These circumstances put “Skin” in a position to alert a wide audience.

It’s rare to find humor in the Palestinian-Israeli conflict. However, “Tel Aviv on Fire” is a comedy that does exactly that. The film unfolds on the set of a Palestinian soap opera of the same name filmed in present-day Ramallah. “Tel Aviv on Fire” the soap is a kitschy, heavily plotted spy story, taking place in the days leading up to the Six-Day War. Manal, a Palestinian, goes undercover as Rachel, the owner of an Israeli bakery who is ordered to seduce an Israeli general named Yehuda.

All of Israel, on both sides of the divider, is enthralled with the story. To keep the Israelis watching and distracted from the anti-Zionist plot line, the producer has hired his nebbish nephew Salam as a Hebrew diction coach for the Palestinian actors. Salam is a genial guy who lives in Jerusalem with his mother and commutes to Ramallah every day for work. Through a series of convoluted plot twists, he gets himself promoted to be one of the show’s writers.

One night on his way back to Jerusalem, the border patrol stops him. He’s brought to Assi, the security officer who learns that Salam is a writer for “Tel Aviv on Fire,” his wife’s favorite show. Although Assi considers the series anti-Israel drivel, he wants to curry favor with his wife by telling her what will happen before the show airs.

Salam and Assi become unlikely co-writers for the show. Both push their agendas; Assi wants Rachel to fall in love with the Israeli general, which puts Salam in the impossible position of creating Israeli soldiers as romantic heroes. While this is a fun send-up of soap operas and even the conflict, the film also aims to show the pressures of daily life for Palestinians crossing into Israel proper.

“Back to the Fatherland”

“Back to the Fatherland” (Promotional still)

In this touching documentary, filmmakers Kat Rohrer and Gil Levanon have interviewed young Israelis who have moved to Germany and Austria where their grandparents are from. To achieve balance, the duo has also featured the Israeli grandparents who fled those countries during the Holocaust.

Rohrer and Levanon have a stake in the subject and appear often on screen. Rohrer is from Austria and the granddaughter of a Nazi officer. Levanon is an Israeli and the granddaughter of a Holocaust survivor. While this may be a set up for inevitable conflict, Rohrer and Levanon have captured poignant intergenerational moments. Levanon’s grandfather is against her plan to move to Germany, and there are several vigorous exchanges between the two. Two other Israelis—Dan is a sculptor living in Berlin and Guy a BMW employee based in Austria—have deep discussions with their grandparents about their choices to live in these German-speaking countries.

Dan meets his nonagenarian grandmother, Lea, in her hometown of Vienna. The visit is not as gut-wrenching as Lea had expected. In contrast, Guy’s visit with his grandfather, Uri, in Vienna, the place of his birth, is much more difficult.

Rohr and Levanon do a lot of soul-searching. Both agree that in their roles as the “third post-Holocaust generation,” they have made this film for subsequent generations who will never meet a Holocaust survivor in person.

In the film’s final scene, Rohrer and Levanon train their camera on the Nazi uniform Rohrer’s grandfather once wore. The nondescript attic in which they have found the uniform is an eerie backdrop to highlight how average people can make devastating decisions.

“Give Me Liberty” (Promotional still)

“Give Me Liberty,” a dramedy from writer-director Kirill Mikhanovsky, was a surprise hit at the Sundance Film Festival last spring. Mikhanovsky’s inspiration for the film was his early immigrant experience as a medical transport driver in Milwaukee. Among the film’s many pleasures is how Mikhanovsky shows the humanity of marginalized communities.

Vic is a young Russian-American medical transport driver who tries to stay on schedule. But his grandfather almost always makes him late. On this particular morning, Vic is trying to dress his difficult grandpa and feed him breakfast. The elderly man has to catch a bus with other émigré friends for his friend Lilya’s funeral. Grandpa, however, is easily distracted. At one point in this chaotic morning, he almost burns down his apartment building when he attempts to cook a whole chicken.

As he does every morning, Vic is headed to the Eisenhower Center with his disabled passengers. There is a blind, obese man who constantly complains. Along for the ride is also an Elvis fan who sweetly yet obsessively practices singing her rendition of “Rock Around the Clock” for the center’s talent show later that day.

It comes as no surprise that Lilya’s friends miss the bus to her funeral and press Vic to take them to the cemetery. On the way, this motley group encounters a protest as they pick up Tracy, a young African-American woman with ALS who uses a motorized wheelchair. Tracy scolds Vic for his tardiness, but she’s a shining star who easily makes friends with the elderly Russian émigrés crammed on board with her.

Vic’s boss/dispatcher constantly threatens to fire him. In response, Vic’s ongoing refrain is that he is 10 minutes away from any given destination. Then there is Dima, a boxer and scammer who claims to be Lilya’s nephew. He also climbs aboard for a ride in Vic’s van. But Vic’s day is just getting started when his mother pleads with him to move a sofa from her apartment so she can host an opera recital that same evening.

Sound exhausting? It is. But there’s so much comedic gold and poignant drama to be mined in this gem of a film that audiences will happily go along for the chaotic ride.