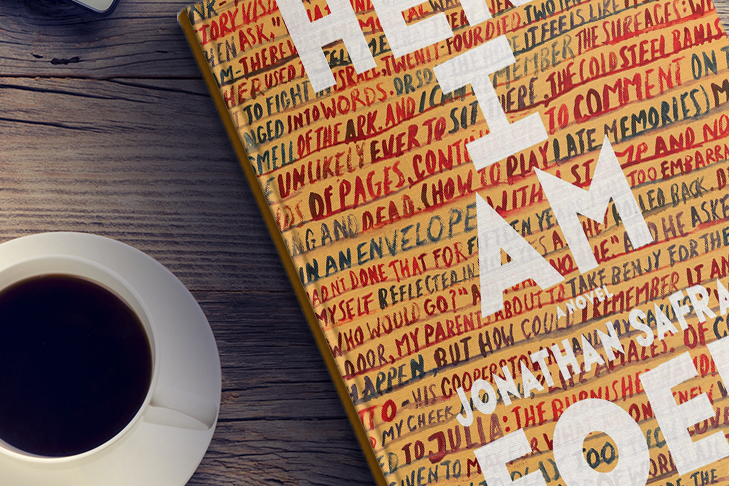 A great book fosters eclectic conversations and lays the foundation for a memorable community experience. Those are the main objectives driving CJP’s new learning initiative, “Read On: One City. One Book. A Million Conversations.” The program’s inaugural selection, Jonathan Safran Foer’s novel, “Here I Am,” is certain to inspire deep and animated discussions about subjects that tackle Jewish observance, Zionism and even fidelity to family and country. “Here I Am” is also Abraham’s response to God just before the binding of Isaac, and it appears to be Safran Foer’s declaration that after 11 years he is back with his most ambitious novel to date.

The nearly 600-page book covers the travails of four generations of the Bloch family. Jacob Bloch, the main protagonist, is a frustrated novelist turned television writer. With just one literary award-winning novel to his credit written in his 20s, Jacob is afraid of becoming a one-hit literary wonder in his 40s. Julia, his wife, is equally frustrated in her work as an architect. Instead of designing buildings, she is overseeing home renovations. The couple has three precocious sons, the eldest of which has sabotaged his bar mitzvah with an alarming stunt in Hebrew school. Within this sprawling narrative is the collapse of Jacob and Julia’s marriage, followed by a cataclysmic earthquake that destroys Israel.

Bearing in mind the energy emanating from “Here I Am,” Laura Baum, associate vice president of CJP’s Jewish Learning and Engagement Commission, says the book is one that “has a diversity of topics that will lead to robust conversations. It has everything from family dynamics, marriage and divorce to Judaism, life-cycle events and themes centered on Israel. It is a very human book that people can relate to.”

To Baum’s point, The New York Times described the book as “a state-of-the-Jewish-soul novel and running below it, like a headline news ticker, is a plausible dystopian nightmare.”

Elyse Winick, CJP’s director of adult learning, will be blogging biweekly about each of the book’s eight sections, leading up to a program featuring Safran Foer in Boston on Thursday, April 26. Of her blog entries, Winick says: “I’ll be focusing on the various themes that come out of those eight sections and providing a glossary of terms to learn more about Jewish references that aren’t necessarily familiar to everyone. Accessibility to the book is very important.”

Winick adds that just from the title “you immediately get a sense that this is a tale of identity. Even if we haven’t walked the same paths that Jacob walks in the book, we certainly are each in this place of grappling with what it means to be present and how our identities are defined. I think it’s going to be very powerful for people to be engaged in conversation about that central core issue.”

Conversation, and its attendant notion of community, are watchwords for “Read On.”  The idea for the program, says Baum, “came from a place of wanting to bring the community together around learning.” With its myriad connections to Jewish organizations that include schools and synagogues, CJP was the ideal incubator for “Read On.” Baum also sees the project as part of CJP’s mandate to bring the Jewish community together. “‘Read On’ is consistent with how CJP president Barry Shrage has always related to the Jewish community,” she says. “He keeps a closetful of books that he shares with people. ‘Read On’ is a continuation of that. We’ve also seen the power of books for young families through PJ Library.”

Baum says that initiating both formal and informal book gatherings reflects CJP’s larger strategy of expanding adult learning. “Read On” also represents a concerted effort to offer learning opportunities that are more conducive to busy schedules. She cites Me’ah, CJP’s signature program of 100 hours of learning over the course of two years, as its anchor program. But she also points out that, “CJP recognizes that people can’t always make that kind of commitment. With ‘Read On,’ people can do this in their homes, with their friends, online or even listen to the book on the go.”

Baum and Winick are still finalizing the details for the April 26 evening with Safran Foer. “Whatever the evening looks like, whether or not we’ll have a moderated discussion or a reading, there will be an opportunity for an extensive Q&A,” says Baum. The two also anticipate that “Read On” will become an annual event. “We’re even open to the possibility of picking more than one book a year in different genres,” she says. “We’re hoping to increase our outreach through literary conversations and literary events.”

“Here I Am” is sure to be a notable start toward that goal. As The New York Times offered, “‘Here I Am’ at its best is a reminder that, as [Philip] Roth once put it, ‘It isn’t what it’s talking about that makes a book Jewish—it’s that the book won’t shut up.’”