Close
Never miss a great event again!
Get the best Jewish events delivered to your inbox every Thursday with JewishBoston This Week.
By signing up, you agree to our Terms of Use and Privacy Policy.
Other Holidays
View all 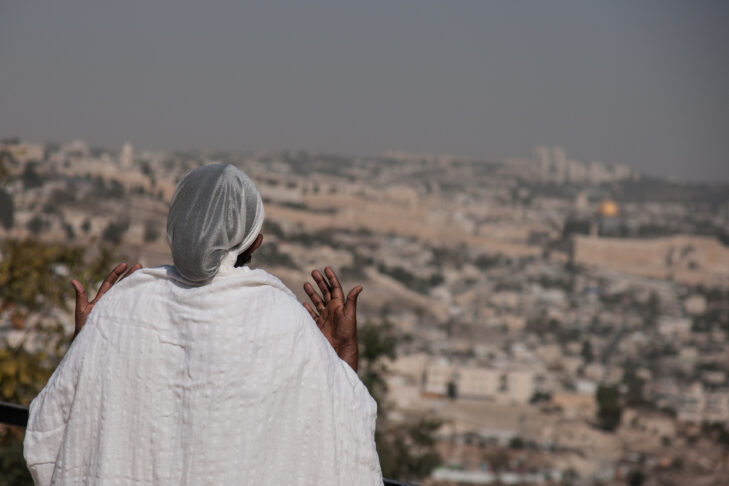 The annual Sigd holiday is one of the many unique religious traditions developed and preserved by the Jews of Ethiopia (the Beta Israel/House of Israel). Occurring 50 days after Yom Kippur, on the 29th of the Hebrew month of Cheshvan, it fell on Nov. 4 this year.

Since 2008, the Sigd has been an official Israeli state holiday, though it continues to be celebrated mainly by the country’s Jewish community from Ethiopia, which numbers about 140,000.

The Beta Israel’s religious leadership believes that the Sigd is a gift its community can share with other Jews, and hopes more Jews will learn about and celebrate the holiday.

According to Qes Semai Elias, the director of the council of kohanim of the Ethiopian Jews in Israel, the organization that represents the priests who are the traditional religious leaders of Jews from Ethiopia, their “next ambition in connection with the holiday is to claim a worthy place for it among the Jewish holidays of the Hebrew calendar, and to thus impart to the month of Marcheshvan, which is otherwise devoid of holidays, our own festive contribution.”

Sigd means “prostration” or “bowing down” in Ge’ez, an ancient Ethiopian liturgical language. The holiday commemorates and is patterned after the events described in the Book of Nehemiah.

It is related there that following the return of the Jews from the Babylonian exile to the Land of Israel, in the 6th century B.C.E, they gathered in Jerusalem on the first day of the Hebrew month of Tishrei (Rosh Hashanah) and requested that Ezra the Scribe read to them from the Torah: “So on the first day of the seventh month, Ezra the priest brought the Torah before the assembly, which was made up of men and women and all who were able to understand… Ezra praised the Lord, the great God, and all the people lifted their hands and responded, ‘Amen! Amen!’ Then they bowed down and worshiped the Lord with their faces to the ground” (Nehemiah 8:2-6).

In addition to that Rosh Hashanah gathering, the Book of Nehemiah recounts another Jerusalem assembly that took place several weeks later, on the 24th of Tishrei. That second assembly culminated in the Judean community publicly recommitting itself to the covenant between God and the Jewish people: “On the 24th day of the same month, the Israelites gathered together, fasting and wearing sackcloth and putting dust on their heads. Those of Israelite descent had separated themselves from all foreigners. They stood in their places and confessed their sins and the sins of their ancestors. They stood where they were and read from the Book of the Torah of the Lord their God for a quarter of the day, and spent another quarter in confession and in worshiping the Lord their God” (Nehemiah 9:1-3).

Those two ancient Jerusalem assemblies, on Rosh Hashanah and on the 24th of Tishrei, are the Sigd holiday’s blueprint. During the Sigd, the priests publicly read, translate, and expound upon portions of the Bible, and the day involves fasting and a communal confessing of sins, as well as re-acceptance of the Torah.

Qes Mula Zerihoon, an Ethiopian-born priest ordained in Israel, explains that one of the Sigd’s central themes is also the Jewish longing for an end to exile and a return to Jerusalem. In Ethiopia, he recalls, the Sigd was celebrated atop mountains: “When we climbed the mountain, we felt Jerusalem in our heart of hearts. This deeply impacted our Judaism. Jews came from afar, two or three days on foot, on horses, and on mules, in order to have the chance to hear Torah from the priests. The people learned and were strengthened.”

In Israel, thousands of Ethiopian Jews from across Israel ascend to Jerusalem on the day of the Sigd, primarily to the Armon Hanatziv Promenade that overlooks the Old City. From atop a platform adorned with the flags of Israel and Jerusalem, the priests chant prayers in the ancient Ethiopian languages of Ge’ez and Agaw, praising God and beseeching forgiveness and blessings for the Jewish people. Biblical passages describing the giving of the Ten Commandments on Mount Sinai and the return of the Jews to Jerusalem from the Babylonian exile are read to the congregation in Ge’ez, and then translated into Amharic, the first language of many members of the Jewish community from Ethiopia.

When the priests descend from the platform at the conclusion of the services, they are quickly surrounded by hundreds of congregants, who escort them with ululation, applause, trumpet blasts, and dancing to a nearby tent, there to communally break the fast following the day’s repentance and renewal of the covenant.

Having twice traveled to Israel to experience the Sigd, I can attest that the holiday’s theme of Jewish unity persists and that Jews from other communities are welcomed to this Beta Israel celebration. Its religious leadership hopes more Jews will embrace the holiday.

For more by Shai Afsai about Ethiopian Judaism, see here.