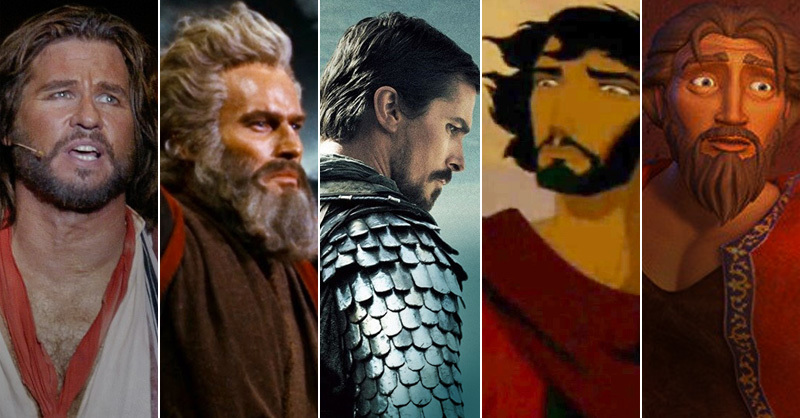 As we approach Passover and get ready to hear the story of the Jews’ exodus from Egypt, we at JewishBoston.com thought it would be fun to watch a few of the film versions of the story (including last year’s Christian Bale remake), give them a rating and create drinking game rules to give you a head-start on the holiday’s four cups of wine. Below each film review is the downloadable drinking game that corresponds with the film; just click the image, print it, grab some friends and booze, and drink generously as you question the biblical accuracy of what’s going on.

And how does one rate the story of Exodus, you ask? Through plagues, of course! (Obviously.) As we all know, there were 10 plagues set upon the Egyptians, and so there shall be for these films. I’ve rated these on a scale from one to 10 plagues—one plague (blood!) is great and 10 plagues is death…to the firstborn.

This is the version of the film that I imagine we all see in our heads when we think of the story of the Exodus. It wasn’t until my recent re-watch that I realized that when I’d previously seen it on TV it had been heavily edited. The biblical epic, in its original running time, is over 3.5 hours, and as I watched it I realized that almost half of it I had never seen before, and for good reason. This film spends way too much time with Moses as a prince of Egypt and not enough with him as Moses, the prophet and leader of the Hebrews. Yet the grandiose and epic style of filmmaking in the 1950s is certainly the perfect style for this story, and Charlton Heston will always be Moses in the reel in my head.

Looking back on it now, I don’t know if this film would have done so well in today’s Internet environment. An animated telling of the Exodus story? This would have been mocked and destroyed before it ever showed up in theaters or disappeared into the Internet ether like the other cartoon I watched. Yet here it is—a beautifully animated, awe-inspiring telling of the Exodus story. In this film, as well as in “Exodus: Gods and Kings,” the deep friendship between Moses and Ramses is not unnecessary or blasphemous, but creates a visual story that feels real and tangible. It makes it almost heartbreaking. I’m not going to lie to you; I teared up a bit while watching. I still recommend this film wholeheartedly.

“The Ten Commandments: The Musical” (2004)
Rating: 20 Plagues (Double Death of the Firstborn)

Rarely does a piece of pop art like this musical escape my notice for as long as it did—a musical about the Ten Commandments starring Val Kilmer and a pre-“American Idol” Adam Lambert?! I was sold. I wasn’t expecting it to be good; if it was good, I would surely have already known about it. So neither you nor I can be shocked that it didn’t disappoint in its awfulness. There are times when there’s so much going on that it’s difficult to follow anyone or know which characters are which or what anyone is sing-songing. On top of that, the plot jumps quickly from point to point without any sense of flow. Also, I must say, poor Val Kilmer. I love Val Kilmer, but I don’t know why on earth he thought this would be a good idea, or why he thought he could carry a musical. It’s only when presented with something so unenjoyably terrible that I turn it over to an expert: Charles Isherwood of the New York Times wrote in his review, “This bland, static, overproduced and under-directed musical all but submerges the famous episodes from Moses’ life in an oily sea of pleasant but unremarkable pop music.” So there you have it.

Just looking at the cast of this animated film, you would think it would be fantastic. Why would Sir Ben Kingsley, Alfred Molina, Elliott Gould and Christian Slater sign on to do this film? It certainly wasn’t money; the budget was only $10 million (and it only made $938,232 worldwide), and it certainly wasn’t the script. This film is a mystery—a mystery in the sense that I don’t understand why it exists. The animation is years behind Pixar and DreamWorks, and it’s not even as good as “The Prince of Egypt,” which was made nearly a decade prior. Unlike the terrible live musical mentioned above, which is actually something I would want to watch with friends and heckle, I don’t recommend anyone watching this, even kids. It’s a total waste of time. Ugh.

This is the surprising winner of the five Exodus films I watched. You would think that a modern-day, high-budget blockbuster would do a terrible job at telling the Exodus story, and yet I found this film to be riveting. Christian Bale is much more subdued than in his other films, and the way the film handles Moses’s relationship with God is inspired. Maybe it was my low expectations going in or the comparison to the other Exodus stories I forced myself to watch, but I enjoyed this film the most. At its core the Exodus is a story of small and grand moments, which can be hard to capture on the silver screen, yet Ridley Scott succeeds in showing Moses as a man who loses a family and identity but gains a people and a purpose.