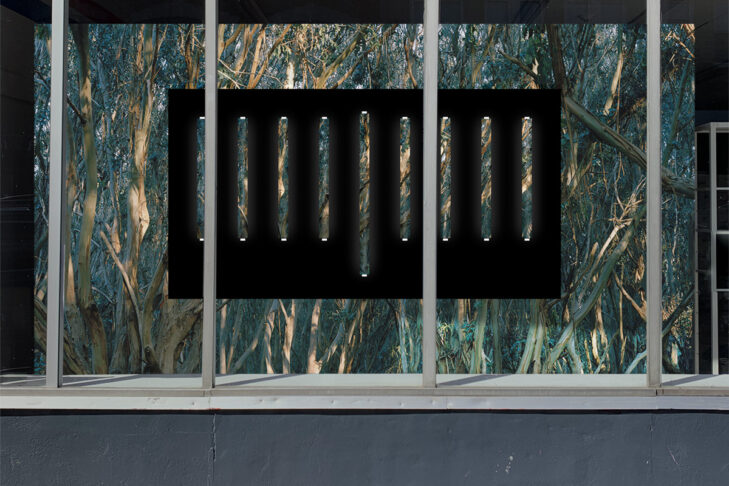 Welcome to the somewhat virtual and multifaceted rollout of “Hanukkah: The Festival of Lights 2020.” Thanks to Jewish Arts Collaborative’s impressive orchestration of art and literature, divine light will emanate from menorahs and customized holiday-themed windows throughout the Boston area, as well as a stunning projection of a commissioned poem on the side of the Museum of Fine Arts.

JArts executive director Laura Mandel told JewishBoston that this year’s free festivities, which begin on Thursday, Dec. 9, “are about bringing Hanukkah to everyone, as well as the essence of what Hanukkah is. It’s about light and community and connection, and how we can tell one another’s stories.”

The first virtual stop in this holiday extravaganza is at Boston’s Museum of Fine Arts. Family programming—featuring leaders from Boston’s Jewish day schools—and a presentation of Hanukkah’s rich traditions, including an artist talk, will bookend a candle-lighting ceremony. Simona Di Nepi, the Charles and Lynne Schusterman Curator of Judaica at the MFA, will be in conversation with Moshe Zabari, known for his silver Judaica, and Tamar Paley, an artist who reinterprets traditional Jewish objects with a feminist sensibility. Boston Dance Theater will perform “Shadows and Flames,” a piece commissioned exclusively for the MFA’s Hanukkah celebration.

“Brighter Connected” will also debut on Dec. 9. The citywide initiative brings light to the Boston area through eight window installations. Mandel said the Hanukkah-themed windows “will feature the miracle and the light of Hanukkah.” Some of the works also embody social justice issues. Mandel pointed out that TJ Reynolds’ work draws a direct line between Hanukkah and Black Lives Matter. His portraits of people of African ancestry are “drawn in light” on black surfaces and presented in light boxes. Reynolds’ portraits include depictions of local sculptor Fern Cunningham and Rabbi Tiferet Berenbaum of Temple Beth Zion. Reynolds said his art calls up the past to “truly make progress as humankind.” His “window” will be displayed at Freedom House in Dorchester.

Clint Baclawski’s photographic installation, “Bough,” will be shown in Chelsea. The Boston-based photographer transforms the large-scale prints he shoots on an analog camera into “light-filled installation pieces.” Baclawski told JewishBoston he chose to bring “Bough” to Chelsea “to honor Chelsea’s Jewish history.” Baclawski extensively researched the city’s once-populous Jewish community. However, after touring Chelsea’s Jewish neighborhoods, he decided to use a large-format photographic image of a eucalyptus forest from Montana de Oro State Park in Los Osos, California.

Baclawski said that in considering the image, he discovered eucalyptus trees are common in Israel and mentioned throughout the Torah. He uses nine vertical light bulbs that intentionally transform the photograph into a backdrop. “It’s the first time I’ve incorporated a massive photograph, but it works,” he said. “The image is its own source of light. The leaves on the trees looked like the Hanukkah flames, and the warm sun setting on top of the leaves and branches add to the idea of the light. This was always a strong image, and it was perfect to use it for the menorah.”

The installation also had Baclawski working with new material. His choice to use a matte surface rather than a reflective one “kept the focus on the nine bulbs as the central thematic element of the work.” Baclawski’s work will be displayed on a 12×8-foot wall, and the nine bulbs he uses with the image register as small in size relative to the large photograph in the background.

Erik Jacobs is a photographer who describes himself as “a visual storyteller.” In a recent public art project called “#StandsWithImmigrants,” Jacobs lit up Boston with photographs of immigrants and refugees he emblazoned across city landmarks. Jacobs took photographs of Yo Yo Ma and David Ortiz for the project, alongside restaurant workers, cleaners and doctors. He said his intent in taking the pictures of this eclectic community was to “stitch their faces onto the fabric of the city.”

For “Brighter Connected,” Jacobs has collaborated with Boston’s poet laureate Porsha Olayiwola to project her eight-stanza poem “Black as Light” in his installation called “Black Light.” Jacobs told JewishBoston that “we’re taking poetry and creating it in a new frame of public art. We’re using a high-powered cinema-grade projector to project Porsha’s poem on the side of the Museum of Fine Arts in Boston. With the MFA grappling with its history of inclusiveness, the ability to project about race and identity on the side of its building makes it interesting conceptually and important.”

Mandel shared a description of the poem, which states that Olayiwola uses “an afro-futurist lens to explore Black people as light, Black collective trauma as lightness, and the Black experience as a vehicle. Seeking to uncover and recover magic and joy via the current Black diaspora, all are invited to share their own poetry inspired by this work at #blackaslight.”

In the first stanzas of the poem, the poet proclaims:

we stay lit. beacon
doomed to this brunet burning,
body a lighthouse,

a dawn splintering
a dim sky into sunbeam
morning, a mourning.

Jacobs plans to highlight Olayiwola’s poem with varied pacing and graphic treatments. He noted that onlookers won’t see the poem all at once; the work will play through “word by word, line by line, in varying fonts and colors.”

Perhaps Jacobs amplifies the message of the JArts Hanukkah experience with an observation about his project: “‘Black Light’ contains many layers connected to the theme of Hanukkah and ‘Brighter Connected.’ Everything we’re trying to do echoes that—from the visuals where we are literally projecting light into the darkness and illuminating things.”