Close
Don’t miss another chance for fun!
Get the best Jewish events for children, teens and families delivered to your inbox every Wednesday with JewishBoston Plus Kids.
By signing up, you agree to our Terms of Use and Privacy Policy.
Yom Kippur Resources
View all 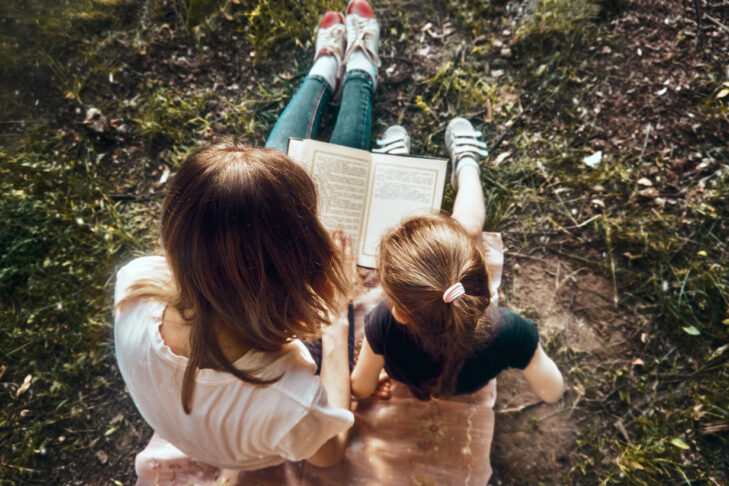 OK, so my family doesn’t belong to a synagogue. We have a comfortably woven network of half-Jewish families like ours, where we mark holidays such as Passover and Hanukkah. And, to be honest, I’ve always been curious about joining one—although I’ve often struggled with how much religion to impart to my kids. In some ways, I’ve felt like an interloper: I wasn’t raised religiously for a variety of reasons, and I only became more familiar with many aspects of Judaism once I started college and my adviser, who headed up the Jewish studies and English departments, took me under his wing.

That said, I’ve always identified culturally and with the ideals of Judaism, although I also felt very close to my mom’s Irish Catholic family—mine was a mixed-religion household before it became common, and both sets of grandparents had pretty strong ideas about their religious beliefs. Suffice to say: It’s complicated for me, and so I’ve just decided to address religion with my kids by devising our own routine, using books, friend celebrations and self-created rituals based on tradition. Is that OK? Yes, I think it’s OK. And it’s honest.

Take Yom Kippur: This is a period of fasting, prayer and atonement. We might not do this in the traditional way, but I still think it’s an essential reset—for myself and for my kids. I think about the start of the school year, and how I always start with the color-coded, hyper-organized, scrubbed-clean best of intentions. This will be the year that the lunches are packed the night before, the laundry is always folded and the kids’ shoes are neatly tucked into designated woven bins instead of strewn across the hall.

This usually lasts for a week or so until we slide into the thrum of daily life and clutter begins to build up along the edges, complete with too many obligations and practices and overlapping schedules and exposed nerves. A month in, I’m ready for a quick break, and Yom Kippur offers that, both emotionally and mentally.

No, my family doesn’t fast from food. But we’ll take a break from electronics. It will be a reminder to be more mindful of quiet distractions, like a book or a walk. What will it feel like to be unavailable for even a few hours, without refreshing and checking and replying? It will be deeply uncomfortable, which is exactly the point. The other day, I looked around at dinner and every single member of my family was on a device—and we were even out at a restaurant! It was basically an advertisement for sad modern family life, our faces illuminated by eerie blue lights as activity hummed all around us. No, no, no. Time for a break.

Then there’s prayer. I don’t tell my kids to pray, and I haven’t completely defined what prayer means for me, even as an adult, although the framework that feels resonant in my life is gratitude: Taking stock at the end of the day about what I’m thankful for. I think of it as though the present moment were a balloon that I’m blowing up with air, trying to gingerly expand and maximize it because I never know when it will completely pop. Right now, several of my friends are dealing with pretty serious health issues. Others are coping with divorces. As for me, I’m still muddling through the loss of my mom.

We never know when our one perfect life, our delicately arranged house of cards, will come toppling over—so we need to remember to pause and appreciate it before it all disappears. That might sound macabre, but I think it’s more mindful. And I try to get my kids to do the same—my kids, who take so much for granted, as they should, because they’re young and perspective is a curse of adulthood, but still: Around this time, I ask them to stop. To reflect. To make an informal inventory truly matters to them and to think about why. It needn’t be an elaborate, ceremonious contemplation; even just a few minutes before bed is a useful anchor for the day.

Then there’s atonement. This word carries the element of sin, of course, but to translate into my kids’ everyday lives, I like to think of it more as striving to do better: Where have we fallen short through the year? What would we like to focus on more in the future? What kind of people do we aim to be as we move through the world; what’s our moral road map for the year ahead? These are heavy, abstract questions, and they probably can’t be answered in a day—but they can be handled practically with a few goals.

I’ll ask my sixth-grader to revisit his volunteer plans for the year, which currently revolve solely around pandas (which is fine, but he might want to move on to, say, polar bears). I’ll ask my Kindergartener to do the same (he’s a penguin guy). And I’ll ask both of them to enumerate ways they could be kinder to one another in the coming year. Nothing overwhelming. But important.

I’ll also make a few amends myself: Have there been times I’ve lost my temper too easily? Didn’t show up enough in the way I wanted? Yes, because I’m human, and I know that the times I failed probably happened because I need to delegate my priorities in a different way next time around. So I’ll set little benchmarks, too, reconsidering ways I can be more deliberate and focused on the things I really care about—and less scattered and guilted about the rest.

Will this purposeful, grateful mindset and intention-setting last forever? No, but it’ll nudge me—and my kids—in the right direction, personal and paved in our own way, just like religion itself.