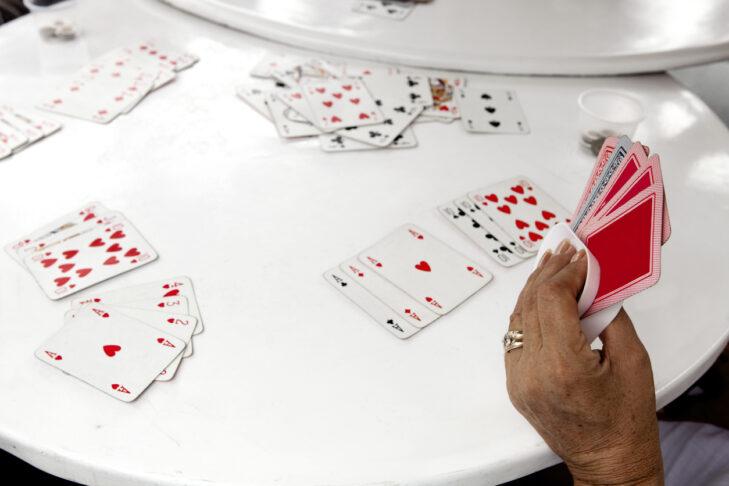 “With Sarah’s death was initiated her eternal life…. When some people die, they leave nothing behind. But after Sarah and Abraham died, the Jewish people remained.”
—Z. Hillel, Itturei Torah

Lemme tell you the one that killed at canasta!

my grandmother says, over the phone, laughing,
and all I have to do is close my eyes and I’m there:
the modest brick bungalow on Stanley Lane,
the front patio with its white-piped
plastic furniture, and in the foyer, a dog,
who for nearly half a century has lifted
its ceramic leg to the same silk plant in an eternity
of staking claim. There’s the matching
orthopedic recliners in the den and, on the fridge,
a plump doll with Back off, fatso! emblazoned
on a red leotard washed pink by years
of South Florida sun.

A woman was in the hospital, she begins
with a grin so big I can hear it, on what she thought
was the last day of her life, when God visited to say,
“Don’t worry, Mrs. Goldberg, you’ve got many years left.”

For years, God visited only Abraham, leaving Sarah
to live on faith alone. My grandfather, too,
was the one who dealt with the powers that be
for their fish market in Jersey City—though
Bernice kept the books, knew every
customer by name, and when the terrified delight
of Jaws consumed the country, made a sign
for the window: Get even. Eat fish!
Like Sarah, all her covenants were secondhand,
her promises spoken to her husband.

Thrilled at God’s words, Mrs. Goldberg paid
for the works: nip, tuck, lift—her butt, her boobs,
her face—she got it all done.

At 95, my grandmother is only five years older
than Sarah eavesdropping on the angels’
kvelling at her impending pregnancy, when
she laughed at God and then denied it, when
her withered breasts billowed with milk and
Isaac sprang from her, improbable
as a rabbit from a hat.

But on Mrs. Goldberg’s way from the hospital,
strutting out with her new face and new body, she stepped
from the curb and was mowed down by an ambulance.

I can’t complain, my grandmother says
every time we talk. But she could.
Torn shoulder, bad knee, constant need
to keep an eye on her sugar, so her go-to
cheesecake recipe is now, as she tells it,
Splenda in a blenda’. Nights, she lies alone
remembering gatherings at the lake, rides
on their skiff, the Miss Sugar, the boat she’d said
he was meshuga to buy, their little dog
Troubles. And though it’s been a decade since
his death, she still curses my grandfather
for leaving her to be this lonely.

Finding herself in heaven, Mrs. Goldberg
marched up to God and demanded, “God, you said
I had a long life ahead. Why am I here?”

While Sarah allowed herself only a chuckle
dusty as a smoker’s cough, this far on
in her lineage, my grandmother has surpassed
such propriety. The way a dust-plume
announces a horde on the horizon,
her laughter precedes her and its joy
will outlive her—a sonic Dead Sea Scroll, like light
from a long-exploded star. She cracks herself up
before she even gets to the punchline:

God looked her up and down and said, “Mrs. Goldberg?
Sorry, I didn’t recognize you.”

When it’s Bernice’s time, she will be recognized
by her laughter.

Across the evergreen field
of the felt-topped basement table,
God, alone, deals another hand.

The tang of new paint veils the brown
bullseye of water stains but not the funk
of mildew. How quiet the house is
empty. And Solitaire is less play than lonely
puzzle, a time-passing contest of dealer
versus deck: no matter how you wish
the cards, you take them as they are,
which is why this game’s other name
is Patience.

One turn begats another, each of us arranged
by suit and rank, however we might fight
our fates. Or rail against that bad faith covenant:
no more floods, but, sure, why not? to pandemics
and mass extinctions. Because Lord knows

there’s more than one way to go under.
When all you’ve created is far from how you’d
planned, that surge and relief at disappointment’s
release—little images of God, we
understand, and dread the great arm’s volatile
flash, dashing us all

from the table. For it’s always the same
dealer, always the same self-
dealing. And trust, after betrayal, is not belief
but hope—a feeling without foundation.

Learn more about poet Jessica Jacobs in this interview.