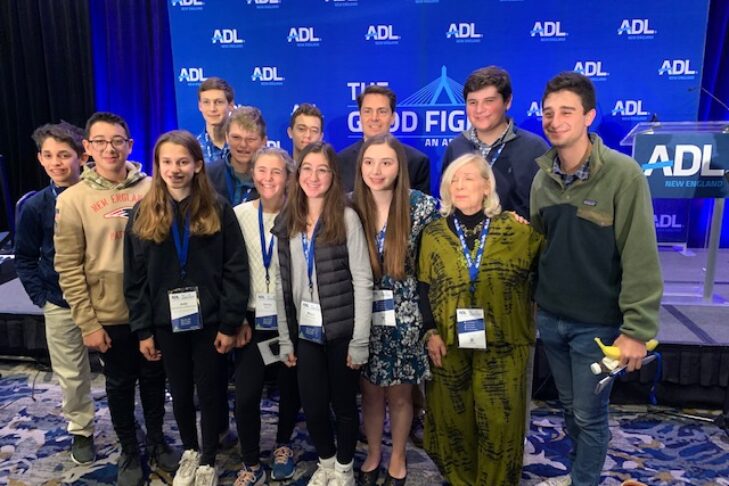 Rashi alumni and students at ADL’s “The Good Fight” (Photo: The Rashi School)

The energy in the room was palpable. Aisles of seats were filled with people of all ages who showed up to join The Good Fight, a day-long forum sponsored by the Anti-Defamation League of New England (ADL). With varied backgrounds, religions and experiences, the audience’s mission was aligned that Sunday: They were eager to learn how to confront antisemitism and intolerance now and in the future.

Those in attendance were local government officials, clergy, educators and community members, including parents, alumni and students from The Rashi School in Dedham. Among them were Maya S., an eighth-grade student from Rashi, and her parents. When they arrived at the forum, the room was almost at capacity. They couldn’t even find three seats together! “I was really surprised that so many people came,” said Maya. “To me, that proves people actually do care about antisemitism and about fixing the problem.”

Some of Maya’s classmates were also there, including seventh-grader Julia Z. and eighth-grader Emily B. For these three Rashi Middle School students, the question was never if they would attend the forum, it was how could they participate. Maya, Julia and Emily were familiar with the ADL’s work. As part of Rashi’s social justice curriculum, students complete a two-day ADL workshop to learn how to recognize and address acts of hate and bias. By all accounts, Maya, Julia and Emily were ready to join The Good Fight.

Emily had the honor of introducing Dr. Deborah E. Lipstadt, author and Dorot Professor of Holocaust Studies at Emory University. Dr. Lipstadt addressed the audience with words of empowerment. She encouraged everyone to stand up against antisemitism and antisemites, whom she described as being the same since the Middle Ages: “A person who hates Jews more than is absolutely necessary.”

Antisemites have been around for centuries and their acts of hate and violence are on the rise. We can see it manifest on the news, on national sports teams and even in our own backyards.

Just two years ago, the world watched in horror to see a torch-lit march by white supremacists at the University of Virginia, followed by the “Unite to Right” rally, which ended in a fatality. Julia, Emily and Maya went to a workshop at the ADL forum that addressed the Charlottesville riots, which had a profound effect on all of them. “The white supremacists kept shouting ‘white lives matter,’ but white lives have always mattered,” said Emily. It’s black lives, she said, that have been discriminated against. Emily feels a heightened awareness of racism and antisemitism in the community, and feels that minorities can be unjustly hyper-analyzed and/or seen as a monolith.

Another workshop at the forum featured Boston Celtics player Enes Kanter, who’s from Turkey. It was nearly a year ago when Kanter watched his teammates play the Washington Wizards in London while he stayed behind. He feared for his life if he left the U.S. because the Turkish government had a warrant out for his arrest. His crime? Speaking out against the Turkish president. When pressed by his teammates about why he did it, Kanter said he needed to have a voice. He was compelled to speak out for all of the innocent people and journalists who are unjustly incarcerated in Turkey.

And, most recently, antisemitism hit many local communities hard. Symbols of hate were found at several public schools, including one in Maya’s hometown that many of her friends attend.

“Although I live in a very Jewish community and go to a Jewish day school, I still recognize the different antisemitic acts that go on around me. In the past year, several swastikas were found in the [local public] school. The school paints over the swastikas. My friends talk with me about it and I think it’s shocking and upsetting,” said Maya.

Julia thinks the school could have done more. “They need to teach everyone that even though some people may have different religions or cultures, they’re still people and they’re not any different than anyone else. Whoever made the swastikas needs to know that it’s antisemitic and they are disrespecting everyone who is Jewish, and that’s not OK.” 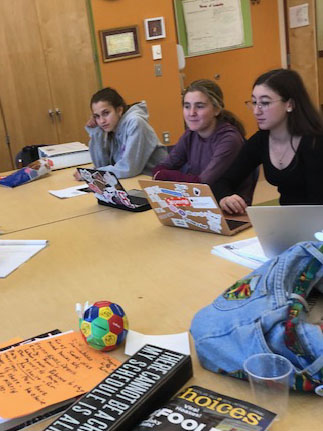 Their classmates agree. By attending The Good Fight, Emily, Maya and Julia opened up a broader conversation with their impassioned student government peers. When asked, ‘Why do we care about antisemitism?’ many hands shot up to answer the question:

“After the Pittsburgh shooting, we recognize that this is real—this is now.”
—Ezra K.

“Our religion has so many mitzvot about helping others. If you ever have a chance to stand up for yourself or make someone else’s life better, it’s always good to take that chance.”
—Hailey R.

“Moses said if we just do the smallest act, something good can come out of it.”
—Alana Z.

“If everyone is thinking that someone else will step in, nobody will do it, so you have to get it done yourself.”
—Raquel F.

“Our knowledge is passed on to the next generation—l’dor v dor. They need to know how to stand up against antisemitism.”
—Brahm L.

“Jews have been used as scapegoats throughout history, and history tends to repeat itself. If we don’t fix antisemitism, World War III will happen.”
—Maya S.

“We have to stand up to antisemitism and learn how to have a voice.”
—Emily B.

The Good Fight certainly prompted much dialogue, long after the forum ended. Emily, Julia and Maya said they spoke to their parents about what they learned at The Good Fight, how it resonated with them and how to be proactive in the future. Not only was the day inspiring and empowering, but it also stimulated authentic family conversations afterward about antisemitism. This topic can be difficult to discuss at any age, but in the words of Dr. Lipstadt, recalled by Emily, “Be proud to be Jewish instead of being fearful.”

Emily Sandhal is a member of the communications department at The Rashi School.