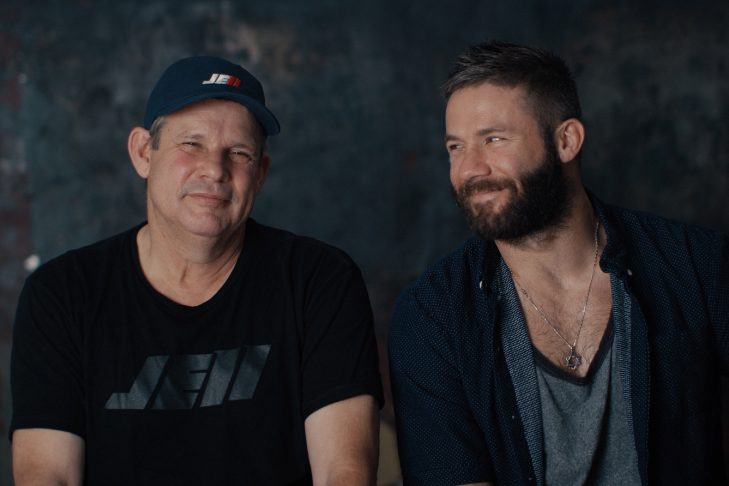 As narrator and New York sports fan Michael Rapaport reluctantly points out, it’s hard not to like New England Patriots wide receiver Julian Edelman. I totally agree, especially since Jules and I have a few things in common: We’re both small, underestimated, fierce, have our goofball moments and love to prove people wrong. All of those things are wrapped up in the new documentary “100%: Julian Edelman” on Showtime. It’s edgy. It’s fun. It’s creative. But you would expect no less from executive producer Assaf Swissa and director Kyler Schelling, cofounders of production company Coast Productions, who brought the same level of humor to their first film that they do in Jules’s YouTube videos.

For the Edel-fan and those who read “Relentless,” a lot of Julian’s underdog backstory presented in this film wasn’t new, but the dynamic mediums through which it’s told make it unique. Alongside documentary-standard archived video, interviews and photos of mullets, the film features animations from Thoroughbread, a fun cadence between jump-cut interviews with a diverse lineup and tasteful moments poking fun at his bromance with Tom Brady.

The celebrity cameos range from obvious pick for famous Boston sports fan Mark Wahlberg to a cadre of NFL all-stars across the league to Snoop Dogg reading Edelman’s NFL suspension letter. And then there’s Guy Fieri bursting in out of nowhere explaining how an ACL repair works with the same fervor he uses to teach America how to barbecue baby-back ribs.

While the story follows an injured athlete’s recovery, setback and eventual victory, the complex relationship between father and son deepens its reach. Frank Edelman helped coach Jules back into physical and mental shape, and when not together they spoke every day. In most shots of the film Frank is sporting JE11 gear, Julian’s brand. But then Julian got suspended, burying his full recovery in crushing disappointment. The most poignant moment of the entire film is when Frank plays “House of the Rising Sun” on a piano with worn-out strings. This heartfelt soundtrack to a montage of Jules training solo during his suspension and accompanying isolation underscores their over 80 days of not speaking because of it. While the tension between father and son is beautifully portrayed here, all details about the suspension—other than that it happened—are missing.

Throughout it all, Edelman proves he’s more than a ripped underdog in black boxer briefs and a sweaty Star of David necklace. You watch him go through the motions of making his bed at 5:30 a.m. and driving himself to a pre-surgery appointment, where the doctor tells him his knee might feel numb forever. You see him wincing in pain at every physical therapy appointment and hear the discomfort in his voice when he explains—both in the moment and in later on-screen interviews—what he needs to do to recover and not rush the process. Even though, he admits, you want to test it for yourself even though you know you shouldn’t.

There are other wonderful moments of relatability. Just like the rest of us, Edelman buries himself under blankets and pillows on the couch and finds comfort in delivery. “You eat like complete shit because you’re sad,” he tells us. Preach.

Above all, “100%: Julian Edelman” is a fun and intimate portrait of the fight for recovery and relationships. I 100% recommend it.