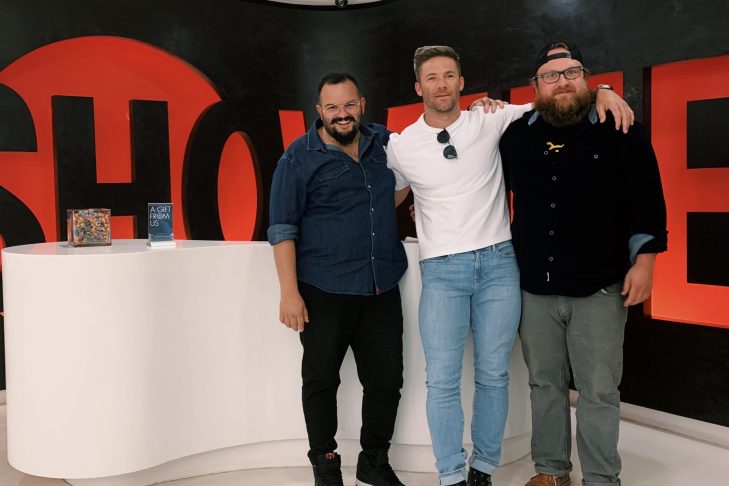 New England Patriots wide receiver Julian Edelman has become a major media figure since being named Super Bowl MVP in February. But his journey to that title was a tumultuous one, as chronicled in the new Showtime Sports documentary “100%: Julian Edelman.” This is the first film from Coast Productions, a company founded by the trio behind Edelman’s hysterical videos—Kyler Schelling, Assaf Swissa and Edelman himself. Schelling recently spoke to JewishBoston about creating a different kind of sports documentary, the meaning of success and his friendship with the Patriots star.

First of all, you produced the amazing “NFL Going Global: Edelman’s and Amendola’s Adventures in Mexico!” documentary. I can’t tell you how many times I’ve gotten the “Mexicooo” song Julian and Danny Amendola sing at the end stuck in my head.

That was funny. That was an organic thing that happened. There was a guitar in the editing bay and Danny just started playing it and Jules was singing over it. We were like, “Let’s roll it.” It was cool; it was interesting. It was a fun trip. That project was the impetus to start the “100%” project too. In many ways, it was the foundation for doing a bigger, longer piece on Julian.

When Julian tore his knee in the pre-season of 2017, I was at the NFL Network building in Culver City finishing that project. People came up to me with, “Hey, we should do something with Julian about his knee….” A couple other entities hit up Assaf Swissa, executive producer of “100%,” and me with the same kind of proposal. And we looked at each other and were like, “Let’s just do it ourselves.”

Obviously, you didn’t set out thinking the documentary would go from him being injured to becoming MVP. 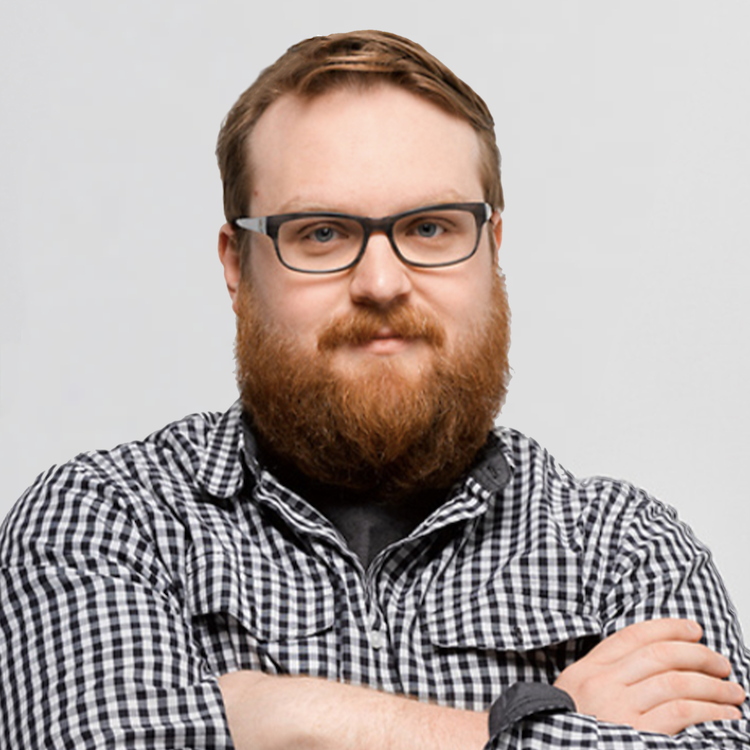 We knew it was going to be a story about his injury. But with documentaries—and this is something I was preaching from the beginning—the story comes together; you find the story. Now, did we get lucky with some of the things that happened in Jules’s career during this time period? Yeah, starting a documentary about someone tearing their ACL and in less than two years’ time the ending is him being the Super Bowl MVP. There’s a certain amount of luck to it. But we were always open to following wherever the story might lead us too.

This project in many ways really mimicked Julian’s career during this time period with the highs and lows and up and downs. There were lots of times where it was like, “You know what? Let’s just stop. This project’s pretty much done, there’s nothing here.” Or sometimes, “This is the greatest thing ever.” When you’re telling a story that’s real, you just have to be open to what it is. And then find the most concise way to communicate that with the audience in an entertaining, fun and informative way.

How did you and Julian meet?

I met Jules through Assaf, who hired me and my friend and old business partner Max Collins. Ever since I got out of college in 2013, I’ve been working in the Julian/JE11/Assaf Swissa world at various levels of creative input. I’ve always had in the back of my head Jules’s backstory being very interesting and atypical.

You’ve worked with Julian for six years. How do you translate his personality into a documentary?

I don’t know if you can really translate someone’s personality into a documentary. There are a couple of different things you need to do, particularly with a longer-form documentary. You need to find out what your story is, first and foremost, and the pros and cons, the ebbs and the flows.

The next part is, “Who is it happening to?” That’s how you can blend personality into your story because you’re talking about your character. If you’re writing a script, you write your characters, you make your characters. Knowing Julian for six years, I know how he ticks and how he is as a person. We have this story arc that we put into it. With documentaries, it’s not so clear as a script is, where you just write it out. But we found it—we found the concise story arc of his journey from his knee injury.

Knowing Julian and his personality, we had very specific scenes and very specific moments to say, “OK, here’s who this guy is and here’s how he ticks.” So that when we put him through these storylines you can go along the journey a little bit more and empathize a little bit with it. I think we do that a lot with his family. His family is a part of the story more than anything else, and when you see it, you see that his relationship with his dad and his mom and his brother and sister really is a thing that makes him who he is, and that he probably wouldn’t have achieved the thing he’s achieved without those people in his life. While on the surface the movie is like a sports documentary about a guy who got hurt, it’s really about family and what it takes to be successful on a core level.

So many athletes have bad injuries and come back the next year in perfect physical health, but mentally, not so much. What was it like trying to capture that?

It’s tough pointing a camera on someone during a hard part of their life. It’s difficult. And I have a balance between being the director and wanting to get the best shot, and then being someone who knows Jules and doesn’t want him to feel shitty and be in this situation.

You have to find that balance between, “Let’s get the thing; it’ll be worth it in the long run,” and, “Let’s also respect the space, respect his mentality and how he’s feeling.” It was helpful that we’ve worked together for so long and could wade into that together. He could be pretty honest, like, “You know what, let’s not do cameras today,” or, “You know what, actually, we need them here today,” and there’s a push and a pull, and I think we were able to be pretty successful with that in the long run.

It’s important to maintain that friendship, too. How does filming Julian compare to other athletes you’ve filmed?

Julian’s a little different just because he’s more plugged in on the creative too, and he also is very interested in the humor and off-the-wall irreverent style that me and Assaf like to write. So, working with someone like Steph Curry or someone like David Ortiz, we didn’t really try to subvert the expectations or the genre too much. We just tell it the best way we can in that sports world. But with Julian, he’s all about testing boundaries. He’s all about pushing the limits, and we love that, and we are too. It’s hard to compare the two because we have a relationship with Julian that’s much longer than one day with someone, one day with another person writing for this particular video. We actually work creatively. We watch movies. It’s a little bit more cultivated with Julian. He’s willing to test the boundaries and we are too, and it works really well.

What was your favorite moment of filming?

I would say the most exciting moment was at the Super Bowl, after the game was sealed, the game was still going on, but the game was over. The Patriots were going to win, Julian was very much in contention to be MVP and the Edelmans were like, “OK, let’s go down to the field.” So, following the Edelmans and specifically [his father] Frank down, back around, through the concourse. Everyone’s still watching, and you can see families are all coming down and just following that energy, walking down to the bowels of the stadium. [His mother] Angie is beside herself, and [his sister] Nicky is like, “We did it, we did it.” Jason, Julian’s brother, is just completely in disbelief. And I was thinking to myself, “We might have a movie here.”

Really there’s been so many amazing moments, not just with this movie, but my whole time with Assaf and Julian and all this crazy stuff we’ve been able to do. Just being in Israel filming at the Western Wall was an incredible moment. And shooting at the Super Bowl and shooting with Snoop Dogg, it was all these incredible, surreal moments that we’ve been able to do with Assaf and Julian. It’s hard to pinpoint just one.

What do you want people to take away from the film?

I would like people to walk away from this and be like, “Wow! I haven’t seen something like that. I didn’t know you could tell a story like that.” That would be a win for me. It’s not about football. It’s not about Julian. It’s not about the Patriots. It’s about a person who was able to achieve their dreams and the way that they were able to do it. So, I really think, and I hope it comes across as that, it’s more of a human story than a football story.

What have you learned from Jules?

Seeing how he operates. If you want to achieve your dreams, if you want to achieve success, there’s a certain level of work and effort and mentality, and you need to do whatever it takes to get it done. He’s a maniac with the stuff he does. I see that and think, “OK, that’s something to strive for, and if you can tap into that level of work ethic and that level of doing whatever it takes to get what you want done, then you can achieve some success for yourself.” It’s rubbed off on me.

Are there any Jewish moments in the film?

Julian’s wearing a Star of David for every interview. He’s got a necklace and he wears it, so he showed up with it. Once we did the first interview, we had to do all of them [with it].

We had Michael Rapaport narrate the movie, and he’s talking about all the reasons why Julian is this underdog. He was under 5-feet tall in high school, he played at a junior college, he played low-level Division 1 as a quarterback. And then Michael Rapaport goes, “He’s a short Jewish guy!” to emphasize other ways he’s an underdog. So that’s a Jewish moment, and then we show some of the footage we took from our CJP trip to Israel with Julian at the Western Wall.

Why was it important to incorporate that?

It’s a part of Julian’s identity. And Jewish people aren’t necessarily looked to when you think of athletes, and I think Julian is like the modern-day Sandy Koufax. It’s just a part of who Julian is.

This interview has been edited for length and clarity.