Did you know latkes used to be fried in goose fat? Neither did we.

This was one of countless discoveries Liz Alpern and Jeffrey Yoskowitz—cofounders of Brooklyn-based food venture The Gefilteria—made in their journey to learn about and reimagine Old World Jewish foods. Ahead of the Shabbat dinner they’re cohosting at Mamaleh’s Delicatessen this Friday (more on that later), Liz and Jeff made time in their stuffed schedule to speak with JewishBoston about Ashkenazi cuisine and the never-ending quest for inspiration at the heart of tradition.

“In some ways, gefilte fish is sort of the metaphor for all of Ashkenazi cuisine, which is often thought of as not the most tasty, as outmoded, irrelevant,” Jeff added. “And with Jewish deli, with all these Jewish food traditions, with all of this stuff, if it’s done right, if it’s made with fresh ingredients, if it’s made with love, then it’s going to be really fantastic.”

The pair articulate this in their cookbook, “The Gefilte Manifesto: New Recipes for Old World Jewish Foods.” Released last fall, “The Gefilte Manifesto” reclaims and reimagines traditions with over 100 recipes that tell over 100 stories. Spiced blueberry soup and fried sour pickles with garlic aioli are two such recipes (and yes, true to their namesake, Old World stuffed gefilte fish is in there too).

According to Liz, asking them to pick their favorite dish is like asking them to pick their favorite child. At the time of this interview, Liz went with crispy honey-glazed chicken with tsimmes. Known for being overly sweet, tsimmes is “one of those dishes that embodies the bad associations people have with Ashkenazi food,” which makes this recipe a perfect example of their impact.

“What I love is that it’s now one of the most popular recipes in our book because it flips those impressions on their head, and that just makes me so happy,” said Liz. “If we can change people’s expectations about tsimmes and make it something that they’re going to come back to again and again, it opens their imagination for the rest of the book and the rest of the possibilities of Ashkenazi cuisine in general.”

What can be surprising to someone who hasn’t studied this cuisine is that “while the popular imagination associates the Jewish deli with Ashkenazi food, there were absolutely no delis in Eastern Europe,” said Liz. “The roots of the deli can be found in Eastern Europe, but how much meat is consumed in the deli is very North American.”

Jeff continued this point by listing the different Jewish establishments that carried Old World dishes in America: delis, dairy restaurants (the “anti-deli”), appetizing shops (“where you can buy everything that goes on a bagel”), pickle shops and bakeries. Over time, the deli became the only one to remain at large, turning into the “greatest hits of food,” and yet it only offers one altered perspective now.

“The deli as we know it, or the Jewish reliance on all these deli meats and cold cuts and things like that, is relatively recent and [came from] affluence,” said Jeff. “A lot of people were eating many more vegetables, many more preserved vegetables and many more grains. And meat was only for special occasions.”

Ashkenazi snacks also had humble roots, and a lot, like blueberries and sour cream, were left out of the deli. They were simple, like Jeff’s grandmother’s favorite snack of fresh-baked rye bread and homemade butter, churned from milk from her family’s cow in her Polish shtetl. 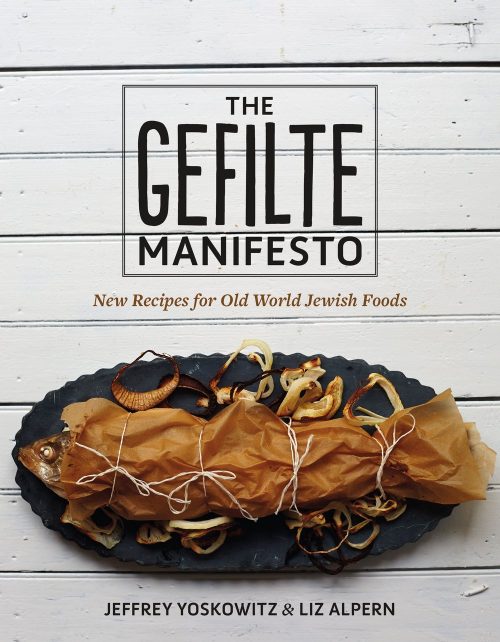 Today’s conventional deli, it would seem, is a misrepresentation of the dynamic cuisine created out of resourcefulness and seasonality. The Gefilteria’s emphasis on sustainable and seasonal foods is underscored by that inherent ancestral wisdom; it’s not just an organic reflection of the “well-sourced” and “local” culinary buzzwords of today.

“It was gratifying to learn our ancestors were farm-to-table,” Liz added.

This was not their only discovery. Liz and Jeff have been working together for over five years, sharing the insatiable desire to be inspired by connecting with and learning from as many people as possible. This leads to new recipes, deeper dives into culinary heritage and unique experiences for all involved.

“With all the collaborations we do, we want to figure out: What’s the story? How do we tell it creating a menu? And what ingredients are available to us and are local? That’s why, when we do an event in any part of the world, it’s going to have a different flavor and a different feel,” said Jeff.

This love and passion has led them all over the world’s kitchens, from San Diego to Berlin to an upcoming trip to Cape Town to Brandeis University in Waltham. It’s Liz and Jeff’s third year teaching an intensive summer “Food Studies” course at Brandeis for teenagers from across the map. In Food Studies, students examine the world and the Jewish community through a food lens, taking into account the history and context of traditions and the holistic food system they share. The teens, who have a wide range of experiences, work together in groups so everyone can learn from one another. They engage with food on myriad levels and cook the dishes they’ve discovered, experiential education at its finest.

This approach is Liz’s self-described “mildly controversial” advice for young adults: “I always tell young adults to work instead of going to school. I think the experience you get from trying different jobs and working in different environments, working with different people, will help you clarify both what you want to do with your life and what you’re good at…Do. Just do. Take a risk and do something.”

Jeff’s advice is different, which is telling in and of itself. “Don’t be scared of really collaborating and searching for people to work with and partners,” he said. “I was able to recognize there were a number of skills I did not have that Liz, as a partner, did have…I find there are certain elements or areas where, when we collaborate, we both feel like we produce a stronger product.”

“And so,” Jeff continued, “I would just really advise people to work with others, really figure out if you don’t have a certain skill how to bring someone in who may.”

Both pieces of advice come back to putting yourself out there to learn, grow and be inspired. That goes both ways. “Our goal with anything we do is to inspire people—Jewish, not Jewish, Ashkenazi, not Ashkenazi—to cook, to get in the kitchen,” said Liz.

This Friday, The Gefilteria will cohost Shabbat dinner in Boston. What started as a long-anticipated collaboration with Mamaleh’s Delicatessen evolved into the upcoming organic and exciting experience that will also include OneTable, a national community that helps young adults host Shabbat dinners, and Trybal Gatherings, an organization that creates getaways—like summer camp—for young adults.

It’s meaningful for Jeff to do an event in Boston, a city to which he has familial ties and sees as part of his identity. Liz brought that sense of connection together: “There’s something about filling your home with these smells, there’s something about cooking for people at your table and inviting friends over or family over to eat it. And that’s such a piece of this cuisine and this cooking…As much as I’m excited about going to Mamaleh’s because we’re going to create that homey environment, I also want people to leave Mamaleh’s and think, ‘Wow, wouldn’t it be great if I cooked some of these dishes at home and filled my own home with these feelings and these smells.’”