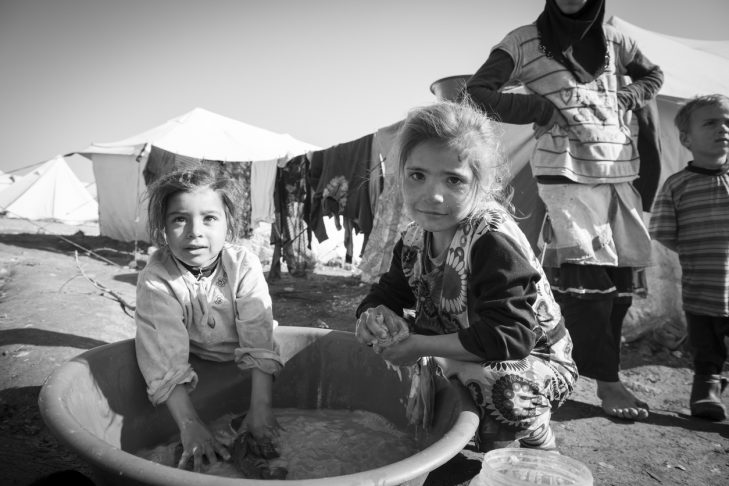 In 2015 Rabbi Michelle Robinson gave a High Holiday sermon aimed at changing the way Temple Emanuel in Newton participates in social justice work. Robinson asked her congregants to make the transition from largely in-house committee work to the complete emotional and financial responsibility for a Syrian refugee family for one year. In her impassioned appeal, she declared: “We Jews know all too well what it is to seek and be turned away from safe harbor. Imagine the redemptive power of our community coming together to not just watch from afar, but to translate the Torah’s timeless teaching today into deed.”

Word became deed for Robinson and Temple Emanuel on Jan. 18, 2017, when a family of five, who had been forced to give up their lives in Aleppo, Syria, arrived at Boston Logan International Airport. The rabbi and a core group of volunteers from the temple had been waiting for this day for over a year. Prior to the family’s arrival, many of them had been gathering at Jewish Family Service of Metrowest (JFS) for daylong training sessions guiding them on how to welcome and acculturate Syrian refugees to America in general and to Boston in particular. In his introduction to the trainings, JFS CEO Marc Jacobs advised volunteers gathered in his offices to become extended family to the new arrivals.

Last month Jacobs spoke with JewishBoston about the JFS Syrian Refugee Humanitarian Project and the critical involvement of Greater Boston’s synagogues in making it a success. With a change in the White House administration, Jacobs explained: “We originally intended for this work to be done incrementally rather than this intense onboarding. We’ve had to mobilize different kinds of resources.”

Only days after the family’s safe arrival, on Jan. 27 President Donald Trump issued an executive order banning refugees from entering the country and severely limiting entry for others who came from seven Muslim-majority countries. The order halted everything that Jacobs and his team had carefully put into place with local synagogues, including Temple Emanuel, Temple Beth Elohim in Wellesley, Temple Israel of Natick and Temple Shalom in Newton.

In an email follow-up, Jacobs asserted: “To think we are closing America’s doors to babies and pregnant moms and tearing families apart is the ugliest thing possible. This is about saving little children and mothers—that’s who comes here from Syria. Not terrorists. The executive order must be modified.”

The order prompted JFS and almost 40 Jewish organizations, including CJP and the Jewish Community Relations Council, to sign on to a statement headlined, “We Must Not Close Our Doors.” The signatories called the president’s executive order “unjust.” They evoked Jewish history and words of Torah that command one not to harm a stranger. “As Jews we came to this country often fleeing danger and oppression and often we were unwelcome and discriminated against upon our arrival,” reads the letter. “We reject any effort to shut our nation’s doors on the most vulnerable. We recommit ourselves to the work of protecting and advancing the dignity of all human beings and to preventing suffering in this world.”

Earlier this month, the 9th U.S. Circuit Court of Appeals ruled against President Trump’s order, effectively resuming JFS’ work with resettling Syrian refugees. In a second message to JewishBoston, Jacobs noted that the State Department is rescheduling arrivals for refugees slated for travel to the United States through early March. “For JFS,” wrote Jacobs, “that means a family with 3- and 5-year-olds will be arriving mid-week. Though we have accepted other families, no other travel dates are scheduled yet.”

JFS’ involvement with resettling Syrian refugees began last spring when Mark Hetfield, the president of HIAS, approached Jacobs. HIAS, a Jewish organization whose acronym stands for Hebrew Immigrant Aid Society, has been dedicated to “welcoming the stranger and protecting the refugee” for more than 130 years. HIAS first set up shop on Manhattan’s Lower East Side to assist Jews fleeing pogroms in Russia and Eastern Europe. Over the decades the group’s work expanded to helping Jews in dangerous situations all over the world resettle in America. By the early 2000s, HIAS extended its mandate to help refugees and immigrants of all religious and ethnic backgrounds.

Jacobs agreed to partner with HIAS to resettle up to 15 Syrian refugee families in Massachusetts. Until that point, Jacobs and his staff had been mostly focusing on resettling refugees from the former Soviet Union and Ukraine. Fleeing more for political reasons and already having family in the area, those refugees presented a more typical profile. Syrian refugees typically have no American ties and, as Jacobs pointed out, are war refugees.

To best aid the refugees, Jacobs built coalitions with Islamic centers, the American Arabic Benevolent Association and the wider Syrian-American community. “This is complex work,” said Jacobs, who has also reached out to academic partners, medical institutions and mental-health professionals.

Gil Preuss, CJP’s executive vice president, said Jacobs has “thought through issues like how to make the acculturation [for the refugees] to an American society as smooth as possible.” Preuss noted that while CJP is not a direct service provider for the refugees, it has advised and connected Jacobs and his team with people who can help. “Our commitment to the idea of resettling refugees,” said Preuss, “has been in place for decades and decades. This is a continuing part of that commitment to immigrants and to American society in support of the work that our agencies do for refugee resettlement.”

Robinson recently reflected how Temple Emanuel has come to demonstrate the redemptive power of community. She said she sent an email to the congregation sharing the news of the arrival of the refugee family that included a link to a website where people could sign up to help. That was at 6 p.m. Less than two hours later she received an email asking her to please add more items to donate because every request listed had already been filled.