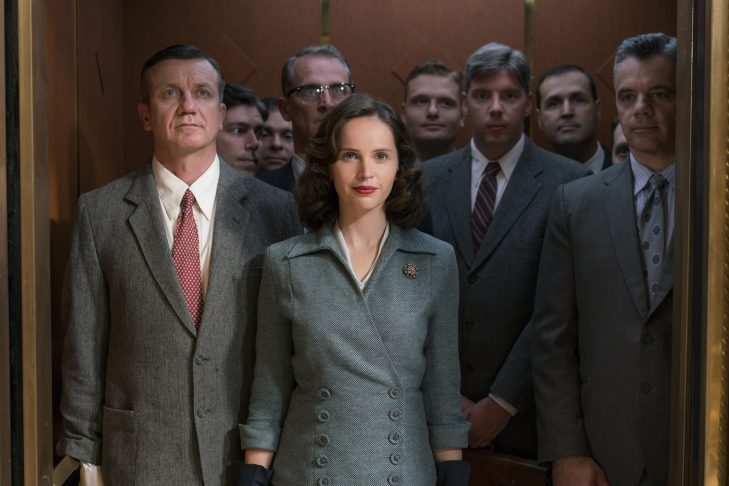 You must go see the new Ruth Bader Ginsburg movie, “On the Basis of Sex.” I’ll explain why later.

In 1983, I was a sophomore at a state university in New York’s frozen north, serving as secretary on the sputtering Hillel board. It was a campus of 15,000, and 5,000 of those students were Jewish. Fewer than 5 percent were involved in Jewish life on campus. The Jewish Theological Seminary of America, the Conservative movement’s flagship East Coast institution, had recently begun a project of sending rabbinical students out to campuses to help grow Jewish life. This explains my monthly rounds, posting fliers for the visit of one Josh Gutoff (Gann students take note). Tasked with the responsibility for publicizing his visit, I felt a parallel obligation to show up. Once a month, Josh and I sat in a second-floor room of the chapel, learning. It was usually just the two of us, among other things a sign that I did not have a future in PR.

Toward the end of the year, Josh mapped out my future: Graduate from college, study at the Pardes Institute of Jewish Studies in Jerusalem for a year, enter rabbinical school. I laughed. JTS had voted that October to admit women to the rabbinical school for the first time, and I thought it was sacrilege.

I had grown up in a synagogue with an Orthodox rabbi, where the sisterhood president was not even allowed on the bimah to present gifts on Shabbat. This was my unquestioned reality, and I had arrived on campus determined to build my traditional practice. My Shabbat mornings with Josh began as a courtesy.

He did, though, set me on a path of craving serious Jewish learning and engaging with text firsthand. I started right away, with intro to Talmud at the JTS summer school. I came to understand how the movement could decide to ordain women, but my interest remained purely academic.

I transferred to Brandeis University that fall and found the campus Jewish life that I had been missing. On the very first Shabbat, the Hillel director told me I should go to rabbinical school. I was nonplussed. In a course on the Jewish-American family, I joined a group project on the impact of women’s careers on their families (which now sounds like a crazy topic). Still unaware of the direction in which I was traveling, I suggested we do a case study on women in the rabbinate. It wasn’t long before I realized that I was running toward something, rather than running away.

Responses to my decision were not universally positive. My mother, Eastern-European born and 1950s-America bred, lectured me on what it would mean to separate myself from my (less traditional) family. When I pointed out that it was nearly identical to the “don’t intermarry” lecture, she was at a loss. A letter to the editor of mine was printed in The New York Times, in response to a column written by a woman who described her entrance into the rabbinate as an act of revenge on the Orthodox community in which she had grown up. The office for my summer job was shared space with an ultra-Orthodox social service agency. I have a vivid memory of being backed against a wall while a black-hatted man who had read that day’s New York Times harangued me about how women couldn’t even study Talmud, let alone become rabbis. I waited patiently while thinking, “You shouldn’t even be standing this close to me.” On the other hand, my father’s Orthodox best friend said, “Oh! We’ll finally have a rabbi in the family!”

All of this came back to me in a flood as I watched Felicity Jones navigate a sea of men on RBG’s first day of law school. Both the excitement and the isolation were so familiar. We were eight women in my rabbinical school class, far outnumbered by the men. There aren’t many spaces anymore where that contrast is so stark. But as I watch my own daughters navigate the world, I know the barriers may be more invisible than they were then, but that doesn’t mean they’ve disappeared.

So, why do I think you should see the film? We live in a time that feels so hopeless for so many, in which walls grow higher and the hope of bringing them down seems lost. But when you watch “On the Basis of Sex” you start to believe in the future again, and you remember that one person really can turn the tide. And when you leave the theater, you just might feel like it’s your turn next. “The work is not yours to complete, but you aren’t exempt from doing your share” (Ethics of the Fathers 2:16).