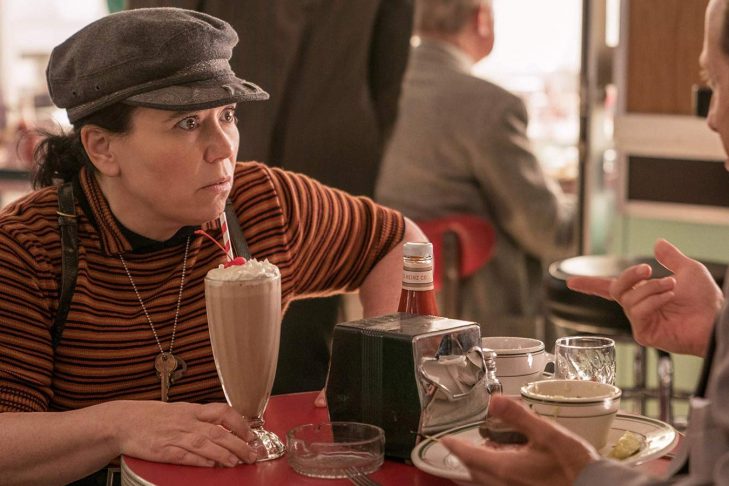 Alex Borstein as Susie Myerson is the best thing about “The Marvelous Mrs. Maisel,” aside from Tony Shalhoub. (I think my colleagues would agree.)

She is tough. She is saucy. She wields a mean plunger. She is real. And she was justifiably nominated for Best Performance by an Actress in a Supporting Role in a Series at last night’s Golden Globe Awards.

Sadly, she lost out to Patricia Clarkson from “Sharp Objects.”

But Rachel Brosnahan as Midge Maisel took home the Best Performance by an Actress in a Television Series trophy for the second time (she’s the first woman since Tina Fey in 2008 to win her Golden Globes category twice!), and planned to feast at In-N-Out Burger after the ceremony, a very Susie-esque move. (The show was also nominated for a second time but lost this year to “The Kominsky Method.”)

Brosnahan is terrific, but this turn of events also seems a bit too Maisellian. Midge swoops in and gets all the glory and attention; yet again, Susie, the faithful, tough-talking manager, smirks on the sidelines.

But it is Susie who provides this unrealistic confection of a show with a healthy dose of humanity. It is Susie who has normal financial worries and actual emotions. And it is Borstein who has actually mastered the challenge of portraying a multi-dimensional character, all while basking in Brosnahan-as-Midge’s saintly aura. Brosnahan can spout off rapid-fire one-liners while looking good in lipstick and a dress, but Borstein managed to carve an endearing character as a frumpy, amorphous wing woman. She’s a salty foil for Midge’s character while getting in a few zingers of her own. This takes skill.

Skipping around in stilettos while radiating unflappable perfection is its own special feat, but Midge’s role is also cloyingly one-note, without range. Susie, meanwhile, can go from bubble bath to Catskills cabin to comedy club to Rockaways kidnapping and make all of it compulsively watchable.

Susie is a woman with a past. Midge is a woman with a wardrobe. Maybe next season, she can babysit Midge’s absentee kids—a situation that definitely warrants some kind of professional recognition. In the meantime, well, Susie has once again been relegated to sleep with the help, clutching a plunger instead of a statue, waiting for her moment to shine.