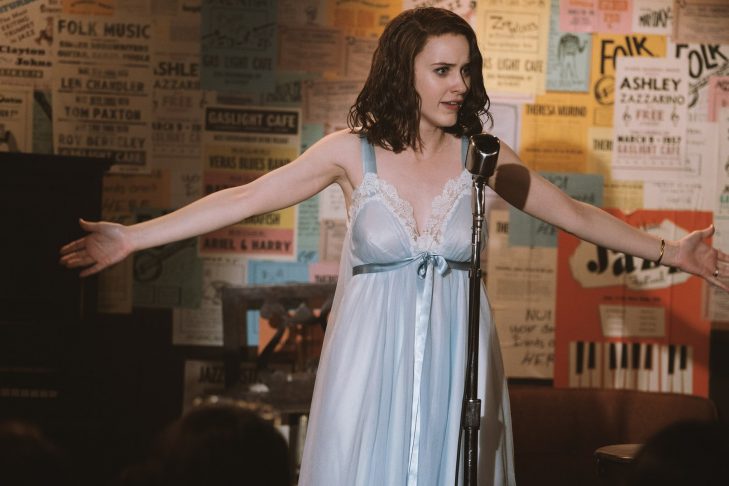 When I first heard the buzz about “The Marvelous Mrs. Maisel,” Amazon’s new show about a young Jewish housewife struggling to be a stand-up comic in New York during the 1950s, I was pretty amped. The show picked up several Golden Globes, and the hype increased. I’m just a Jewish girl, wandering through the television landscape in search of representation and validation. I was hopeful! Maybe we were finally getting a show that would introduce some dynamic new Jewish characters into the zeitgeist! Sigh. As if. I watched the series and lo! My hopes were dashed.

Some people love “The Marvelous Mrs. Maisel,” and truthfully there’s much to enjoy about it. It’s a well-made, stylish show with great design, great sets, and some snappy dialogue. The show unfortunately undercuts its wit and sparkle by pandering in Jewish stereotypes—especially infuriating clichés about Jews being neurotic, materialistic and privileged, obsessed with status and the sound of their own voices. In one early scene, our heroine, Miriam “Midge” Maisel, actually shoves a fellow performer, a woman of color, off the stage so she can grab the mic herself for her stand-up act. This was played for laughs on the show, but I found it cringe-inducing. Several episodes later, I was grinding my teeth during an excruciating scene at a synagogue, wherein Midge’s shrewish mother publicly berates her during Lecha Dodi. So random. She could easily have berated her at home!

In my experience, stereotypical Jewish characters can run the gamut from Actually Enjoyable Self-Aware Caricature (Ilana Glazer in “Broad City”) all the way to “OH MY GOD I’m Going to Claw My Face Off” Self-Loathing Mockery (Larry David in…everything). All the Jewish characters in “Maisel” can be plotted on this very particular spectrum—Midge’s mother and father exemplify the dysfunctional family dynamics and embarrassing antics that, heretofore unbeknownst to me, are apparently the real hallmarks of Jewish life and culture! I can’t believe I didn’t learn about that in my time in yeshiva. It’s pretty depressing that the characters in “Maisel” are merely the latest additions in the expanding chorus of Eternally Kvetching TV Jews. You know, the kind of nebbish character that shows up consistently in everything, including “Seinfeld,” “Curb Your Enthusiasm,” “The Nanny,” “Entourage,” “The Big Bang Theory” and “Transparent.”

There’s a lot of blame to go around for the sustained use of the same icky Jewish character motifs on screen again and again—and quite a lot of initial blame, specifically for the navel-gazing Jewish New Yorker character, can be placed squarely on the decrepit shoulders of the Thing of Evil of Which We Do Not Speak. (OK, fine, I’ll type it: Woody Allen. Great, now I have to burn my keyboard.) But this is the Golden Age of Television! I have been inspired seeing that there appears to be a growing (albeit slow) movement toward developing stereotype-busting representation of other ethnic minorities onscreen. So why are there more dynamic and emotionally compelling CGI dragons on “Game of Thrones” than multidimensional and diverse Jewish people in “The Marvelous Mrs. Maisel”?! (I mean, I still want the dragons. Please don’t get rid of the dragons. This is not a criticism of the dragons.)

Even the Jewish characters I enjoy the most in TV and film primarily fall into yet another category of stereotype: The Angry, Vengeful Jew. You’ll find iterations of this trope in inspirational characters (well, inspirational to me, anyway) like Magneto from the “X-Men” films, Sgt. Donny Donowitz AKA The Bear Jew and Shoshanna from Quentin Tarantino’s “Inglorious Basterds,” and even “The Wandering Jew” from “Fargo.” One of my favorite TV shows, “Peaky Blinders,” features a Jewish mobster in interwar London. Alfie Solomons is absolutely an archetypical Fagin villain on paper, but, as played by Tom Hardy, he’s charming, delightful and profoundly GIF-able. Though he’s a backstabber and betrayer of the highest order, Alfie also uses his ill-gotten platform to confront anti-Semitism wherever he encounters it—from fellow underworld criminals to Russian aristocrats. His violent reactions to Jew hatred are so satisfying and cathartic and downright funny that he manages to transcend the stereotypical cloth from which his character is cut—but Alfie is a rarity in that regard, and while deeply loveable to me, he is still problematic.

My list of angry, vengeful Jewish characters is a limited panacea in contrast to the overwhelming pantheon of neurotic Jews onscreen, and therein lies the main reason I was disappointed in “The Marvelous Mrs. Maisel.” This was a great opportunity to break the mold and create truly stand-out characters to put a new spin into Jewish representation on television. Instead, we got more of the same old, same old—just with amazing costume design.

Lastly, I can never forgive this show for framing “Midge” as an acceptable nickname for Miriam. I really thought our people had suffered enough.