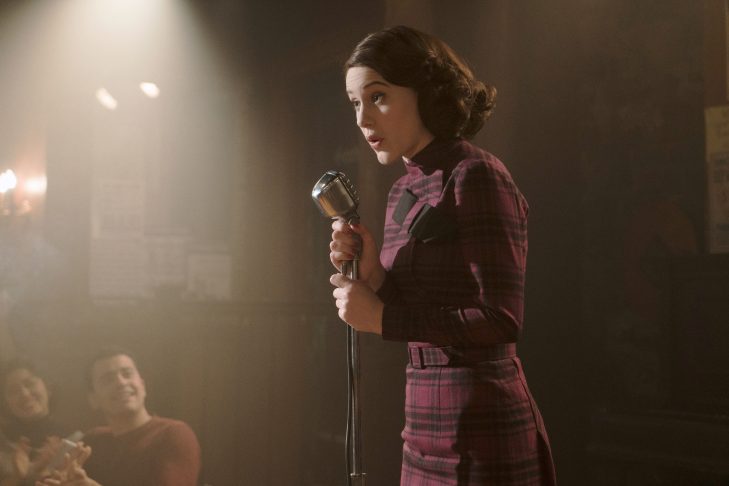 “The Marvelous Mrs. Maisel” swept the Golden Globes on Sunday night, and everyone even loves it on Rotten Tomatoes. The sets, the scenery, the script: Everything is pitch perfect, right down to the alliterative title. (As The Washington Post pointed out, it’s almost too perfect. But therein lies the madcap charm.)

If you haven’t seen it yet, a quick synopsis: Miriam “Midge” Maisel is a Jewish housewife with the ideal 1958 life: kids, successful husband, drop-dead gorgeous apartment on the Upper West Side (how do they afford it?), coddling parents who live a couple floors above. Her husband, Joel, is a businessman by day and an aspiring, fairly talentless comedian by night. He performs at the famous Gaslight Cafe while Midge lovingly gives him notes. Then she discovers that he’s been ripping off his act from other comics. Once he’s been found out, he has a midlife crisis, confesses that he’s been cheating with his wide-ankled secretary and leaves her. Midge gets drunk, as one does when this sort of thing happens, and then appears at the Gaslight herself to deliver a hilarious, stream-of-consciousness vent about her rotten husband, her ruined life and the contents of her purse. She is Joan Rivers with less eye makeup and a higher blood-alcohol level.

Midge then proceeds to lead the life that every newly single mother who has been dumped by her rich husband might dream about. In the real world, single mothers have to, you know, go to work, deal with child care, grieve about why the hell the brutish spouse fled with his secretary and so forth.

There is none of that introspection here. Midge seems to never parent her children. They conveniently disappear with her parents’ housekeeper, Zelda, freeing her up to pursue her comedy career. Conveniently, she is discovered and groomed by the Gaslight’s surly booking agent, Susie Myerson, who takes her on as a client and dutifully plumps her ego while still managing to maintain a whiff of jaded superiority. She’s able to move in with her parents and listen to comedy records on the floor of her spacious childhood bedroom before dinner is ready (prepared by the housekeeper). She has the luxury of being testy and feisty on stage, ending up in jail, and not worrying about getting home to her kids. And she doesn’t appear to really care all that deeply that her husband is a lout: It’s comedy fodder, that’s all. Her parents, who have to explain the absence to the rabbi and the neighbors, and who have to deal with her son commandeering their living room TV, seem to be the true victims here. They provide the tension and the grounding.

So it’s completely and wholly unrealistic, and that’s why it’s so refreshing. We don’t have to deal with the undercurrents of resentment for her husband, or the complexities of maintaining a fledgling comedy career while caring for two small children or pesky financial worries. Midge is thoroughly unencumbered by reality even while her comedy routine depends on it. There is zero introspection. There are no hindrances, no moments of doubt. A new, better life begins automatically; her dreams are right there for the taking. The only friction comes from her squabbling parents and in-laws, who fret about what the neighbors might say and over who owns the couple’s apartment. Midge is blissfully unaware, almost childlike. She is the anti-Roseanne. She is untroubled by small indignities, like being talked down to by a sexist judge who wonders why her husband isn’t in court with her. These are mere distractions. She is coddled and cared for like a Faberge egg.

In worse hands, this could be incredibly annoying. We want our heroines to struggle and then persevere. For Midge, there is no struggle. It’s all smooth sailing. We live in an era of disclosure comedy and journalism: This is the era of the memoir reveal, the big fall from grace and the glamorous triumph, whether it’s drugs, divorce, depression, infertility, illness. This is our fuel. Midge doesn’t rely on this fuel. There is no groping for a larger societal message, no internal conflict or external battle. Even when her husband’s mistress confronts her at work (yes, she does eventually get a job, at a department store), the confrontation is so neat, so tidy, so composed. Wouldn’t you want to smash a perfume bottle over the mistress’s head? Not Midge. She just stands there, looking bemused at the poor little thing.

And for women today, this might just be the ultimate fantasy. This is what makes the show so binge-worthy. It is completely detached from most women’s reality, unapologetically so. It’s pure entertainment, pure escapism. Midge is the woman we’d all be, if only we had the wit, the money, the composure, the time and the scriptwriters.