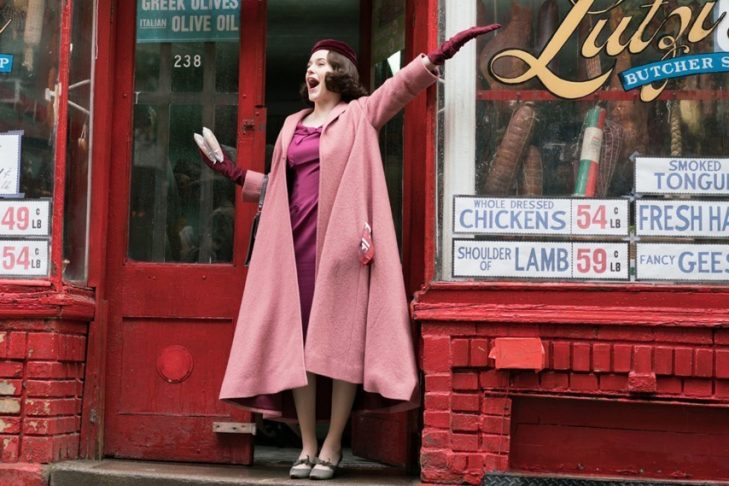 “The Marvelous Mrs. Maisel” cleaned up at the Emmys the other night: best comedy series, best writing, best period costumes (how could they not?), best supporting actress (Alex Borstein as Susie Myerson), best lead actress (Rachel Brosnahan as Mrs. Midge Maisel) and more.

It returns for Season 2 on Amazon Prime later this year. I can’t wait. I have a love-hate relationship with the show: Its frenetic dialogue (who talks like that, except in musicals?), the glamorous apartments (who lives like that?), the conveniently prop-like children (whose parents babysit that often?). But that’s also why I adore it: Mrs. Maisel is funny enough to be relatable but just this side of aspirational. Midge is the Betty Draper of “Mad Men,” except with a semi-career and a sense of humor. Oh, and better coats.

So I’ve been thinking about what I’d like to see happen next season. A few ideas for Amy Sherman-Palladino‘s consideration:

A little more of Midge’s quasi-neglected kids, please. Right now, they’re usually spirited off to her parents or taking endless naps. One child watches a lot of TV. This is not how it really works! It would be refreshing and character-enhancing to watch her cope with a parenting crisis or, heck, even a babysitting snafu to remind us that being a single mother by day and a rising comedy star by night isn’t really as glittery and wonderful as it seems. I would appreciate Midge more if she struggled, just a bit, sort of like a real person. Her humor would come from a truer place.

And more period-appropriate pop culture references, too. Besides Lenny Bruce and the glacially cool Sophie Lennon (Jane Lynch), this show sometimes feels as though it exists in some kind of technicolor Manhattan fantasyland. What about Joan Rivers? Totie Fields? Phyllis Diller? Who does she admire? Who else is struggling right along with her? Anyone? “Mad Men” was great because it was so much of its place and time; there was so much cultural context woven into every episode that framed its characters’ impulses and upsets. Midge sometimes seems like she was manufactured in a lipstick factory.

A little backstory from Susie. We know she hates her family, but why else is she resigned to being a growly, sassy wing-woman with a chip on her shoulder? And what, truthfully, does she see in Midge? We don’t quite know where her baggage or motivations come from. How did she find herself skulking around comedy clubs, anyway? What does she want out of life? Clearly, something more than waking up hungover in her hamster-trap of an apartment. Susie, who are you when Midge skips home to her palace on the Upper West Side?

More Tony Shaloub! Abe Weissman crackles whenever he’s on-screen, and his bemused chemistry with his wife, Rose (Marin Hinkle), keeps the show grounded on planet earth a little bit. Theirs is a real marriage, even if she sleeps with her makeup on. Also, it would be nice to know how a professor affords that massive apartment. I mean, he probably has tenure, but still.

A flash of humanity from Joel Maisel. I’m still not really sure what Midge sees in this cheating, slithery wimp. He did punch some guy who heckled her in the last episode, which was a brave and honorable thing to do, but he mainly appears to be a coddled imbecile with few redeeming qualities. Why was she attracted to him in the first place? Certainly it’s not his gift for stand-up comedy.