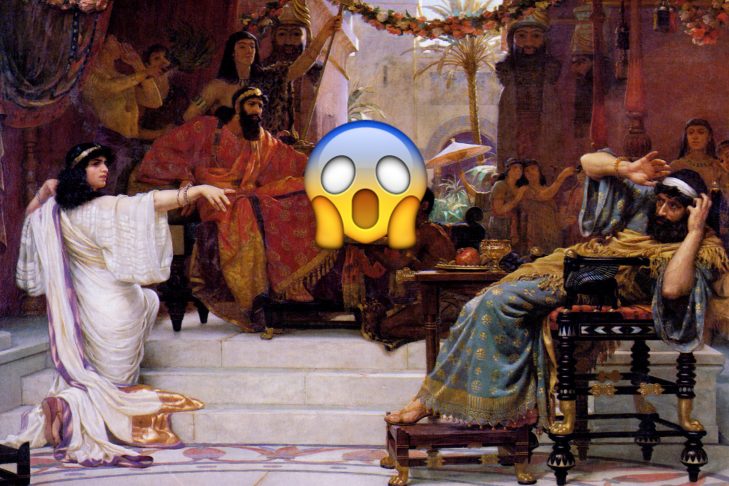 The story of Purim starts with a #nextlevel lit party. King Ahasuerus of Persia ruled over like a bajillion provinces from his palace in the capital city of Shushan. He threw a party that lasted six months, no joke. The aesthetic was luxe, and the Grey Goose was flowin.’

Ahasuerus got totally shit-faced. He demanded his wife, Queen Vashti, make an appearance at his party so that all the men could objectify her. Vashti was like, “Hard pass on that! #TimesUp!” But it was 486 BCE and those words high key meant nothing. Ahasuerus got mad heated, ‘cause he thought he was losing face in front of his guests. He really didn’t get that the future is female, so he crowd-sourced a solution to the problem of his “disobedient” wife.

Ahasuerus’ dudebro friends suggested he say, “Thank u, next, bitch!” to Vashti and get a new #queen. The king’s squad said, “Look on Instagram to find the flyest women in the land! Gather all those hotties into Shushan and get Hegai, the royal stylist, to provide for them 100 percent human hair extensions and Kylie Lip Kits and then choose your new wife based entirely on her #glam!” The king shipped this idea.

In Shushan, there was a Jewish man named Mordecai. He had an orphaned niece named Hadassah, whose Instagram handle was @Esther. Esther was total goals: In the words of the prophets Usher and Ludacris, “On a one-to-10, she was a certified 20.” She was brought to the palace along with many other women to work with Hegai, truly the Jonathan Van Ness of antiquity. But Esther was unable to show the intersectionality of her #feminism, for Mordecai had told her not to reveal that she was #Jewish.

Once they had worked on their glow-ups, each of the women slid into Ahasuerus’s DMs. King Ahasuerus felt some type of way about Esther and swiped right. He set the royal crown upon Esther’s head and called her “bae.”

Mordecai liked to chill at the king’s gate, keepin’ an eye on Esther. One day, he overheard two of the king’s servants plan to kill the king. Wig! Snatched!

Mordecai spilled the tea to Esther, and Esther gave the king the deets. The two servants were forced to eat Tide PODS, and thus they died. And lo, all this was added to the king’s blog.

Then King Ahasuerus promoted a fuckboi troll named Haman to be his advisor. All the king’s servants bowed and stanned Haman. But because Haman was dripping in idolatrous bling, our man Mordy couldn’t bow to him—Jews don’t roll like that.

Haman was hating on Mordechai and super jelly and decided all the Jews should die. And as the Prophetess Taylor Swift hath foretold, haters gonna hate, hate, hate, hate, hate. Haman cast dice to figure out what month and day was best for a populist uprising to kill the Jews. He picked the 13th of the month of Adar. #BYOB! (Bring Your Own Bayonet!)

Just like now, anti-Semites love to accuse Jews of dual loyalty. Creeptastic Haman told Ahasuerus that there was a group in his kingdom who were “different” and “other” and had their own rules and laws and Netflix passwords that they wouldn’t share. He suggested Ahasuerus allow him to kill these people—Haman even offered to pay for it!

Snap stories were sent to all the king’s provinces, with save-the-date invites to the impending massacre. The Jews were shooketh, and can you blame them? At this point, the Jews hadn’t seen any spoilers about how the next couple of thousand years were gonna go for them. They did not know that “Survivor” by Destiny’s Child was their unofficial anthem.

Mordechai was distraught. He tore his clothes and put ashes on his head (in mourning, not because it makes for a great exfoliant according to Pinterest).

Mordechai told Esther it was time for her to reveal her secret identity and tell the king not to kill the Jews. Esther was like, “Ummm, dude. You realize if I go into the court without expressly being invited, the king could just have me killed?” For the king was an equal-opportunity despot in that way. But Mordechai kept it real—Esther alone had the power to save the Jews. Esther summoned her inner bad bitch and stepped up, saying, “OK, I’ll shoot my shot. If he kills me, well, YOLO!”

Esther had them apple-bottom jeans and boots with the fur. The whole court was looking at her. Luckily the king had taken his Klonopin that day, so he was more chill than usual. He wasn’t mad she showed up—instead, he asked her what she wanted, and she invited him and Haman over to a party she was throwing.

The king and Haman went to Esther’s party. The king asked her at dinner what she really wanted, like what would spark joy? She asked for them to go to a second feast the next day.

Haman was thrilled he was finally a VIP, hanging out with the queen and stuff. But his mood went south immediately when he saw Mordechai outside the palace gate, as Mordy never did put respek on his name.

Haman went home and had quite the bitch sesh with his friends and Zeresh, his wife. He was like, “Fam, I’m really popular. But as long as I see Mordechai the Jew, I’ll never be happy. SAD!” Zeresh suggested Haman build gallows and get the king to sign off on hanging Mordechai. Haman was like, “Big mood!” and built the gallows.

But that night, the king had ye olde insomnia. He watched some ASMR and read old entries on his blog to zone out. He discovered the blog post about those two asshole servants who wanted to kill him, and how Mordechai had stopped that shit. Ahasuerus realized he had never said thank you to Mordechai for saving his life, never even sent him an Edible Arrangement, or got him a gift card to Whole Foods, paid his gas bill, nada. As we have established, Ahasuerus wasn’t a good independent thinker, so he summoned the first person he could find lurking about the palace. It was Haman, natch. The king asked Haman what he thought a super A+ present would be for a “special someone.” Haman really thought it was his time to shine. He suggested the king give this person some Versace couture and a huge Cadillac Escalade, and go around the city and just flex.

Ahasuerus thought that was a great idea! And ordered Haman to do all of that…for Mordechai! #Facepalm. Haman had to be the hype man for Mordy all day, and then went home to rage about it to Zeresh for a while before it was time to put on some fresh sneaks for Esther’s second party.

Haman took a zillion photos of the food for Instagram to prove he was there to his, like, three followers.

Ahasuerus again told Esther she could ask him for anything, and he would grant it to her. She called on the strength of the Spice Girls and said, “Yooooooo, I’ll tell you what I want, what I really, really want!” And he said, “So tell me what you want, what you really, really want?” And she replied, “If you want my future, understand my past. If you wanna get with me, better make it fast. ‘Cause someone out here, tryna kill your wife. Get your act together and save everybody’s life!”

King Ahasuerus wasn’t that quick on the uptake or modified ‘90s lyrics. And Esther, exasperated, tried some Ariana: “Been through some bad shit. I should be a sad bitch. Who woulda thought it’d turn me to a savage? Surprise, I’m Jewish, and Haman is the villain of this story!” And lo, Haman whispered to himself, “Oh, shit.”

King had to wrap his tiny mind around what he just learned and went outside for some fresh air #BRB. Haman ran over to Esther’s personal space to beg her for his life. Then the king returned out of the palace garden, and the optics were pretty bad: Haman was right up on Esther, like someone you’d do your best to avoid on public transportation. Then said the king, “WYD, you perv?!” The servants covered Haman’s face because he was #canceled in the eyes of Ahasuerus.

One of the servants came thru and helpfully pointed out that Haman had built gallows for Mordechai. For once in his damn life, Ahasuerus had a good idea. He told his servants to hang Haman on the gallows instead. #KarmaIsABitch.

Esther told the king that Mordechai was fam, and she asked the king to stop the impending massacre of the Jews that Haman had planned. The king granted her access to his verified Twitter account and all his followers, and lo she tweeted that Ahasuerus was a true #ally and that Jews had a #right to fight back!

This was huge. The month of Adar rolled up, and the Jews gathered together. Even the rulers of each province decided they were always #TeamEsther and decided to help. The Jews were able to kill all their attackers. In Shushan on the 13th of Adar, the Jews killed hundreds of anti-Semites, and (yay!) the 10 sons of Haman also got what was coming to them. More were killed over the next two days, and in the end the Jews won! #pwnd

And the Jews sent joyful gifs and memes to each other and planned to keep the 14th and 15th of Adar as a holiday to remember that damn it feels good to be a gangster. On Purim to this day, Jews exchange gifts, give charity and party like rock stars to remember how bad bitch Queen Esther and #BDE Mordechai saved the Jews from annihilation back in the day. #Blessed.