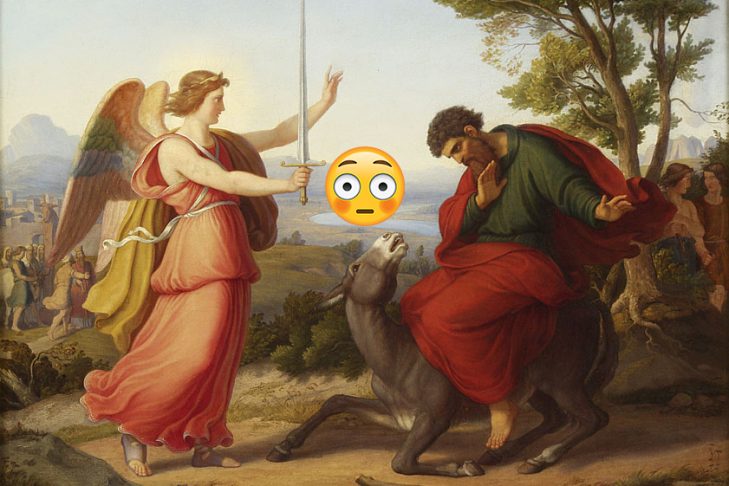 Every week, Jews around the world read a section of the Torah. This portion is called the Parshat (or Parsha), and the full cycle of the complete Torah readings takes place over one Jewish year. #Blessed. Parshat Balak, from the book of Bamidbar (Numbers), will be read on July 20, 2019. To read the full Parsha text, click here.

Moses and the Israelites were just doing donuts around the desert after leaving Egypt, kickin’ ass left and right on their way to the land of Israel. The Kingdom of Moab was queued up next and Balak, king of Moab, had a bad feeling about this. He saw how many Israelites there were, and lo, he said “Ew!” He sent his messengers to meet up with Balaam, a seer with mad clout and the ability to do really effective blessings or curses. Balak wanted to do a collab with him to design a custom curse for the Israelites, so he might actually win a battle against them.

Balaam welcomed the messengers to his desert oasis Airbnb and had them chill out while he had a ‘lil private convo with God. God was like, “Wait, do you have someone over?” and Balaam said, “It’s cool! It’s just this guy Balak who sent his bros over to get me to curse the Israelites, so I was thinkin’ about it.” And lo, God replied, “Thou shalt take a hard pass! The Israelites are, very literally, my peeps. Don’t mess.” Balaam woke up the next morning and told the squad of Balak that, sorry, he couldn’t help, no matter how much free swag Balak wanted to hook him up with or how much he’d get from an Instagram #sponsored #ad endorsement of Moab. Balak then sent more requests, by human messengers, Facebook Messenger, tweets, DMs, texts, even faxes, begging Balaam for help, ASAP. This time, God said unto Balaam, “OK, fine, thou shalt go. But you have to do exactly as I tell you.”

The next morning, Balaam’s alarm went off and he got up and saddled a donkey to go meet Balak. An angel from God was standing in the middle of the road holding a sword, but Balaam was texting while driving and couldn’t see it. The donkey, who believed in sharing the road, merged into a different lane. And lo, Balaam suffered from some serious road rage and hit the donkey. This happened three times. Finally, the donkey said, “Honestly, Balaam, WTF?! I’m gonna call PETA on you. I might be a donkey, but YOU are the real ass here.” Balaam looked up and saw the angel with his own eyes. The angel spoke and said, “I’m with the donkey on this. Balaam, WTF? Why did you hit this donkey, who very reasonably avoided running over an angel holding a sword, who happened to be me? I’m ALSO gonna call PETA on you. Pro tip: Learn to obey the rules of the road or call an Uber.” The angel then gave Balaam a ticket.

Balaam realized he was really lacking in wokeness on a basic animal-rights level and apologized to the angel. (But not to the donkey. Classic. #NotAllMen.) The angel told him to keep going to Balak but to recognize he could only say what God wanted him to.

Balaam finally got to Moab, and he and Balak looked out over the encampment of the Israelites. Balaam said, “Look, dude. I’m here, but I’m only gonna say what God wants me to say. He was VERY clear about that. So, build seven altars for some sacrifices mad quick. I have to bless the Israelites.” And Balak said, “Um, OK, but I actually want the opposite thing? So, if you aren’t going to curse them, could you maybe just avoid blessing them? We can go somewhere else and maybe curse them from there if you’d feel better about it?” And Balak sighed and looked at the camera like Jim from “The Office.” They went to another vantage point, but guess what? Balaam blessed the Israelites from there. He had some very flattering things to say about them and also some pretty heavy stuff about the End of Days and how it won’t go well for enemies of the Jews. Balak was mad heated and told Balaam to be so kind as to GTFOM (Get the Fuck Out of Moab), which he did. While the parsha does not say what happened to the donkey, we can hope she quit for a better work environment and a living wage.

The parsha then takes a dramatic turn into a very awkward bit of plotline involving the Israelites and Moab. The Israelites camped in a place called Shittim. (And no, I didn’t make up that place name for comedic effect. It’s in the Torah. Check it out.) Some of the Israelites make questionable choices God didn’t like—namely, they hooked up with some hotties from Moab, and they allowed the Moabites to make sacrifices to their own gods. If there is one thing God HATES, it’s when people don’t put respek on His Name as the one and only real deal, uppercase OG God.

He spoke to Moses and said, “Hey, Moshe, remember how I had you kill like a WHOLE BUNCH of Israelites after the whole golden calf thing?” And Moses said, “Yeah…it’s been very hard to forget something like that. I’ve been wandering the desert looking for a qualified therapist for 40 years.” Moses’ stress levels did not matter, and God commanded Moses to hang all the Israelites who were participating in idol worship and illicit Moabite hookups. Moses, in turn, voluntold the judges of Israel to do this. Pinchas, Aaron’s enthusiastic grandson, took things a step further and killed the final couple with a very dramatic Vlad the Impaler approach, skewering them both with a spear like a kebab. And everyone (who survived) was happy, except those of us reading this now, because damn, that’s harsh.