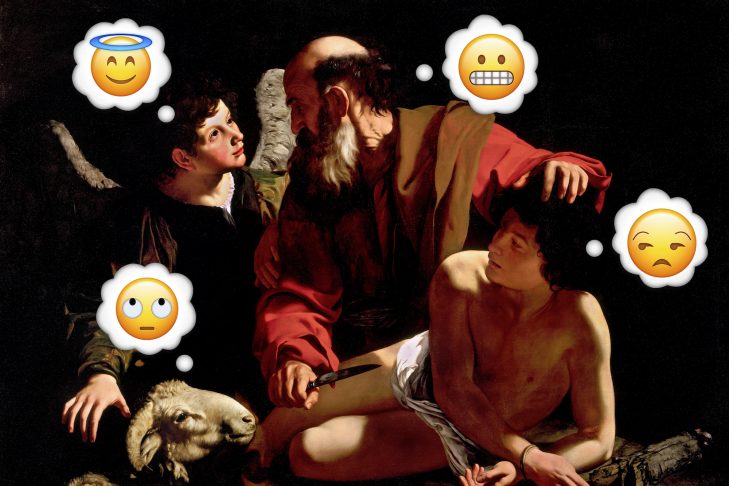 The “Binding of Isaac,” aka the “Akedah,” is one of the best known and, frankly, one of the most f*cked up stories in the Torah (just keepin’ it real here). The TL;DR version: God tells Abraham to sacrifice his son, Isaac. At the last minute, God sends an angel to stop Abraham and point him to a conveniently placed ram to sacrifice instead.

The story, from Parshat Vayera, is traditionally read on the second day of Rosh Hashanah. References to the Akedah infuse the Rosh Hashanah liturgy, and the Akedah is symbolically linked to the blowing of the shofar, a ram’s horn. On Rosh Hashanah, we ask that God “remember us for life,” just as Isaac’s life was spared. #Mood

God was feeling some type of way. He messaged Abraham on WhatsApp saying, “Yo, Abraham.”

“S’up?” Abraham responded from his tent in Beer Sheva.

God replied: “There’s this new viral challenge I want you to try. It’s like the Bottle Cap Challenge, but waaaay worse!” Then He added the laugh/cry emoji. And Abraham wondered which awful challenge it was, having been under the impression that everyone was collectively done with both the Cinnamon Challenge and the Tide Pod Challenge. But God then said, “Take your bb, your son Isaac, whom you #love, and offer him as a burnt offering #sacrifice on one of the mountains.” Then God used the prayer hands emoji, so Abraham knew He meant it.

And lo, best #parenting practices be damned, Abraham rolled with this plan. Without discussing it with his wife, Sarah, first, he took Isaac, two servants, some chopped wood and a knife, loaded up his donkey and went on a road trip. On the third day, Waze showed Abraham where God had dropped a location pin. Abraham parallel-parked the donkey, left the servants to keep an eye out for towing and took Isaac, the wood for the offering and the knife up the mountain.

Isaac got high-key suspicious. He said to Abraham, “Yo, Dad?”

“Yeah, so, we’ve got fire, wood and a knife sharper than Chris Hemsworth’s jawline, but I’m not seeing a lamb for an offering or a local, sustainable, family-owned meat co-op where we could get a lamb. What are we going to do for the actual offering part of this sacrifice? I kinda get the feeling that this burnt offering is going to be lit, but in a bad way,” said Isaac.

Abraham said, “LOLZ, no worries! God will make sure that we have a lamb for the offering, my son.” They came to the place of which God had messaged him about, and Abraham built an altar and arranged the wood. He bound Isaac and put him on the altar. “WTF, Dad! Not cool! #FML!” said Isaac. Abraham grabbed the knife to straight up murderize Isaac, but an angel of God called to him from heaven and said, “HEY! Abraham! Abraham!”

“Uh, yes?” said Abraham. And God said, “Whoa, OK, slow your roll! You passed the test. You did the “Almost Kill Your Son For Me” challenge! It was kind of a dick move for Me to do this, but your willingness to be so extra totally proved you are totes My BFF for realz. I heart you.”

Abraham did feel, TBH, that perhaps God could have chosen a different way to test him, but you know, whatever. He was surprisingly un-salty about it. He looked up and, behold! He saw a ram stuck in a hedge. And lo, the ram said, “WTF, Abraham. Not cool. GTF away from me. Has no one told you guys about Impossible Burgers yet?!” Apparently not, because Abraham offered the ram as a burnt offering in place of Isaac, who was extremely relieved and also extremely in need of immediate therapy.

The angel called to Abraham a second time, saying, “God told me to tell you that because you totally fell for it and were down to kill your son, we’re gonna finesse this whole situation. Now you get a reward: Your descendants will be as numerous as popular memes from “The Office,” as many as all the secondary characters in the Marvel Cinematic Universe! Your descendants, the Jews, shall be a people who will kick ass and take names!”

Abraham thought he might have liked running water in his tent or perhaps a magical way to keep sand out of his beard as a reward, but he kept that on the DL. He and Isaac returned to the parking lot, collected the servants (who had just been lazily swiping on Tinder this whole time) and the donkey, and went back home to Beer Sheva. Isaac decided that maybe it would be healthy to bounce and get away from his #fam for a bit, and looked for a great Groupon deal for a relaxing vacation in Mesopotamia, where he could just chill and flex for the ‘gram without fear of getting sacrificed by his own dad.

And that’s the #ICYMI story of the Akedah! May all of us, like Isaac, be remembered for life, and be signed and sealed for a good year in which we all get to go on vacation, and just chill and flex for the ‘gram. #5779 is #canceled. We stan #5780!