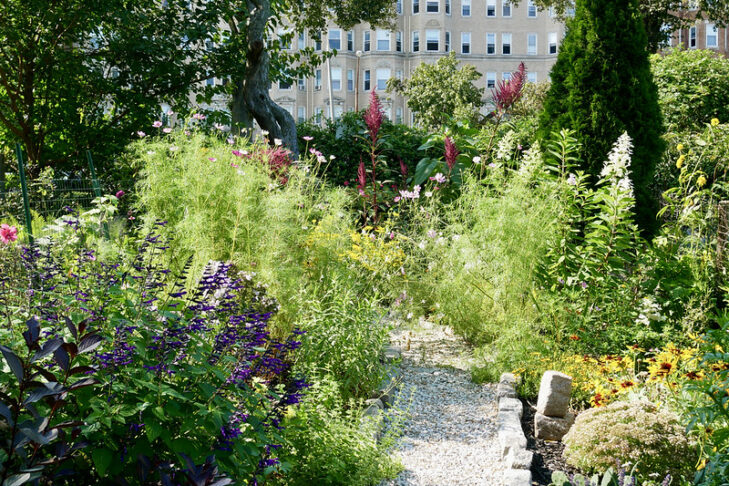 Did you know that Boston is home to the fourth-largest Jewish community in the United States? However, according to the authors of “111 Places in Boston That You Must Not Miss,” Boston’s Jewish history started relatively late. Heather Kapplow and Kim Windyka said it wasn’t until the mid-19th-century that a critical mass of Eastern European Jewish immigrants settled in the city. “[To that end], our book works in a broad way,” Kapplow said. “Many of Boston’s Jewish sites are under the radar. You sometimes have to make these looser Jewish ties to places in Boston to tell an interesting story of the city’s early Jewish roots.” 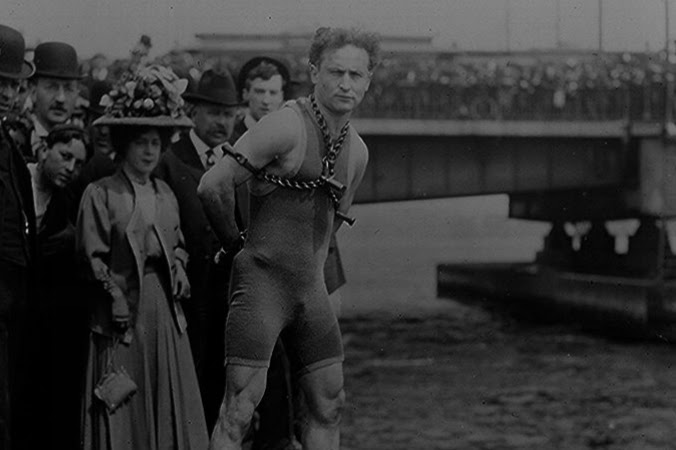 Harry Houdini jumps off the Harvard Bridge into the Charles River in 1908 (Photo: Library of Congress Prints and Photographs Division)

One of those under-the-radar sites is a plaque on the Massachusetts Avenue Bridge between Massachusetts Institute of Technology and Back Bay that marks the place where the famous Jewish magician, Harry Houdini—born Erik Weisz—did a promotional stunt on May 1, 1908. Kapplow noted that in typical Houdini fashion, the magician was bound in chains and remained under the muddy water “for enough time to scare everybody. He freed himself and swum to the surface. This was in early May, so the water was cold. The Boston Society of Magicians placed the plaque to commemorate the moment.” 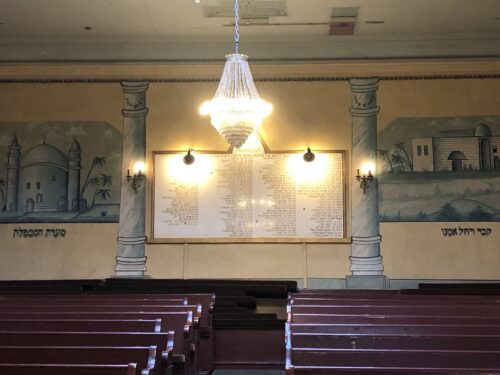 Kapplow and Windyka recommend that any tour of Jewish Boston sites should include a visit to the Vilna Shul in the city’s West End. After occupying temporary homes in the neighborhood, the shul’s first cornerstone was laid in 1919 at its current location, 18 Philips St. By the late 1990s, the shul had fallen into disrepair, until a group of Jewish leaders in Boston undertook an ambitious campaign to revive the building. As a result, the Vilna Shul is once again a thriving institution, serving primarily as a cultural center. Monthly tours are offered of the historic building where, among other things, visitors can see recently restored murals of 20th-century folk art, evoking the sweep of immigration in the West End. 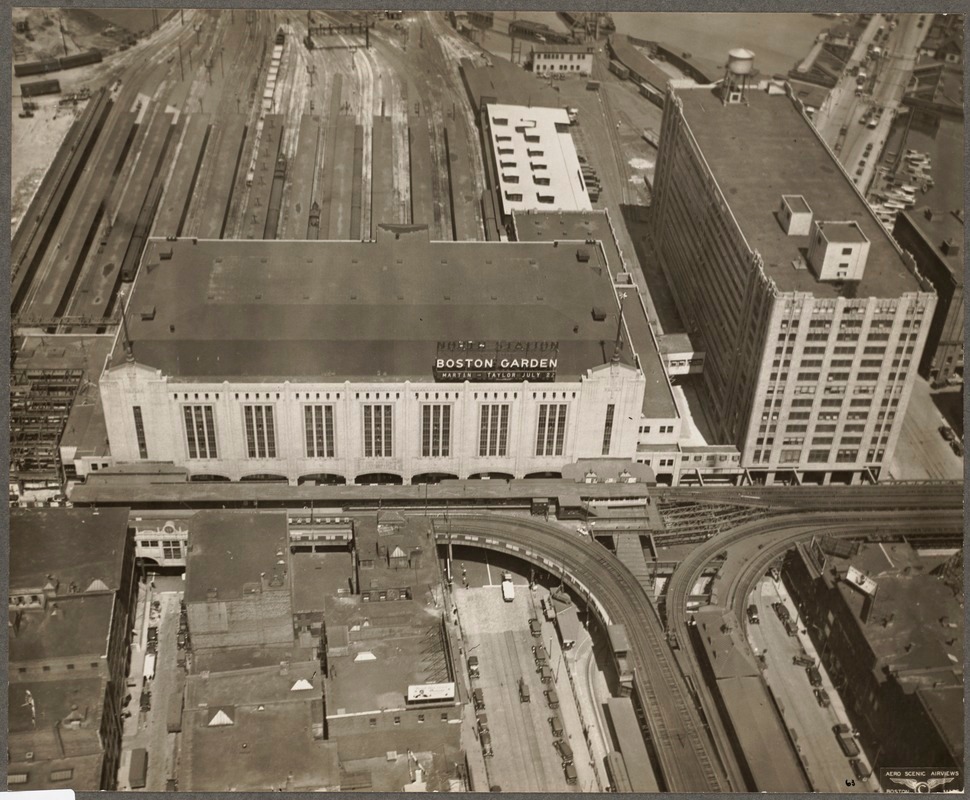 The West End Museum, an 1,100-square-foot exhibition space on Staniford Street, is another story-filled attraction (though it’s temporarily closed due to flooding). It presents itself as “a neighborhood museum dedicated to the collection, preservation and interpretation of the history and culture of the West End of Boston.” Perusing its archives online, I came upon the story of Rose Berger Kubitsky, who immigrated to the United States from Poland in 1907 after her mother died in a pogrom. At 9 years old, she was passed off to various relatives and finally made her way to Boston’s West End after she married Alex Berger. Rose became the sole owner of Berger’s Deli after her husband died in 1934. The deli’s moves reflected the urban renewal happening in the neighborhood until its block was razed in the 1950s. As Rose noted, she was always “one step ahead of the wrecking ball.” Eventually, she ran the bar as a tavern in another nearby location until she sold it in 1975.

The wrecking ball also razed the tenements of the West End to make way for Massachusetts General Hospital’s ongoing expansion. The late actor Leonard Nimoy of “Star Trek” fame was born in 1931 in Boston’s West End to parents who had fled Ukraine. In an interview with Yiddish Book Center, Nimoy remembered that his old neighborhood carried “the scent of leather, the sound of Yiddish. It was an example of Yiddish life and the site of cultural exchange for Jewish immigrants and their neighborhood. It was a village within the city.” Nimoy also remembered that the West End included a Yiddish shopping center on Spring Street with a kosher butcher and a Jewish bakery, his grandfather’s leather shop, his father’s barbershop and the Italian iceman who spoke fluent Yiddish to his customers. “It was a real and healthy way to grow up and to learn about other cultures,” he said. 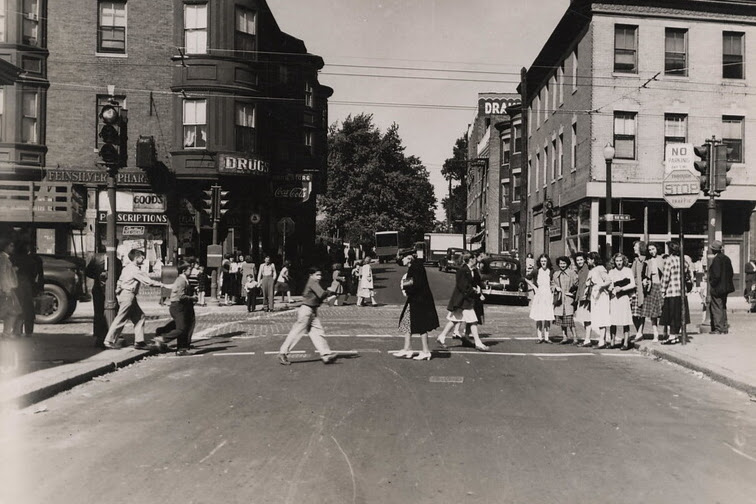 Kapplow and Windyka point out that by the 1930s, ‘40s and ‘50s, Jewish neighborhoods extended to Dorchester, Roxbury and Blue Hill Avenue, Dorchester’s central artery. According to the Yiddish Book Center archives, residents described spending Shabbat in the park off Blue Hill Avenue, having opportunities to see Yiddish plays and the availability of seven Yiddish newspapers. Eventually, most Jews in those urban neighborhoods migrated to Newton, Brookline and Sharon. 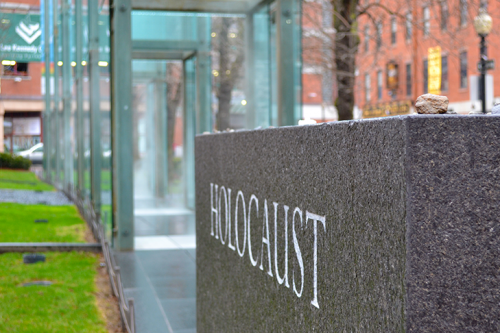 The nearby Freedom Trail is an extended tour of early American history that also includes the New England Holocaust Memorial near Faneuil Hall and Quincy Market. The memorial is composed of six glass towers, symbolizing the 6 million Jews murdered in the Holocaust. They are meant to glean light from darkness. Plans are in the works for a new Holocaust museum and educational center to be located on the Freedom Trail next to the Holocaust Memorial. 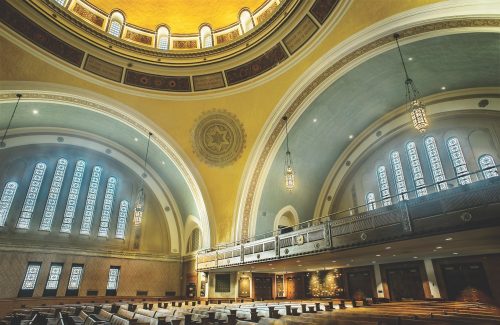 Temple Ohabei Shalom was founded in 1843 in Brookline. It is the oldest continuous serving congregation in Massachusetts (after the Touro Synagogue in Rhode Island). That makes Ohabei Shalom the second-oldest synagogue in New England. Ohabei Shalom occupied several locations before Beacon Street, including one in the South End. Ground was broken to build the Byzantine-Romanesque edifice in 1921, and the synagogue welcomed its first congregants in 1928. (You can call ahead to tour the historic sanctuary.) 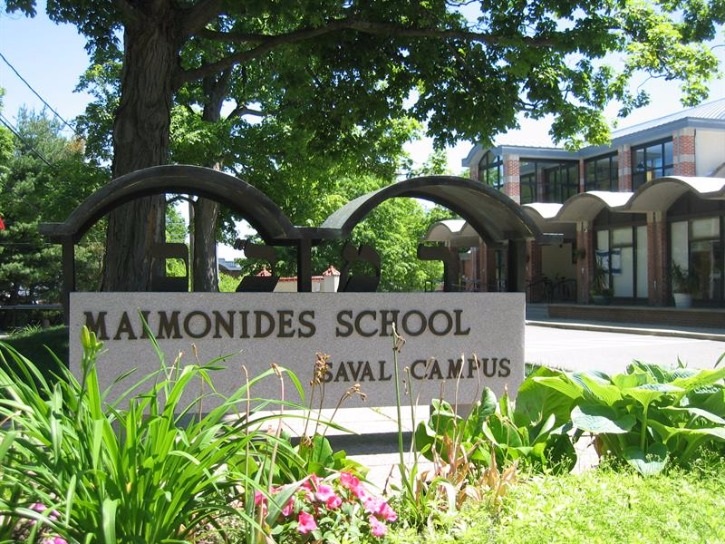 Maimonides School, founded by Rabbi Joseph Soloveitchik in 1937, is nearby on Route 9 in Brookline. The Orthodox day school was innovative at the time for its groundbreaking co-education in which girls received the same Jewish education as boys. Today, the K-12 school is a well-regarded educational institution. 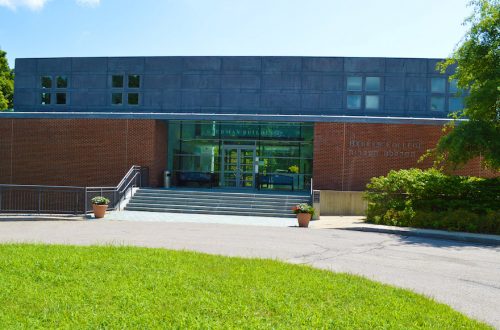 Israeli architect Moshe Safdie designed the suburban Boston home of Hebrew College, where it has been headquartered since 2002 (Photo: Hebrew College)

Hebrew Teacher’s College, now Hebrew College, was founded in 1927. In its 95-year history, the college has had campuses in Brookline and Newton and has expanded its educational offerings through the decades. This expansion includes the formation of Me’ah, a unique adult Jewish learning curriculum developed in 1994, and the addition of a rabbinical school in the early 2000s. The college regularly sponsors Jewish art exhibitions (check its website for the latest exhibits). 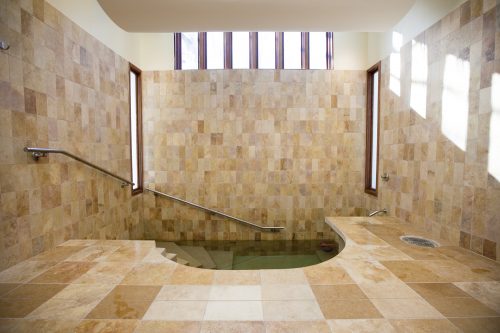 Further west in Newton is Mayyim Hayyim, a community mikveh that opened in 2004. Mayyim Hayyim takes pride in being a 21st-century creation of the ancient tradition of immersing in a ritual bath. Traditionally, women used the mikveh for centuries in anticipation of marriage and then monthly after menstruation. Mayyim Hayyim serves a wide swath of the Jewish community with its innovative ceremonies commemorating diverse life events such as b’mitzvahs, coming out, marking a life transition, like a birthday, or miscarrying a pregnancy. The mikveh also offers innovative educational programming and houses exhibitions in its art gallery. (Tours of the mikveh and art gallery are available by appointment.) 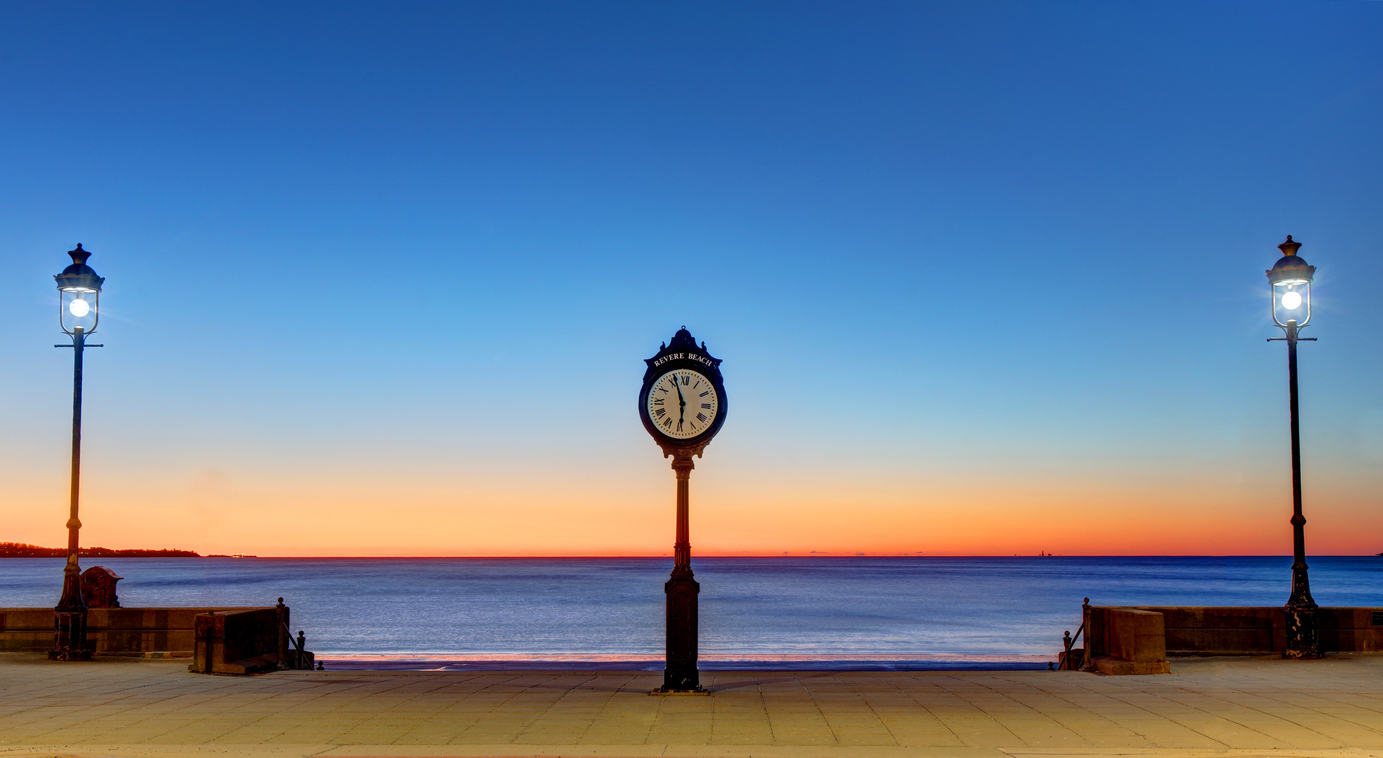 Revere Beach, which became the first public beach in the United States in 1896 (Photo: DenisTangneyJr/iStock)

Venturing farther afield, Kapplow and Windyka note that visiting Revere Beach resonates with Boston’s immigrant history. Before Revere is completely developed, the two travel writers suggest taking in the beach’s atmosphere as a “shore where many people have landed.” In addition, nearby Chelsea has a rich Jewish history, replete with older synagogues that welcome visitors.

The Fenway Victory Gardens and Garden of Peace 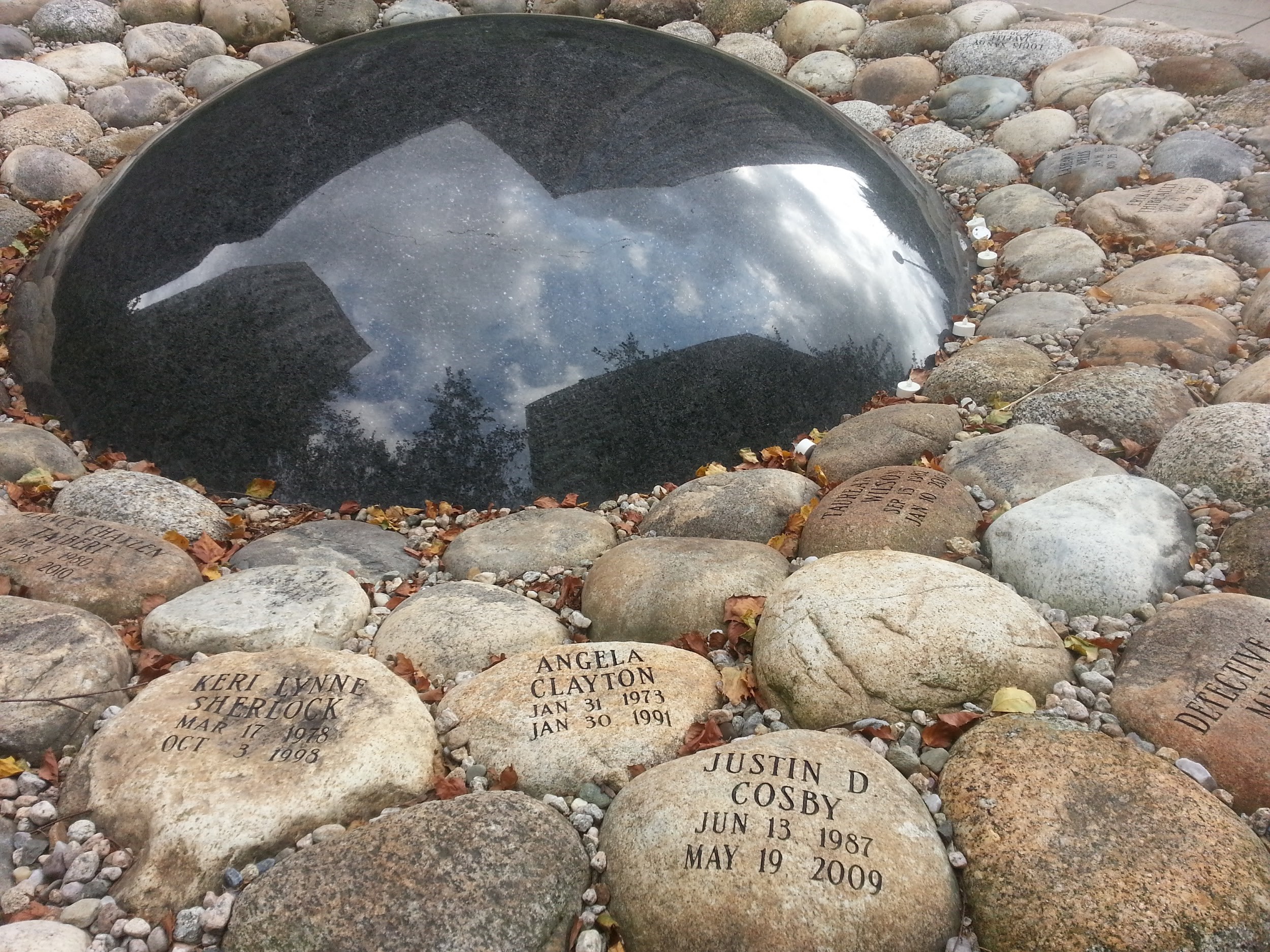 The duo recommends sitting and taking stock in two of the city’s gardens after a day of touring. The Fenway Victory Gardens were planted during World War II and have bloomed since 1942. Garden of Peace is a Kaddish-like space behind the State House at Park Street, honoring homicide victims in the city of Boston. “It’s a family-built memorial,” said Kapplow. “There’s a little riverbed of stones carved with people’s names. It’s a beautiful, contemplative space.”

What’s your favorite Jewish site in Boston? Let us know in the comments!